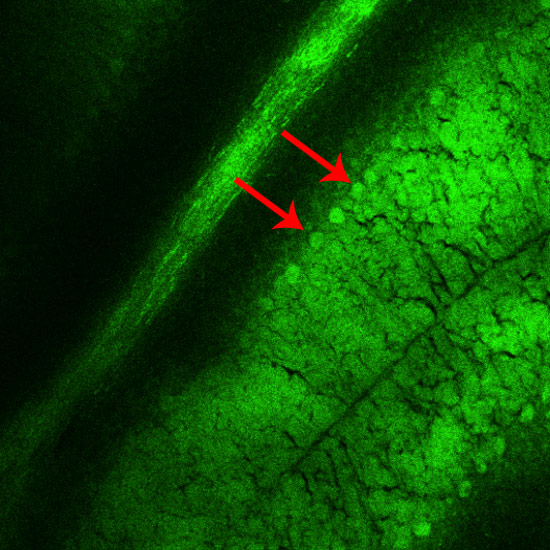 C.D. Russo Green lantern: A fluorescent probe shows that Purkinje cells (red arrows) and other cells in the mouse cerebellum express androgen receptor, so this part of the brain can be shaped by sex hormones during development.

Injecting estrogen into the brain can improve autism-like features in male mice that lack reelin, a protein implicated in autism, researchers report in a pair of papers published over the past year. The finding provides clues that may explain why autism is more common in boys than in girls.

In recent years, scientists have been probing the role of sex hormones such as estrogen and testosterone in autism’s gender bias. But there’s been little direct evidence of how these molecules operate in the developing brain, especially in regions linked to autism.

“These two papers actually provide some very crucial bridging evidence, and suggest a mechanism through which sex steroids might be having an impact,” says Bhismadev Chakrabarti, senior researcher at the Autism Research Centre at Cambridge University in the U.K., who was not involved in the work.

The new studies, led by Flavio Keller, professor of human physiology and head of the lab of developmental neuroscience at the University Campus Bio-Medico in Rome, involve genetically-altered mice that are deficient in reelin, which helps nerve cells migrate, lock into their proper positions and form connections with one another. The reelin-deficient mice show structural changes in the brain and behavior patterns similar to those seen in people with autism. But estrogen reverses these effects, the researchers found.

“Reelin has been one of the very strong autism candidate genes for a while now,” says Chakrabarti. People with autism have lower levels of reelin, and the reelin gene, RELN, has been implicated in a number of studies of autism genetics over the past decade.

In Slovakia, for instance, researchers have found that boys with autism have, on average, a higher number of GGC repeats in a certain part of the reelin gene than do healthy controls1. More GGC repeats can result in lower levels of reelin expression2.

The animals in the new studies, called ‘reeler’ mice, have one defective copy of the reelin gene and make about half the amount of reelin compared with controls. Reeler mice that have two defective copies of the gene also exist, but they have severe motor impairments and other neurological abnormalities that make them unsuitable for autism studies, Keller says.

Reeler mice with one faulty copy serve as a model of one of the most well-established neuro-anatomical abnormalities in autism. Since the mid-1980s, scientists have known that people with autism have fewer Purkinje cells in the cerebellum than normal. These cells integrate information from throughout the cerebellum and relay it to other parts of the brain, particularly the cerebral cortex.

But there’s a twist: both male and female reeler mice have less reelin than control mice, but only the males lose Purkinje cells.

“So this means that it is not just the mutation, not just the reduced reelin levels, that are responsible for this Purkinje cell loss, but this must interact with something related to gender,” Keller says.

Keller devised a series of experiments with reeler mice to test the ‘extreme male brain’ hypothesis,
proposed by psychologist Simon Baron-Cohen, director of the Autism Research Centre at Cambridge University.

This hypothesis holds that behaviors typical of autism are an exaggeration of normal or typical male behaviors, likely due to an imbalance of sex hormone levels during fetal development.

Keller and his team investigated whether the differences between males and females could yield insights into the underlying mechanisms of autism.

In one of the studies, the researchers found that five days after birth, reeler mice have higher levels of testosterone in the cerebellum compared with genetically normal males3.

Keller’s team then injected estradiol — a form of the female sex hormone estrogen — into the brains of 5-day-old mice. In the male reeler mice, this treatment increases reelin levels in the cerebellum and partially blocks Purkinje cell loss. Giving more estrogen to female reeler mice has no effect — but females injected with tamoxifen, an estrogen blocker, lose Purkinje cells.

Those results are in tune with the extreme maleness of the brain in autism, says Patrick Hof, professor of neuroscience at Mount Sinai School of Medicine in New York, who was not involved in the study. However, he cautions, reeler males treated with estrogen still have fewer Purkinje cells than the controls do.

“And we saw indeed that the reeler mice are slower to switch. They tend to persevere in the old strategy,” Keller says. However, male reeler mice treated with estrogen at 5 days old show improved cognitive flexibility as adults, suggesting that the estrogen has a long-term effect.

Whether the same sex differences in Purkinje cell numbers are also seen in people is as yet unclear.

A team led by Margaret Bauman, director of the LADDERS Program of the Lurie Family Autism Center at Massachusetts General Hospital is measuring the density of Purkinje cells in the postmortem brains of people with autism — ranging in age from 4 to 56 — who died of other causes.

“We haven’t had that many female cases to really answer the question,” says Bauman, who conducted some of the first research on autism neuroanatomy in the 1980s. The study only includes samples from three women with autism so far, and the researchers are hoping to add to that number.

Meanwhile, Keller is continuing to investigate the reeler mouse model. “It will need a lot of time and research to disentangle what estrogens and androgens are doing in brain development,” he says.

His group is trying to determine how exposure to different sex hormones affects the survival of mouse Purkinje cells. The researchers are also blocking testosterone in reeler mice while they are still in the womb to see if this decreases Purkinje cell loss. “I think this is really the crucial test of the role of testosterone during fetal life,” Keller says.