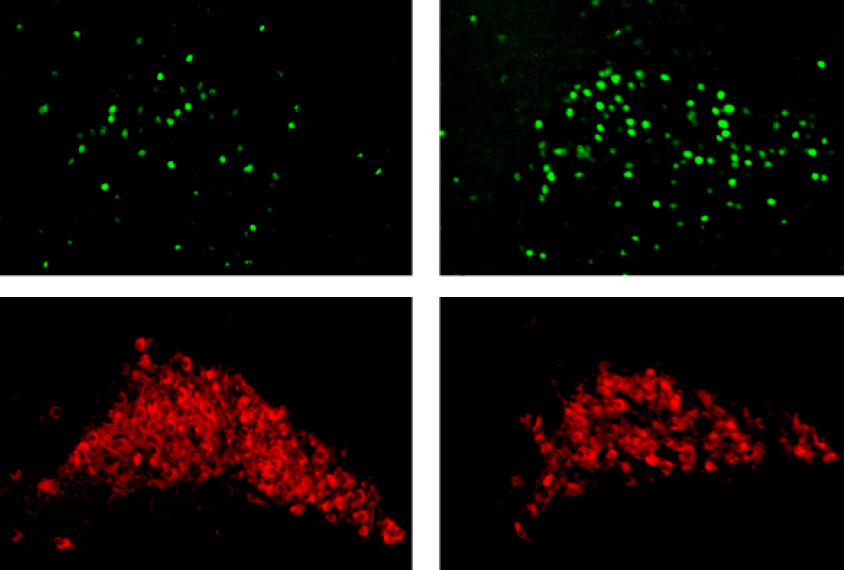 Noradrenaline shortage: In the locus coeruleus of 16p11.2 mutant mice (top left), noradrenergic neurons were less active than in the same brain area of control mice (top right), whereas dopaminergic neurons (bottom) did not significantly differ.

Dysfunction in a brain circuit that regulates movement may contribute to some of the motor learning difficulties associated with autism, according to a new mouse study.

The mice lack one copy of a chromosomal region called 16p11.2. Up to about one-third of people with this deletion have autism, and some have speech and motor problems. Most autistic people have motor difficulties and show delays in developmental milestones such as standing and walking.

The 16p mice, too, are slow to learn new motor tasks, such as balancing on a spinning rod. The explanation seems to be a shortage of the neurotransmitter noradrenaline in the motor cortex, which helps coordinate and execute movements. The dearth originates in the locus coeruleus, a part of the brainstem that serves as the brain’s main source of the chemical.

“Noradrenaline is known to be involved in modulating the excitability of neurons,” says lead researcher Simon Chen, assistant professor of cellular and molecular medicine at the University of Ottawa in Ontario, Canada. “When there’s low noradrenaline in the motor cortex and the mouse is learning a movement, it takes them longer for the neural circuits to consolidate neurons that are important to control movement.”

The learning process is similar for people, Chen says. When learning how to walk, for instance, a child loses her footing and falls many times. But once in a while, she will take a few more steps than she did in the previous attempt, and the brain remembers the movement that made that possible.

This kind of precision approach — starting with a genetic factor and then asking exactly what it is affecting and what can be done about it — is exciting and promising, says Santhosh Girirajan, associate professor of genomics at Pennsylvania State University in University Park, who was not involved in the work.

“What these guys did is amazing,” Girirajan says. “At the end of the day, all we are talking about is connecting genetics to physiology.”

Chen’s team put the 16p mice through two tests of motor learning: In one, mice attempt to balance on top of a rotating rod, and in the other, they spin a disk with their feet. The model mice took longer than wildtype mice to learn both tasks but, given enough training, eventually performed just as well.

Two-photon imaging showed that neurons in the motor cortex were significantly more active in the 16p mice than in the controls during the early stages of learning. What’s more, as these neurons formed new dendritic spines — tiny nubs that receive signals from other neurons — they took longer to prune away old ones that were no longer needed.

This observation suggests that the mice learn slowly because their neurons struggle to reorganize their spines efficiently and, as a result, process too many signals all at once, Chen says.

These differences result in a shortage of noradrenaline in the motor cortex, which impairs neurons’ ability to reorganize, Chen says.

The work appeared in March in Nature Neuroscience.

To correct the noradrenaline deficit, Chen’s team turned to a technique called chemogenetics. They injected the model mice with a virus that causes noradrenergic neurons in the locus coeruleus to activate in the presence of a synthetic drug.

After they injected the model mice with the drug, the animals learned the motor tasks as quickly as controls did. The treatment also normalized the rate of spine remodeling in the motor cortex.

The mice were at least 12 weeks old — the mouse equivalent of adulthood — at the time of the treatment. Reversing a genetically linked trait at that age is impressive, Girirajan says. “That’s a part [of the study] that excited me.”

Other drugs that increase the availability of noradrenaline in the brain could improve learning issues in children with 16p11.2 mutations, Chen says. His team plans to test this idea in the 16p mice.