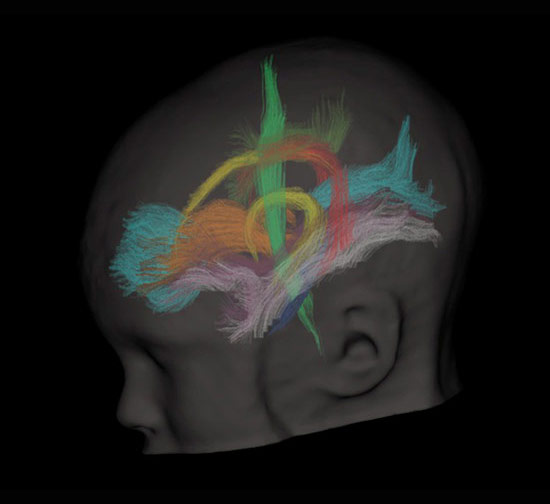 Long bundles of neurons that connect key regions in the brain develop abnormally in the first year of life in children with autism, according to new findings presented Friday at the International Meeting for Autism Research in San Diego.

These long-distance connections normally mature very slowly during childhood and adolescence. Diffusion tensor imaging — which traces the flow of water molecules through the brain — shows that in those with autism, the tracts grow much faster than average, said Eric Courchesne, director of the Autism Center of Excellence at the University of California, San Diego.

The rapid overgrowth prevents the brains of children with autism from forming functional connections, and may underlie the early emergence of autism symptoms, he said.

Courchesne’s team looked at 84 infants and toddlers aged 12 to 40 months with autism, recruited from pediatricians’ offices for a project on early diagnosis.

The researchers found abnormal growth in the superior longitudinal fasciculus, which connects the frontal and temporal lobes of the brain, crucial for the development of language. Between 12 and 24 months of age in children with autism, this tract matures too quickly. But the growth is short-lived: It slows down after 24 months of age, leading to faulty connectivity between their brain regions.

They found a similar pattern in the uncinate fasciculus — a hook-shaped bundle of neurons that connects the frontal cortex with the limbic system, which regulates emotion and behavior — and four other key circuits.

“High-order social, language and communication functions rely strongly on the normalcy and integrity of long-distance fiber connections,” said Courchesne. “Accelerated premature overdevelopment in these major connections may underlie the key symptoms of autism.”

Courchesne presented these findings, together with a slew of tantalizing new data, in a keynote address at the meeting Friday morning. 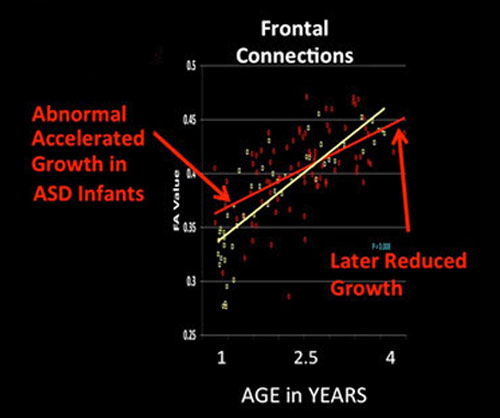 Growth curve: Connections in frontal regions of the brain mature too quickly in infants with autism.

He also discussed new work in his lab showing patches in the cortex of the developing brain in which brain cells have either failed to migrate or to transform into specialized types of neurons.

“These patchy defects are undoubtedly pathological,” he said.

Courchesne linked all this as yet unpublished data with his and others’ findings on abnormal brain size in young children with autism to call for more research into the development of autism brains.

“It was a stunning presentation,” said Daniel Geschwind, chair of human genetics at the University of California, Los Angeles. “[Courchesne] provided many testable models that will drive a lot of research.”

Several postmortem and imaging studies of adults with autism have found structural defects, ranging from fewer neurons and smaller volume in the amygdala, to a thinning of the cortex and the corpus callosum, a wide bundle of fibers connecting the right and left hemispheres of the brain.

However, very little is known about the way early brain development goes awry in autism, Courchesne said, partly because how the brain normally organizes itself in the first year or two of life is also poorly understood.

This is because of the limited amount of postmortem tissue available from either children with autism or healthy controls.

Imaging studies can help researchers make maximum use of the limited tissue available, he said, by pinpointing locations with the most useful information. “You can use the tissue in a more targeted way.”

In a separate study of postmortem brains from children with autism, his team also found that 102 genes are expressed at either higher or lower levels than average. These genes are linked to pathways important for controlling the number of cells, for making new neurons and for DNA repair.

If damaged neurons are not pruned, they proliferate in the brain, possibly driving their overabundance, and the overgrowth of connecting fibers, Courchesne said. All of this may lead to faulty connections between different brains regions.

The results may also have implications for treatment.

“There may be varying possibilities for recovery based on genetics,” Courchesne said. For example, some of the genes that are expressed at higher than normal levels in the brains of people with autism may be needed to fix defective connections.

That process could be boosted if researchers can identify molecular pathways that can be tweaked to enhance recovery and remodeling of brain circuits.

That idea resonated with researchers who heard the talk.

“It’s a new idea that might help us understand why some children respond to early intervention and others do not,” said Geraldine Dawson, chief science officer of Autism Speaks, one of the meeting’s sponsors. “We aren’t going to understand autism if we don’t adopt this dynamic developmental perspective.”