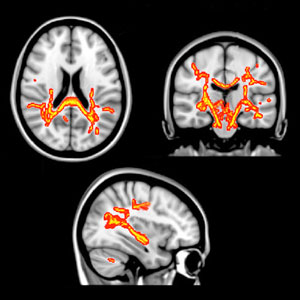 Telling tracts: Some long white-matter bundles (orange) are stronger in children who do not carry MET variants than in those who do.

MET, a leading candidate gene for autism risk, influences the strength of connections between brain regions involved in social behaviors, and this effect is especially prominent in people with the disorder. The findings are from a large study using several imaging techniques, published 6 September in Neuron1.

MET is expressed in several areas of the human brain that are active during social tasks. Several studies have shown that common variants in MET appear more frequently in people with autism than in controls2, and the link seems to be strongest in people with autism who have gastrointestinal problems. What’s more, MET’s expression is altered in the brains of people with autism, according to postmortem studies3.

The new report finds that children carrying a common, autism-linked variant in MET have weaker connections — as measured in both activity patterns and anatomy — between distant brain regions. This broadly agrees with a popular hypothesis that autism results from weak long-range connections in the brain, although that theory has lately been called into question.

The differences in connectivity appear in children with and without autism, but are more prominent in those with the disorder, the study found. Still, the data also indicate that MET is not the sole or even a primary factor in autism, as many study participants with the disorder don’t carry the variant.

“It highlights how all of these genetic factors are contributing to the disorder but they’re not necessarily leading to the disorder,”sayslead investigator Mirella Dapretto, professor of psychiatry and biobehavioral sciences at the University of California, Los Angeles.

The study is powerful, according to several experts, because it suggests that combining discoveries in genetics with technological advances in brain imaging can help researchers parse autism’s diversity.

“What the study offers us is the first glimpse into the fact that there is a discoverable relationship between genetic risk and changes in the brain structure and function,” notes Marlene Behrmann, professor of cognitive neuroscience at Carnegie Mellon University in Pittsburgh, who was not involved in the work.

Behrmann first saw the preliminary results at the 2011 Society for Neuroscience annual meeting in Washington, D.C. Since then, “I’ve been far more conscious and far more diligent in thinking about genetic underpinnings,” she says. “It was a wake-up call for me.”

The study is significantly larger than other analyses of its type, analyzing 75 children who have high-functioning autism and 87 controls overall.

Using different imaging techniques, the researchers measured brain activity in these individuals and trackedthe nerve bundles, or white matter, that connect one brain region to another. They also analyzed DNA from the participants’ saliva to determine the number of copies they carry of a specific MET variant — denoted with the letter C.

In one set of experiments using functional magnetic resonance imaging, the children lay in a brain scanner as they looked at pictures of faces showing different emotions. Regardless of whether they have an autism diagnosis, ‘CC’ participants show over-activation in the amygdala, a brain region involved in emotion processing, and the striatum, which is important for movement planning and memory.

The study also looked at brain activity while the participants rested passively in the scanner. The researchers focused on the default mode network, which is active when an individual is at rest, and seems to be poorly synchronized in individuals with autism.

In children with two C variants of MET, activity in the default mode network is not synchronized as tightly as in children who carry no MET variants, the study found.

Finally, the scientists used a technique called diffusion tensor imaging, which tracks the flow of water in nerve fibers to measure the strength of the brain’s anatomical bridges. Children with the CC type have less robust connections in several long white-matter tracts compared with children who carry other variants, the researchers found.

One of these tracts is the corpus callosum, which connects the brain’s right and left hemispheres and is abnormally small in some children with autism.

In all the imaging experiments, the risk variant’s effects are more pronounced in participants with autism than in typically developing children. Among children who carry a single C variant, those with autism show patterns similar to children (with or without autism)who have the CC variant, whereas those without autism are more similar to children who don’t have any C variants at all.

“[The MET variant] takes a bigger toll, if you will, in the brain of a child who develops autism,” Dapretto says.

This complexity, Dapretto adds, highlights one of the biggest unanswered questions in the autism field: why some carriers are vulnerable to autismwhereas other carriers are protected. “It could be a multiple-hit story,” she says.

Autism is thought by many to result from the combined effects of several genetic variants.

So far, common variants in only a handful of genes have been linked to autism: MET, the oxytocin receptor OXTR, and CNTNAP2, which is involved in communication between brain cells.

In 2010, Dapretto and her colleagues used functional magnetic resonance imaging to show that individuals who carry certain CNTNAP2 variants — regardless of whether they have autism — have weak connections between regions in the front and back of the brain4.

Mice lacking CNTNAP2 or MET also add heft to the argument. Last year, a study reported that mice missing MET have unusually strong short-range connections in the outer layers of the brain.

Still, precisely how connectivity is disrupted in the brains of children with autism is unclear, experts say.

Earlier this year, Kennedy reported at the International Meeting for Autism Research in Toronto that people with autism and typical controls have largely similar patterns of brain connectivity.

The connectivity hypothesis has come under fire in the past couple of years partly because of a common methodological issue. Children with autism are more likely than controls to move their heads while they are in a brain scanner, which can make long-range connections appear weaker than they actually are.

In the new study, the researchers note that the autism and control groups showed a similar range of head motion. Still, even tiny movements of a few individuals can affect imaging data, and the researchers did not use a new ‘scrubbing’ method recommended by some experts to control for the head motion.

“It worries me a little,” notes Damien Fair, assistant professor of behavioral neuroscience and psychiatry at Oregon Health and Science University, who was not involved in the study. “It’s one of the big problems that has kind of crept into the literature these days and has not been fully resolved.”