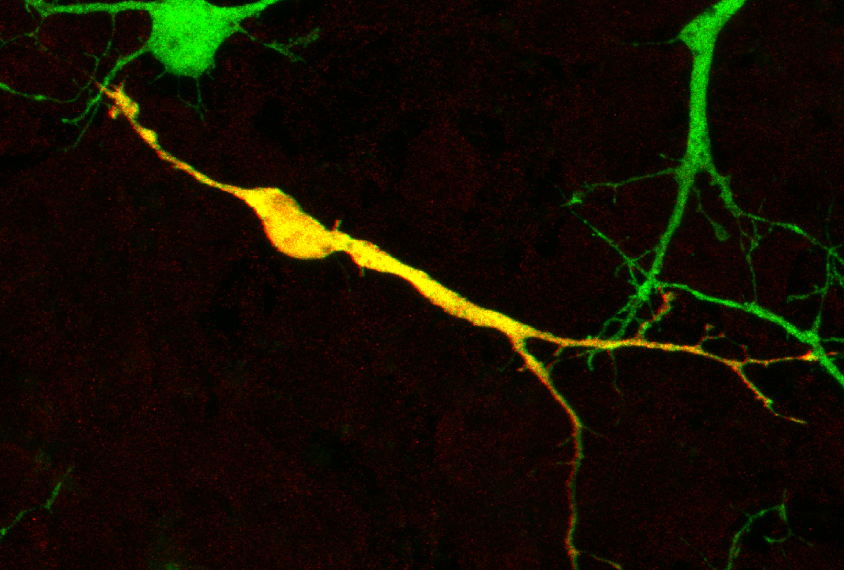 Inside out: Interneurons are born deep in the brain and then travel to the brain’s outer layer.

Image and video courtesy of Lara Eid and Elsa Rossignol

Deleting an autism gene called TRIO derails certain neurons’ journey to their destination in the brain. These neurons typically keep brain signals in check, so adolescent mice missing the gene have an excess of brain activity and experience seizures.

“We have revealed a new model of genetic neurodevelopmental disorders,” says Lara Eid, a postdoctoral fellow in Elsa Rossignol’s lab at the University of Montreal in Canada, who presented the findings. The work paves the way for scientists to test the effects of other genetic variants seen in people with epilepsy and autism, Eid says.

TRIO balances the activity of two enzymes that together control how neurons grow and migrate during fetal development. Variants in the gene have turned up in people with autism, epilepsy and intellectual disability. And the enzymes TRIO regulates — RhoA and Rac1 — are affected by multiple autism genes.

Eid and her colleagues bred mice that lack TRIO in interneurons, a type of neuron that dampens brain signals. Impairments in interneurons have turned up in autistic people and several animal models of the condition.

Interneurons are born deep in the developing brain and then travel to the cortex — the brain’s outer layer. They form branches and connections with other neurons along the way. The migration and branching process is controlled in part by the activity of RhoA and Rac1.

The researchers tracked the cells’ trek in brain slices from mouse embryos. Interneurons from mutant mice travel more slowly and cover less ground than those from controls. They also migrate in the wrong directions and form more branches.

Giving the mutant cells a working copy of TRIO that can activate RhoA (but not Rac1) prevents these problems. So too does providing them with an activated version of RhoA.

By contrast, giving them a copy of TRIO that can activate Rac1, or an activated version of Rac1, does not have these effects.

She says that her team has found similar, albeit milder, neuron migration problems in mice missing a single copy of TRIO, and in mice with mutations in TRIO that cause autism-like behaviors but not seizures.