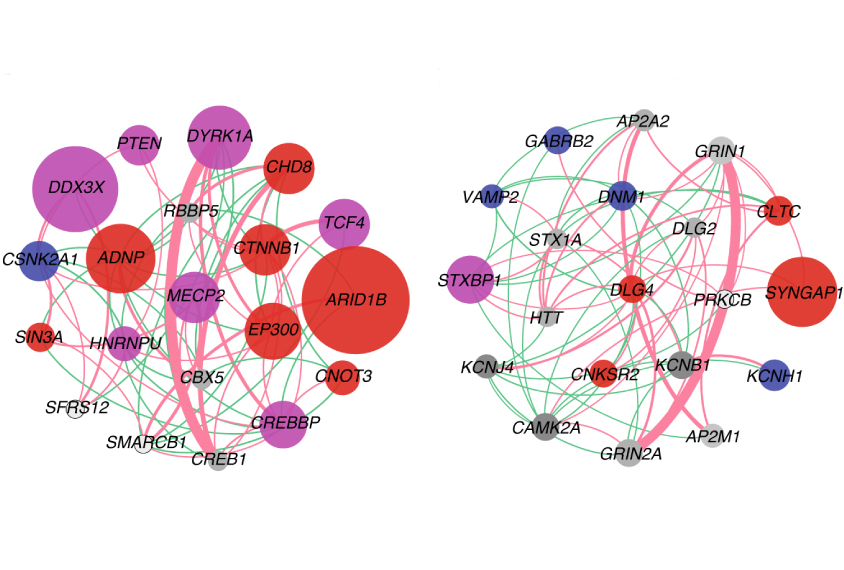 An analysis of spontaneous mutations in nearly 11,000 individuals with developmental delay or autism implicates 253 genes in one or both conditions; 49 of the genes are new candidates1.

The study pools data from individuals with either diagnosis — an approach that increases the numbers, and strengthens the validity of the associations.

“In terms of actually getting to [candidate] genes faster and being able to give this information back to parents, we should be combining these datasets more often,” says lead researcher Evan Eichler, professor of genome sciences at the University of Washington in Seattle.

An independent team presented a parallel analysis of data from an overlapping set of nearly 12,000 individuals with autism last May at the 2018 International Society for Autism Research annual meeting in Rotterdam, the Netherlands. That team made the case for 99 genes linked to autism.

The new study also looked at whether the genes identified lie within copy number variants (CNVs) — large duplications or deletions of DNA — with known links to brain conditions. The researchers identified 30 genes within these CNVs.

This overlap between the genes and CNVs is “reassuring,” says Santhosh Girirajan, associate professor of biochemistry and molecular biology at Pennsylvania State University, who was not involved in the study. But researchers should not rule out other genes located within those CNVs, he says.

The study includes sequences from 5,624 autistic individuals, 5,303 people with developmental delay and their parents. The data come from various published datasets, including more than 4,000 participants from the Deciphering Developmental Disorders study.

The researchers compared sequences from people who have a condition with those of their unaffected family members to spot mutations that arose spontaneously. They then used two statistical approaches to highlight those mutations that may contribute to the condition.

They flagged mutations in 253 genes altogether, including 124 strong candidates; 10 of these candidates had not previously been linked to either condition. The work appeared in January in Nature Genetics.

The two approaches mostly land on the same genes but aren’t entirely consistent. It might be instructive to focus on the shared genes, says Lucia Peixoto, assistant professor of biomedical sciences at Washington State University Spokane, who was not involved in the study.

More than three-quarters of the genes are mutated in both autism and developmental delay. Five are more closely tied to intellectual disability and developmental delay: These include ARID1B and ANKRD11. None stand out as unique to autism, although CHD8, DSCAM and WDFY3 all show a statistical trend in that direction.

Identifying autism-specific genes is complicated by the fact that the condition is often comorbid with many others, says Girirajan. There may sometimes be little difference between people diagnosed with developmental delay and those classified as having autism, he says.

The genes highlighted tend to regulate the expression of other genes, communication between neurons and cellular signaling. And many are expressed during early- to mid-fetal development, a critical time for autism risk, and in multiple types of neurons.

The analysis also highlights genes in specific CNVs, such as MAPK3 in the 16p11.2 region, that are strongly linked to autism.

The findings “nicely support” the idea that many CNVs are exerting their effects through individual genes, says Michael Talkowski, associate professor of neurology at Harvard University, who was not involved in the study.

The researchers aim to repeat this analysis as more sequencing data become available. Researchers from the Deciphering Developmental Disorders study presented preliminary data from an additional 26,765 families at the 2018 American Society of Human Genetics conference in October.