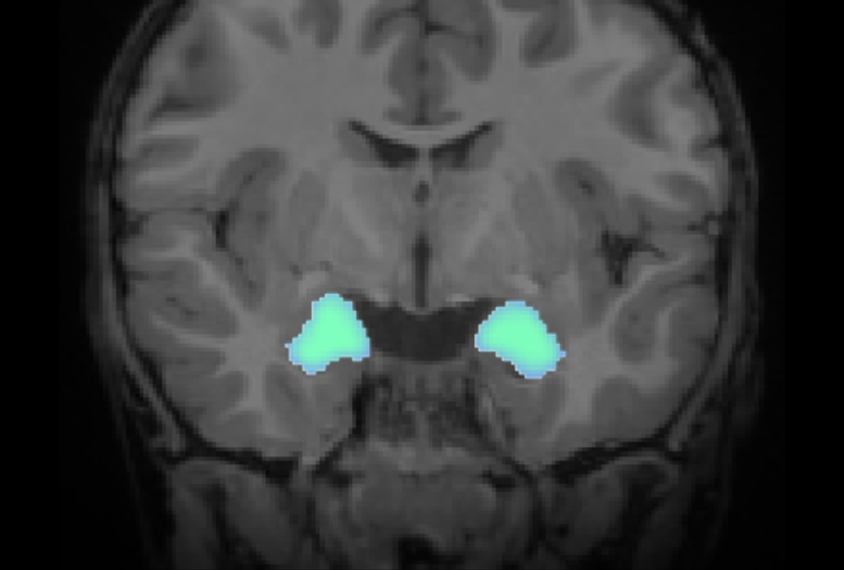 Fork in the road: The amygdalae of autistic children with an autism-specific form of anxiety and those with more traditional anxiety follow divergent developmental paths.
Derek Andrews

The amygdala — which is involved in fear and emotion processing and comprises a small region in each brain hemisphere — develops differently in autistic children with anxiety than in either those without anxiety or non-autistic children, according to a new study. But the exact differences in how the amygdala forms depend on the type of anxiety a child experiences.

Many people with autism have anxiety — more than two-thirds, by some estimates. Some researchers propose that an autism-specific form of anxiety can occur along with or instead of the types defined in the Diagnostic and Statistical Manual of Mental Disorders (DSM). Autism-specific anxiety may involve a fear of losing access to a special interest, for example, or worry over possible disruptions to a routine.

Autistic people with this form of anxiety tend to have unusually small amygdalae, researchers reported at the 2021 International Society for Autism Research annual meeting. For the new work, the same team excluded participants with obsessive-compulsive disorder from their original sample, revealing a new trend of large amygdalae in autistic children with so-called ‘DSM anxiety.’

“It’s really a mystery” why the amygdala would show opposite developmental trends in the two forms of anxiety, says lead investigator David Amaral, distinguished professor of psychiatry and behavioral sciences at the University of California, Davis MIND Institute. “What I would love to know is what really is happening at a neuronal level.”

Amaral and his colleagues hypothesize that an as-yet undiscovered variable drives both autism-specific anxiety and smaller amygdala size, potentially defining a subtype of autism.

“This is a beautiful study and very exciting,” says Kevin Pelphrey, professor of neurology at the University of Virginia in Charlottesville, who was not involved in the work. “This is good evidence for an autism-specific form of anxiety.”

Amaral and his colleagues scanned the brains of 71 autistic and 55 non-autistic children at up to four time points from about age 3 to 11. At the last time point, they also assessed the children’s anxiety levels using an autism-specific tool they developed: the Anxiety Disorders Interview Schedule-IV with the Autism Spectrum Addendum.

Among the children with autism, 43 — more than 60 percent — met clinical thresholds for anxiety: 28 for autism-specific anxiety, 32 for DSM anxiety and 16 for both. None of the non-autistic children had anxiety.

The findings were published in Biological Psychiatry on 2 February.

“It is somewhat surprising we see smaller amygdala volume,” says Derek Andrews, a postdoctoral researcher in Amaral’s lab. “This is kind of a starting point.”

Autism-specific anxiety could be associated with social stress, says Emma Duerden, assistant professor of applied psychology at Western University in Ontario, Canada, who was not involved in the work but has studied the amygdala and anxiety in autism. If that were the case, an over-activated stress system in the brain could have downstream effects on the amygdala and brain regions involved in emotion, learning and memory, she says.

The team’s approach could also help untangle conflicting past findings on anxiety and amygdala size in people with autism, she says.

“We really need to start better understanding these associations,” Duerden says. “The researchers’ methods, where they were able to very eloquently separate anxiety from autism-specific anxiety, is really a first step in the right direction.”

The findings suggest that different forms of anxiety could be diagnosed not just by a person’s particular fears — such as social anxiety or phobia — but also by patterns of brain development, Pelphrey says. Those data could help researchers develop more informed treatments for anxiety.

“To understand why these subgroups exist at the neural circuit level is an important step along [the] path to precision medicine for autism,” he wrote in an email to Spectrum.

The researchers say they plan to add more girls to the cohort to better understand sex differences, as well as autistic children with unusually large brains. They also hope to make predictions earlier in life about which children will go on to have anxiety, Amaral says.

“We’re doing all of this so we can actually reduce anxiety,” Amaral says. “This is like a first stage of a much longer-term project that has as its goal improving the quality life of people with autism.”