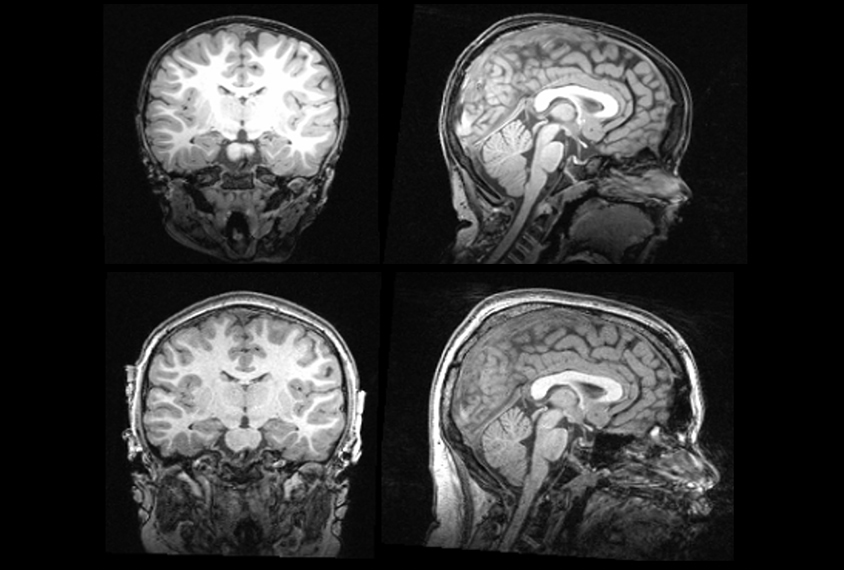 Brain gain: Repeated scans of autistic children from ages 3 to 11 reveal a possible subtype of the condition, marked by larger-than-usual brains.

Autistic boys with large brains in early childhood still have large brains in adolescence, according to a new study. Autistic girls, too, have brains that grow differently from those of their non-autistic peers. The findings challenge the long-standing idea that brain enlargement in autism is temporary.

Previous studies indicated that young children on the spectrum have larger brains than their non-autistic peers but older people with autism do not. To explain the difference, researchers speculated that a pruning process follows early brain overgrowth.

But the changes are a mirage, the researchers behind the new study say: Because having a large brain is associated with a low intelligence quotient (IQ) and severe autism traits, and because older children with such characteristics are often excluded from imaging studies, the prior results reflect only a lack of older participants with large brains.

“This whole idea of this early overgrowth followed by normalization is just an artifact of sampling bias,” says lead investigator Christine Wu Nordahl, associate professor of psychiatry and behavioral sciences at the University of California, Davis MIND Institute. “It was sort of like, ‘Wow, why didn’t we ever think about this before?’ But it’s pretty clear that that’s what’s happening.”

Autistic and non-autistic children also show different development patterns in their white matter — fibers that connect regions of the brain — in early childhood, a second study from Nordahl’s group shows. Some of the differences correlate with changes in the children’s autism traits over time.

Unlike previous work in this area, both studies tracked children over time and included participants of different genders and abilities — vital factors in autism research, the authors and other researchers say. They are the first longitudinal imaging studies to include autistic children with intellectual disability.

“They’re a very, very impressive set of studies,” says Kevin Pelphrey, professor of neurology at the University of Virginia in Charlottesville, who was not involved in the work. “I think they’re going to do a lot for the field.”

Both studies drew on data from children enrolled in either the Autism Phenome Project or the Girls with Autism Imaging of Neurodevelopment Study, who undergo annual magnetic resonance imaging (MRI) scans and autism diagnostic screenings starting at around age 3.

To examine brain growth, the researchers analyzed scans from 294 children with autism (95 of them girls) and 135 non-autistic children (61 of them girls) as the children grew from age 3 to 6. For the boys, they included an additional scan at around age 11; most of the girls have not yet completed this later scan.

When the children were 3 years old, 27 of those with autism, including 5 girls, had brains that were unusually large for their height — a trait the researchers classified as ‘disproportionate megalencephaly.’

Because there were so few girls with this trait, the team limited their analysis of it to the boys. At every time point, the large-brained boys had bigger brains than the rest of their autistic peers and the controls, who had similar brain sizes. All of the boys’ brains grew at the same rate throughout childhood.

Girls with and without autism had similar brain sizes. But, unlike the boys, the autistic girls’ brains grew more slowly over time than those of their non-autistic peers.

The findings point to a distinct form of autism that occurs more commonly in boys and is marked by a large brain and intellectual disability, says lead investigator David Amaral, professor of psychiatry and behavioral sciences at the MIND Institute.

“This is probably the clearest subtype of autism that we have come to through imaging,” he says.

The work was published 3 November in Biological Psychiatry.

Clarifying the findings around brain size is “important for the field,” says Signe Bray, scientific director of the Child and Adolescent Imaging Research Program at the University of Calgary in Alberta, Canada, who was not involved in the work. “Finding ways of meaningfully subgrouping people with autism is a big challenge.”

In the second study, the team evaluated white-matter structure in 125 of the children with autism (including 40 girls) and 69 controls (including 31 girls). They used a measure known as fractional anisotropy, which detects how water molecules move in brain tissue. The technique can distinguish the cell bodies of neurons, known as gray matter, from their projections and is used as a proxy for brain maturity, though its biological basis is unclear, Nordahl says.

White matter developed more slowly in the autistic children’s brains than in the controls’ brains in several areas previously linked to autism traits, including repetitive behaviors, executive function and motor skills. The findings were published in Biological Psychiatry in October.

Participants’ scores on a measure of autism severity also evolve over time, the team reported in May. At age 6, about 29 percent of the children with autism scored lower than they had at age 3 — suggesting the severity of their traits had waned — whereas 17 percent had moved in the opposite direction; the rest stayed stable.

Among other differences, children whose autism severity increased over time had slower white-matter development than other autistic children, most significantly in the sagittal stratum, which connects parts of the brain’s outer layer to deeper structures. The fiber bundle is linked to the ability to understand facial expressions.

“It really does start refining our view of what’s going on that might be associated with their behavioral changes,” Amaral says.

Despite the group differences, the study still showed a “remarkable” amount of variation in individual brain development, Bray says. More longitudinal studies will be needed to confirm the results. Future studies of brain size should also look more closely at regional brain growth, she says — and she lauds the inclusion of more autistic girls in both studies: “Kudos on the dataset.”

Future scans may also reveal white-matter differences between boys and girls, something the researchers did not find in the current study. Ultimately, identifying subgroups of autism will help scientists develop more targeted therapies and treatments, the researchers say.

“We’re at the beginning stages of that,” Nordahl says. “It’s still a dream.”