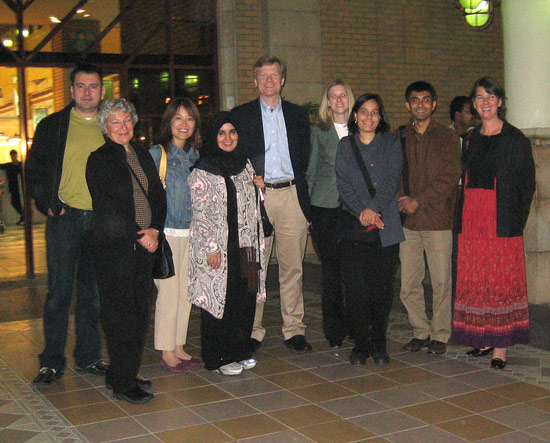 Family ties: Some geneticists, like Christopher Walsh (center, above), often collaborate with researchers in parts of the world where cousin marriages are common.

The study of any genetic disorder benefits from including the many diverse human populations in our world, and autism should be no different. Known genetic causes of autism account for only a fraction of cases of the disorder. Looking at genetics in unusual populations will be key to uncovering the remaining ‘silent’ mutations.

New mutations that arise in a single sperm or egg, called spontaneous or de novo mutations, affect only one of the two copies of a gene and occur at roughly equal rates among people everywhere. Spontaneous mutations seem to be an important cause of autism, to be sure, with copy number variants — duplications or deletions of DNA regions — accounting for 5 to 10 percent of cases, and spontaneous mutations that change single base pairs accounting for as much as 25 percent.

But even if we add these numbers to other known causes of autism, we are still left without a clear cause for more than half the cases of the disorder. To find the remaining genetic causes, we need to look everywhere.

Recessive genetic mutations affect children who inherit a disabled copy of the same gene from each parent. Because we all have two copies of most genes, parents are ‘silent’ carriers if their single functional copy of the gene is sufficient for normal health. We all carry about a dozen silent recessive mutations. Familiar recessive disorders include sickle cell anemia, Tay-Sachs disease and cystic fibrosis.

Some researchers feel that the contribution of recessive genetic mutations to autism will be negligible, and for them perhaps there is no reason to study special populations. But there are known recessive and heterogeneous causes of disease for every fully-studied organ system in the body, For all other known developmental disorders of the brain — such as intellectual disability, brain malformations, epilepsy and biochemical disorders — recessive diseases are frequent. Why would autism be unlike all other well-characterized diseases?

Recessive diseases classically vary widely in prevalence among populations, and these differences emphasize the importance of studying diverse populations in genetic research.

For example, look at cystic fibrosis, which is common among European Americans but rare among African Americans — or sickle cell anemia, which shows the exact opposite distribution. Tay-Sachs, on the other hand, is almost exclusively limited to families of Jewish descent.

Other ‘founder’ populations — such as French Canadians, Finns, Japanese and Amish — were socially and hence genetically isolated during their history. Each group shows its own uniquely recognizable diseases that are more prevalent in its populations, though each disease also affects many other groups of people.

Most Europeans and Americans are more of a genetic melting pot and get a little bit of everything, but — with the exception of cystic fibrosis — fewer individual diseases stand out. One of the most important genes associated with autism, CNTNAP2, was first identified as a cause of autism and epilepsy in the Pennsylvania Amish, and only later found to be an important cause in other American children as well.

Recessive conditions are also most common among children of parents who are related, for example, cousins. Because cousins share a certain number of genes, two cousins who have children are much more likely to be silent carriers of the same genetic mutation. As a result, their children are more likely to inherit two disabled copies of the same gene than is a child of unrelated parents.

The increase in genetic disease is actually modest in cousin marriages — about double the typical risk — and 97 to 98 percent of children born to cousins are healthy. Because of this, the consensus is that marriage between cousins is a part of a social and cultural fabric that need not be changed for medical reasons.

But cousin marriages provide a tremendous advantage for geneticists because they allow disease genes to be tracked through an entire family back to the common ancestor of the parents. This provides tremendous power in localizing and identifying a gene.

Geneticists tracking diseases often collaborate with researchers in — and usually travel to — parts of the world where cousin marriages are common. Perhaps surprisingly, more than 1 billion people live in countries where 50 percent or more of all marriages are between cousins, including the Arabic countries of the Middle East and Northern Africa, as well as Pakistan.

Families in these countries are just as eager as those in the Americas to understand the basis of genetic conditions, and to treat or avoid them. These worldwide collaborations are a classic case of the whole being greater than the sum of the parts. The key is to bring expensive expertise and training — whether in autism phenotyping, gene mapping or neuroscience — to countries whose historical patterns of marriage over generations make them ideally suited for identifying the genetic causes of disease.

Collaborations like these provide a rewarding opportunity not only to help families in far-away lands, but also to rapidly identify causes of autism and develop better tests and treatments for children everywhere.

Christopher Walsh is chief of genetics at Children’s Hospital Boston.