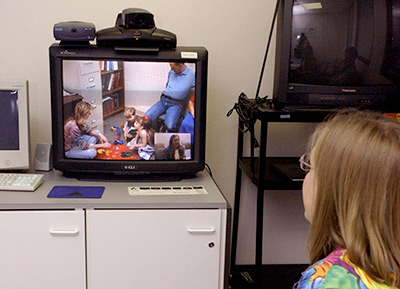 Many children with autism who live in rural areas are diagnosed at later ages than their peers in urban centers. Now, interactive video conferencing, or telemedicine, allows physicians to make virtual house calls, cutting down the time that families have to spend driving to seek medical attention.

The earlier autism is confirmed, the sooner parents can seek interventions for their children that improve language, behavior and cognitive skills.

A new study, published 19 July in Telemedicine and e-Health, reports that physicians using telemedicine can diagnose autism at a distance almost as well as they can in person.

In the study, one group of clinicians evaluated 11 children in person and another group evaluated 10 via video conference. The clinicians were told that that the children, aged 3 to 5, had either autism or developmental delay, but were not informed of any diagnoses.

Overall, all four clinicians agreed on the diagnoses for 20 of the 21 children. In fact, the only clinician who disagreed with the rest of the group’s diagnosis had assessed the child in person.

A detailed comparison of the clinicians’ assessments showed that they agreed with one another on all except one question.

On a social pointing task, the remote clinicians’ evaluations agreed with one another only 35 percent of the time compared with 81 percent for the in-person clinicians. This particular task may be especially difficult to score via a video monitor because it requires the clinician to follow eye contact and pointing between parents and their children, the researchers say.

Parents whose children were assessed remotely were just as happy as parents of children evaluated in person, according to a survey they submitted following the assessment.

Still, the study is small and the clinicians only used some parts of the diagnostic tests, as the others entail activities — such as a construction task with blocks — that are difficult to administer remotely.

If larger studies confirm the value of remote diagnosis for autism, families in rural areas could rely on the approach, as well as on therapy delivered the same way.

In a small case study published in Occupational Therapy in Health Care in 2011, three of four families reported that their boys who have autism showed better social behavior, attention and focus after four weeks of in-person visits followed by four video conferences with an occupational therapist.