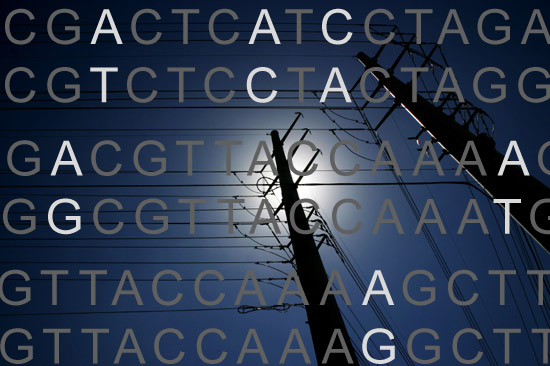 The Autism Genome Project (AGP), which led this study, reported in June in Nature that individuals with autism have a higher burden of copy number variants affecting genes. That study was based on a comprehensive survey of rare copy number variation in approximately 1,300 families.

In the new study, based on the same families, none of the million or so single nucleotide polymorphisms (SNPs) identified is associated with autism at a genome-wide level of significance — the commonly accepted cutoff for valid associations. The study does not replicate previously reported SNPs that do reach this cutoff — notably the intergenic variants between CDH9 and CDH10, and between SEMA5A and TAS2R1. Given that common variants tend to have weak effects that require very large sample sizes to be apparent, it’s likely that the AGP study is simply too small to reproduce the previous findings or to identify robust new associations.

The newly identified SNP that comes closest to clearing the bar is located in an intron of MACROD2. Others in KIAA0564, PLD5, POU6F2, ST8SIA2, and TAF1C also give strong signals. The MACROD2 SNP is of particular interest, because a 2008 study suggested that it regulates expression of PLD2, a nearby gene encoding a member of the phospholipase D family.

PLD2 has a role in glutamate receptor signaling, and is known to interact with the mTOR pathway, which has strong links to autism in the context of tuberous sclerosis. Note that PLD5, another member of this enzyme family, also shows a strong signal in the study.

The Psychiatric GWAS Consortium has been conducting large meta-analyses of several neuropsychiatric disorders, including bipolar disorder, major depression, attention deficit hyperactivity disorder and schizophrenia. These analyses, which will include SNP data from the Simons Simplex Collection, will have substantially more statistical power than the autism association studies conducted so far. The result should be a more definitive assessment of the role of common variation in autism.