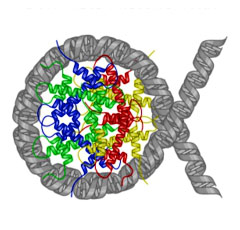 Nomenclature in biology is notoriously unsatisfying. Consider ‘bone morphogenetic proteins,’ so named because the first-discovered member of this family was found to promote bone growth. We now know, of course, that these proteins have many other roles in development that have nothing to do with bone.

A similar problem applies to our understanding of complex, multi-gene disorders. The first genes implicated in susceptibility to autism were those encoding proteins such as neuroligins and neurexins that function at synapses, the junctions between neurons. As a result, the assumption in some published overviews of autism tends to be that all of the problems relevant to the disorder can be found at synapses1.

There seems to be little question that at some level autism is indeed a disorder of synapses. That said, it’s difficult not to notice the striking number of chromatin-associated genes that have emerged as candidate risk factors from studies of autism and intellectual disability over the past few months.

Chromatin is a combination of DNA and proteins called histones, and these chromatin-associated factors, because they help pack DNA, can influence whether genes are turned on or off. In particular, genes encoding enzymes that modify histones — by adding acetyl groups, methyl groups or other chemical tags — seem to be a frequent target of mutation.

Histone modifications are critical in the control of gene expression, and particular chemical tags are associated with turning genes on or off, so these findings implicate dysregulated gene expression as a primary defect in autism.

This suggests another way to think about the molecular basis of autism: as the consequence of a cascade of events that may be triggered far upstream of the proteins that function directly at the synapse.

For example, in a paper published in May, James Gusella and his colleagues identified mutations in genes encoding a number of chromatin-associated factors in individuals with neurodevelopmental disorders, including autism. One of these genes, EHMT1, encodes a histone methyltransferase — an enzyme that adds methyl groups to histones — and may be a particularly interesting new lead into the role of histone biology in autism.

It was in 2006 that Tjitske Kleefstra first reported that deletion of EHMT1 can cause all the symptoms of chromosome 9q34.3 deletion syndrome (now known as Kleefstra syndrome)2. The disorder is characterized by intellectual disability, autism-like features and a range of other symptoms.

In July, Kleefstra and her colleagues went further and found that four additional chromatin-associated factors (MBD5, MLL3, SMARCB1, NR1I3) are mutated in some individuals with Kleefstra-like syndromes who do not have EHMT1 mutations3.

Through experiments carried out in Drosophila, they showed that all five proteins may function together as part of a common chromatin modification ‘module,’ and that mutations in any one of them may result in intellectual disability.

What they don’t mention is that three of these proteins — EHMT1, MBD5, MLL3 — have been implicated independently in autism as well as in intellectual disability.

Most interestingly, deleting EHMT1 in mice alters social behavior, suggesting that we may have in hand an autism model that mirrors both the genetics and behaviors of the disorder4.

The availability of this model presents a number of unique opportunities to the field.

First, it will allow investigators to ask whether any of the distinctive patterns of gene expression that have been detected in postmortem brain samples from individuals with autism can be attributed to alterations in histone methylation.

Second, it may allow the various drugs that are being developed to target histone-modifying enzymes5 to be tested in a mouse with robust and relevant autism-like behaviors.

Finally, and most generally, it will allow the expansion of autism research into a new area — one that has been overshadowed by the focus on the nuts and bolts of synaptic function but that may turn out to be equally, if not more, important.