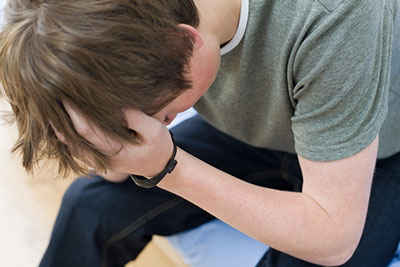 Anxiety runs in families with autism, hinting that the two conditions may share a common origin, suggests a twin study published in the November issue of the Journal of Child Psychology and Psychiatry.

Anxiety affects up to 84 percent of children with autism, but the typically developing twins of children who have autism and anxiety are also highly anxious, according to the new study.

The researchers looked at 128 families that have at least one child who has autism or displays some features of autism, known as the broad autism phenotype (BAP), and 80 control families enrolled in the Twins Early Development Study in the U.K.

In all, they assessed 142 children with autism, aged 10 to 15 years, 41 children with BAP, 73 unaffected twins and 160 controls, all based on parent reports of behavior. Overall, the controls are younger on average and have higher intelligence quotients than those with autism or BAP.

Compared with controls, the children who have autism or some features of the disorder experience more of all forms of anxiety, including social anxiety and episodes of panic, according to parent surveys. They score especially high on generalized and separation anxiety.

Even the unaffected twins have higher levels of social anxiety, generalized anxiety and panic than controls do, suggesting that their shared environment or genetics with the children who have autism puts them at risk for anxiety.

The study also confirms a link between high intelligence and social anxiety in autism. It’s likely that some of these children’s worries stem from their acute awareness of their difficulties.

In contrast, children with low intelligence quotients tend to have more separation anxiety, possibly because they are more dependent on their parents. Children with autism, particularly those who have repetitive behavior, are more likely than those with only autism features to have obsessive-compulsive disorder.

Given this complicated array of symptoms, it can be difficult to tease apart anxiety from autism’s core symptoms. A study published 26 October in the Journal of Autism and Developmental Disorders, found that few tests for anxiety ask enough questions to break it down by type.

Only four of ten tests the researchers evaluated merited their stamp of approval, distinguishing between several anxiety disorders or between anxiety and depression, and gauging the degree of anxiety.

All four tests, however, are best suited for children with autism who can reflect on and convey their state of mind. None of the tests can distinguish between certain coping mechanisms for anxiety, such as repetitive behaviors, and symptoms of autism.

A review of eight studies, published in the November issue of Pediatrics, offers some good news once anxiety is diagnosed, suggesting that cognitive behavioral therapy can alleviate anxiety in people with autism.

This kind of therapy teaches children how to regulate their emotions, ward off negative thoughts, and ease their anxiety on their own.