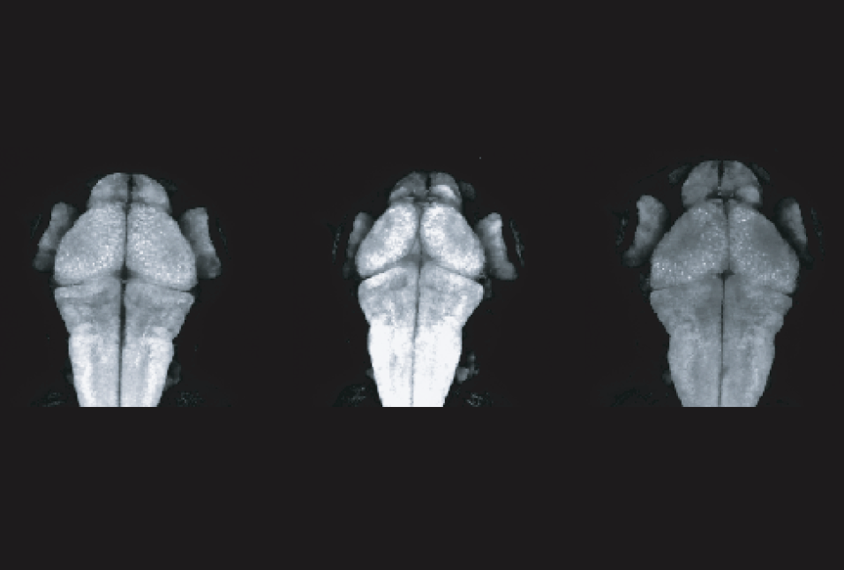 Super size: Overexpressing YTHDF2 in zebrafish leads to an increase in brain volume (right), but knocking it out decreases brain volume (middle), compared with controls (left).

Mutations in the YTHDF2 gene contribute to a form of autism marked by an unusually large brain, according to an unpublished study.

Researchers presented the findings in a talk last week at the 2022 American Society of Human Genetics conference in Los Angeles, California.

About 20 percent of autistic children have a disproportionately large brain, known as megalencephaly, which is associated with reduced IQ and language impairments.

“These are some of the most severe cases,” says study investigator Sierra Nishizaki, a postdoctoral researcher in Megan Dennis’ lab at the University of California, Davis MIND Institute, who presented the work.

To figure out the genes involved, Nishizaki analyzed the whole-genome sequences of 88 people — 11 of them with megalencephaly — from the Autism Phenome Project and public databases, looking for de novo variants associated with the phenotype. She focused on 10 genes and tested the impact of knocking out each of them in zebrafish. Two seemed to have significant effects on head size, including YTHDF2. 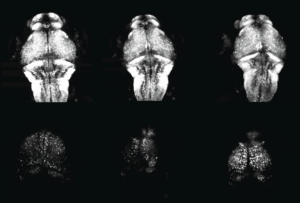 Brain imbalance: Overexpression and loss of YTHDF2 both lead to an increased proportion of inhibitory neurons (bottom row) compared with excitatory ones (top row).

When she removed YTHDF2 from the zebrafish, their heads were smaller than usual, and overexpressing it led the fish to have large heads. The team presented those findings earlier this year at the 2022 International Society for Autism Research.

Since then, Nishizaki has repeated the experiment in zebrafish that express a green fluorescent protein in their neurons, and she found that altering the gene affects not just the size of the head, but also brain volume. Both alterations led to a neuronal imbalance, with an increased proportion of inhibitory GABAergic neurons compared with excitatory glutamatergic neurons.

YTHDF2 is not previously known as an autism-related gene, and Nishizaki says she would like to further the research by investigating gene-expression data to see what other genes and pathways are involved in the gene’s actions.

“With these morphological changes, the pathways are changed, because autism is so genetic,” she says. Knowing more about the genes involved could also lead to potential genetic therapy targets and early detection markers, she says.