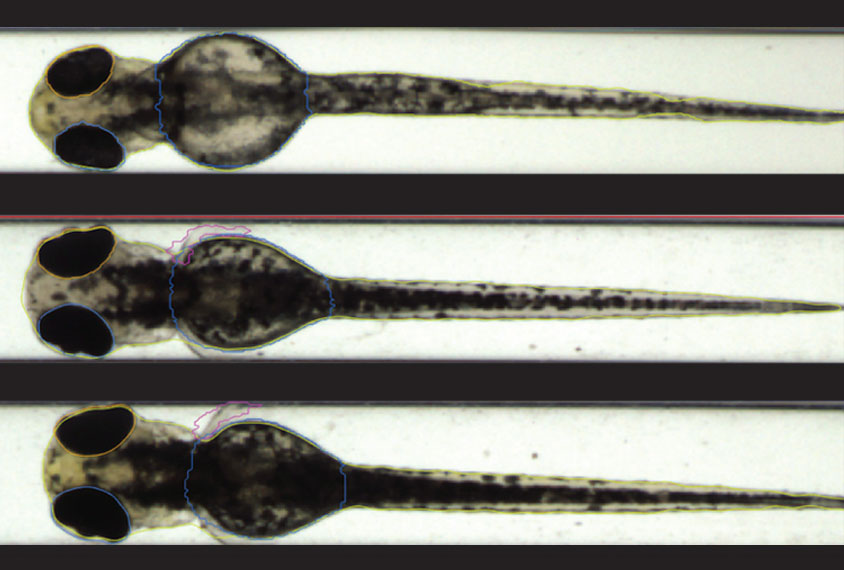 Heads up: Zebrafish that overexpress the gene YTHDF2 (bottom) have an unusually large head, whereas those missing the gene (top) have a small one, compared with controls (middle).

A gene not previously linked to autism may contribute to a form of the condition marked by an unusually big brain.

Sierra Nishizaki, a postdoctoral researcher in Megan Dennis’ lab at the University of California, Davis MIND Institute, presented the findings Thursday at the 2022 International Society for Autism Research annual meeting. (Links to abstracts may work only for registered conference attendees.)

About 15 percent of autistic boys, compared with 4 percent of non-autistic boys, have a disproportionately large brain for their height, a condition known as megalencephaly. Their brains stay large throughout childhood, the team previously showed. Such boys also have a low IQ and are minimally verbal, Nishizaki says, and may represent a subtype of autism with distinct genetic origins.

To parse those origins, the researchers identified 17 de novo variants — mutations not inherited from parents — in 100 autistic people with megalencephaly or its proxy, macrocephaly, a large head. One of the variants also affects head size in zebrafish, the team found.

“One of the big challenges of studying the genetics of autism in general is the immense heterogeneity,” Nishizaki says. “There are so many genes associated with different traits in autism. One of the ways we can get at identifying more of them is to subphenotype.”

The researchers identified the variants in 18 genes in 11 autistic people from the Autism Phenome Project, which includes data on megalencephaly, and 89 autistic people from the Simons Simplex Collection, which measures macrocephaly. (The Simons Simplex Collection and Spectrum are both funded by the Simons Foundation.) They then edited mutations in 10 of the genes into zebrafish, which have a transparent head, allowing for easy brain measurements.

Knocking out the gene YTHDF2 caused the fish to have an unusually small head. Overexpressing the gene — akin to a variant found in one of the autistic participants — increased head size.

“We’re very confident this is a head-size-associated gene, probably also associated with their autism,” Nishizaki says.

Variants in a second gene, RYR3, also reduced head size, but understanding its mechanisms will take “further digging,” Nishizaki says, adding that the team plans to test the rest of the genes in the zebrafish.