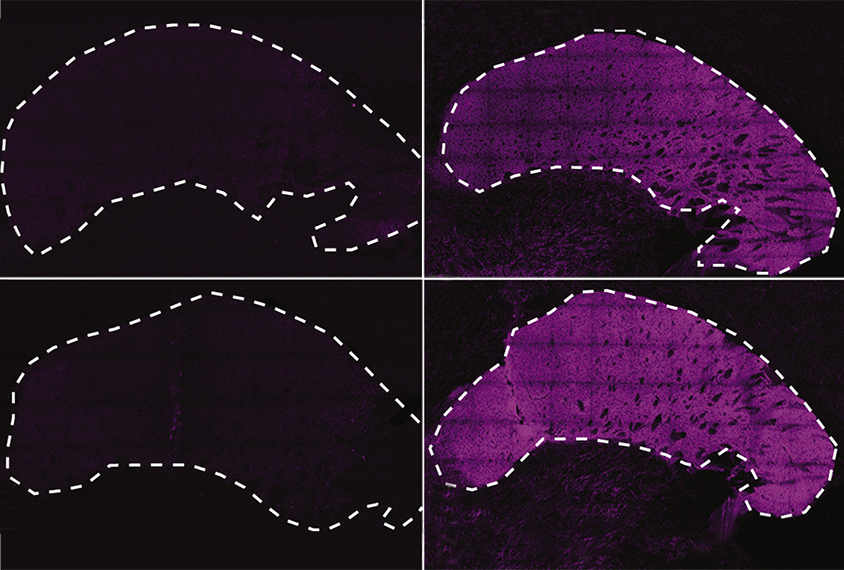 Circuit challenge: Chemically deactivating (left) the tail of the striatum had no detectable effect on wildtype mice (top) but normalized social behavior in SHANK3 mice (bottom).

Being in an unfamiliar environment prompts social avoidance and increases repetitive behaviors in mice with two mutated copies of the autism-linked gene SHANK3, according to a new study — but not if the environment contains familiar objects or if the animals are raised in an enriched environment. Central to this difference may be a brain area called the tail of the striatum.

The results, published in Neuron in February, jibe with other evidence that mutations in SHANK3 prime an animal’s susceptibility to environmental factors. Immune activation, like what occurs during an infection, blunts SHANK3 mice’s interest in other mice, according to research published in January. And stressful experiences, too, can induce social deficits in SHANK3 mice, a November study showed.

Some children also seem to prefer familiarity as they explore the world, says lead investigator Pico Caroni, senior group leader at the Friedrich Miescher Institute for Biomedical Research in Basel, Switzerland. “They have the tendency to drag with them a doll or a blanket, a piece of their familiar world as they discover the outside world. It’s sort of a comforting thing.”

If additional studies suggest that interventions — such as environmental enrichment — can benefit people with social difficulties or repetitive behaviors, “those should at least be considered,” Caroni says.

But autism-like behaviors in animals are not the same as autism in people, says Mu Yang, assistant professor of neurobiology at Columbia University, who was not involved in the work.

“We need to not forget that mouse models are tools to explore basic mechanisms with, rather than benchmarks that guide therapy development,” she says, however robust the results of this study may be.

Caroni and his team put the SHANK3 mice through a three-step test of social behavior: exposing them to another mouse in a small cage; giving them either an hour-long break or a 24-hour break before reintroducing them to their companion; and then, after another hour-long break, returning them to the enclosure to meet an unfamiliar mouse. During the same-day encounters, the SHANK3 animals resembled wildtype mice in terms of the time they spent sniffing the caged mouse, familiar or not: attentive at first, less interested upon return, and then interested once again when the newcomer was introduced.

After a day, though, they showed little interest in the unfamiliar mouse, unlike wildtype mice.

In a different test, SHANK3 mice encountered two identical objects in the enclosure. When they returned an hour later, a swapped-in object piqued their interest more than the original had, just as it did for wildtype mice. But both objects failed to attract the SHANK3 mice’s attention a day later.

Not only did the SHANK3 mice avoid new mice or objects during their third visit to the test enclosure, but they also showed significantly more repetitive movements than the wildtype mice did. And putting the SHANK3 mice in the enclosure before either test took place drastically reduced their engagement with either the other mouse or the objects.

This failure to engage reflects a memory issue, Caroni and his team say. But it could simply be apathy, Yang says. Choosing not to engage with another mouse could even be seen as a survival behavior, in which territorial male mice avoid possible conflict, she says.

Regardless of their motivations, the SHANK3 mice showed some marked differences from wildtype mice in their brain activity. When approaching novel objects, they had larger increases in dopamine neuron activation in the tail of the striatum, a brain region previously shown to be involved in avoidance behavior in mice, real-time dopamine imaging showed. During repeated approaches, dopamine neuron activity consistently went down over time in the wildtype mice, but it varied widely among the SHANK3 mice.

This led the team to suspect that the SHANK3 animals’ behavior resulted from the memory the mice formed when encountering an unfamiliar situation — a memory that they could not shake. Chemically deactivating dopamine neurons in the tail of the striatum a day before either behavioral test had no detectable effect on wildtype mice, but it relieved the SHANK3 mice’s avoidant behavior. The strong dopamine signal is likely responsible for the SHANK3 animals’ overreaction to new settings, Caroni says.

The SHANK3 animals’ behavior also normalized if they were familiarized with the objects for 10 days before the social test, or if they were raised in group housing with access to toys and exercise wheels. Enriched environments also led mice with another autism-linked gene mutation to develop more like wildtype mice, a January study showed.

Even when the SHANK3 mice in an enriched environment had their tail-of-the-striatum dopamine neurons silenced, they acted like wildtype mice in the behavioral tests, suggesting that the environmental enrichment intervention bypasses the tail of the striatum.

Exploring this brain circuit further could help scientists probe what makes it difficult for autistic people to deal with unexpected situations, says Audrey Brumback, assistant professor of neurology at the University of Texas at Austin, who was not involved in the work.

Caroni and his team are following up on this study with other mouse models of autism, he says, to explore whether other gene mutations lead to similar brain circuit changes.