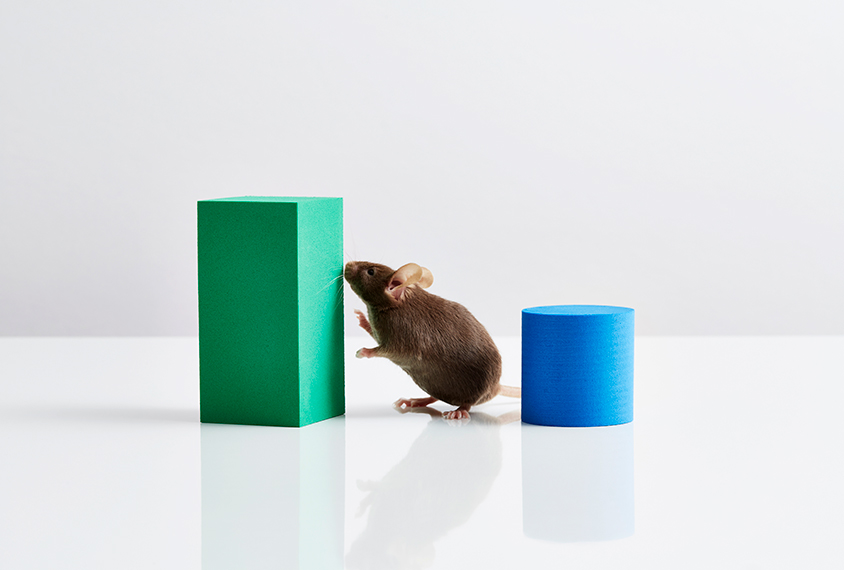 Angelman syndrome model mice have fewer-than-expected behavioral and motor problems if they grow up in a stimulating enclosure, filled with toys and other enrichments, according to a new study.

The mice are missing a copy of UBE3A — the gene mutated or deleted in people with Angelman syndrome, an autism-linked condition characterized by developmental delay and motor coordination problems. The rodents usually have motor issues, mild cognitive impairments and difficulty with typical activities such as building nests and burying objects.

Past attempts to improve behaviors in UBE3A mice have worked for only a narrow set of traits, says lead investigator Alexander Kloth, assistant professor of biology at Augustana University in Sioux Falls, South Dakota. But male UBE3A mice in the new work benefited more broadly. The female mice, by contrast, did not show the same gains.

“We were surprised that so many phenotypes that typically show up in Angelman syndrome model mice were rescued by environmental enrichment,” Kloth says. The lack of responsiveness in female mice came as a surprise, too, he adds.

These results highlight the importance of stratifying model mice by sex for preclinical research, says Lawrence Reiter, professor of neurology at the University of Tennessee Health Science Center in Memphis, who was not involved in the study.

Kloth and his team randomly assigned the model mice and controls to either standard or enriched housing at 21 days of age, when the mice were weaned. The standard housing contained little more than the basics: shaved wood bedding, a cotton nest and containers for food and water. The larger enriched housing, by contrast, contained climbing structures and exercise wheels, bedding of different textures and a variety of toys and treats scattered throughout.

The benefits of this early start are consistent with results of interventions seen in people, Reiter says: “Enrichments starting earlier have better outcomes.”

After six weeks, the mice began a series of behavioral tests. Male UBE3A mice raised in the enriched accommodations performed better on nearly every test than UBE3A males raised in standard cages, the researchers found. These mice even performed as well as wildtype mice did on some of the tasks, including a test that measures a mouse’s motivation to escape deep water. Female UBE3A mice raised in an enriched environment did not show any significant improvement on the same task.

Angelman model mice tend to be overweight, but both males and females raised in enriched housing showed no difference from wildtype mice in terms of body weight. The findings were published in December in Brain and Behavior.

The findings suggest that some of the Angelman-like traits seen in UBE3A mice, which have been extensively studied and described by other researchers, can be sensitive to environmental changes, says Ype Elgersma, professor of molecular neuroscience at Erasmus University in Rotterdam, the Netherlands, who was not involved in the work. “One should take this into consideration when designing the experiments,” he says.

And the burning question is why the mice improved, Reiter says.

It’s possible that motor issues in Angelman mice have more to do with how their brains process feedback from the environment than with motor function per se, so it would be illuminating to see whether a domain such as gait, which involves this more complex feedback, improves with environmental enrichment, he says.

Differences in the levels of brain-derived neurotrophic factor, which has been shown to be affected by environmental conditions, and stress-related chemical signals in the brain could account for the sex difference observed in this study, Kloth says. “Further understanding these molecules in the context of Angelman syndrome model mice will be key to future work.”

To this end, he and his students plan to examine how neuron structure and function are affected by differences in rearing environments.