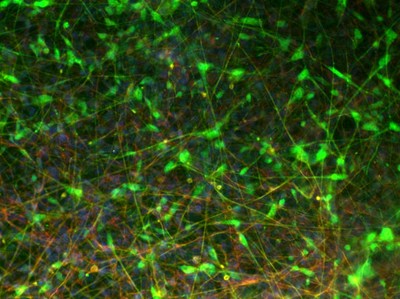 Distinct path: About 6,000 genes show changes in their levels of expression as stem cells differentiate into neurons.

Distinct path: About 6,000 genes show changes in their levels of expression as stem cells differentiate into neurons.

Stem cells reprogrammed to become neurons can provide a picture of gene expression in neurons that is traditionally available only from brain tissue, according to a study published 7 September in PLoS One1.

Comparing gene expression in stem cells and neurons shows that some autism candidate genes are needed for stem cells to differentiate into neurons, the researchers say.

Gene expression studies of the brain generally use postmortem brain tissue. This resource is rare, however. Other studies analyze gene expression patterns in blood cells, but cannot detect gene expression that is specific to neurons.

In the past few years, researchers have developed the ability to take skin cells from individuals with autism or related disorders and coax them to become neurons.

In the new study, researchers used a technique called RNAseq to compare the messenger RNAs — DNA transcripts that code for proteins or regulate other genes — expressed in stem cells and the neurons generated from them.

As stem cells develop into neurons, the expression of about 4,000 genes is turned down and that of about 2,000 is turned up, the study found. Another 3,000 or so RNAs that do not code for protein, but could regulate the expression of other genes, are also differentially expressed in the two cell types.

Several of these RNAs have been implicated in autism or other neurological disorders. For example, regions within the autism-associated gene neurexin 1 are spliced together differently in the RNAs of stem cells compared with those of neurons. Several other genes implicated in autism, such as NRXN3, NLGN1 and NCAM1, are also differentially expressed.

The study also found differences in the levels of RNAs that include autism-linked single nucleotide polymorphisms, or SNPs, which are changes in single DNA nucleotides. Because many SNPs are common in the general population, their association with disease is not always clear.

Taken together, the results suggest that these genes and SNPs are involved in the generation of new neurons.

The technique can also help researchers pinpoint the genes responsible for disease within copy number variations, duplications or deletions of chromosomal regions that often span numerous genes. For example, five RNAs transcribed from 22q11.2, the chromosomal region associated with autism and schizophrenia, are expressed at different levels in stem cells and neurons.