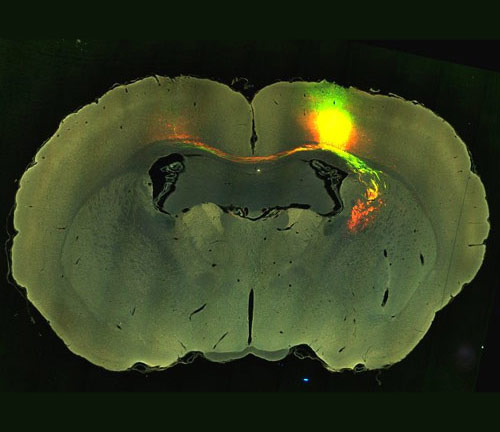 Light transfer: Fluorescent tracers injected into regions of the mouse brain show the flow of information across neuronal circuits.

Researchers have released the first set of data from the Mouse Brain Architecture Project, which uses light microscopy to trace neuronal circuits in the mouse brain.

The human brain contains billions of neurons and trillions of connections between those cells. The Human Connectome Project aims to map the paths by which information travels along these neurons by assembling brain scans from 1,200 healthy adults taken using various imaging techniques. Other ventures rely on detailed electron micrograph images of only a few synapses, or neuronal junctions, to trace their connections — a process so painstaking that the researchers have turned to crowdsourcing to map neuronal wiring in the retina.

Researchers at Cold Spring Harbor Laboratory in New York are instead using light microscopy, which is more detailed than brain imaging and at a scale large enough to allow the mapping of an entire brain.

In their Mouse Brain Architecture Project, the researchers first create a grid that divides the mouse brain into 250 individual regions. Radioactive or fluorescent tracers injected into each one of the regions travel either from the signal-receiving ends of neurons through neuronal junctions, or in the opposite direction.

After the tracer has traveled through a neuronal circuit for a certain amount of time — between 3 and 21 days, depending on the molecule — an automated system slices the brain into 500 sections and photographs each one.

All 500 images from a single brain with a single tracer injection are then assembled into three-dimensional reconstructions that allow viewers to travel though the brain from one side to another. Each image is about 1 billion pixels, allowing viewers to zoom into the regions, simulating what the researchers call a “virtual microscope.”

The researchers plan to repeat this process for each grid section with four different tracers and in multiple mouse brains of the same age and gender. Their aim is to identify neuronal circuits that are consistent among mice, suggesting that these are fixed pathways by which information flows in and out of brain regions. So far, data are available for 100 injections of four tracers into a number of brain regions.