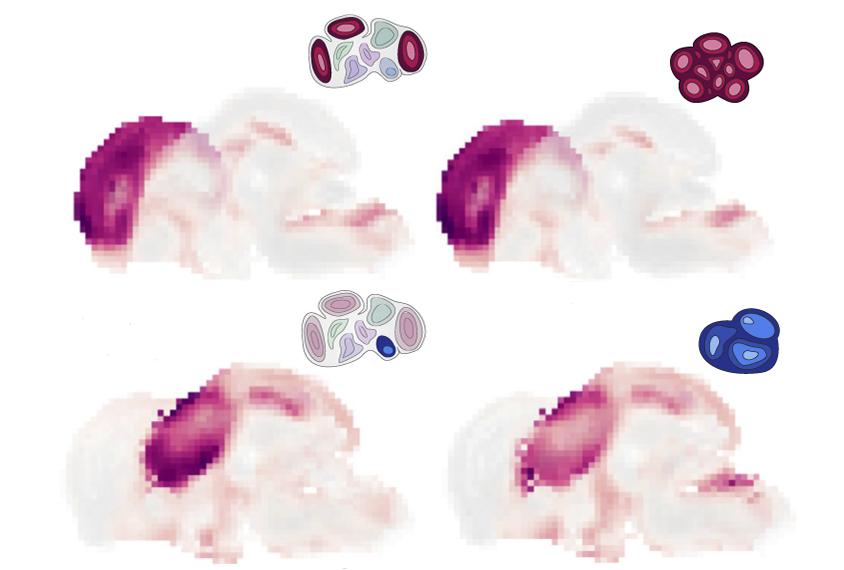 Map quest: Two types of neurons (cortical, top; thalamic, bottom) from different organoid batches are mapped onto a reference view of the developing mouse brain. Dark colors indicate a high degree of similarity between the organoid-derived neurons and the reference map.

A new tool helps researchers explore the types of cells that make up brain organoids — clusters of cells that can mimic the basic structure, function and development of different parts of the brain.

The software, detailed in Cell Stem Cell, maps information about when and where genes are expressed in brain organoids onto a reference atlas of the developing mouse brain. Scientists can use the resulting overlay to develop organoids that better recapitulate the developing brain, the team says, or to uncover the effects of gene mutations and other experimental perturbations.

Brain organoids derived from the cells of people with conditions such as autism have proved useful in capturing neuronal abnormalities. But the findings are muddied by methodological differences in how researchers develop these lab-grown blobs. Advanced techniques to profile gene expression in single cells have made it easier to identify the cell types in any given organoid. But it’s remained difficult to map those cell types onto different brain regions.

“You have to do a bit of detective work to find out what type of cells and what brain region you have been growing,” says lead investigator Barbara Treutlein, professor of quantitative developmental biology at ETH Zurich.

Treutlein and her colleagues developed a computational tool, called VoxHunt, that maps single-cell gene expression data from brain organoids obtained via different protocols onto the Allen Mouse Brain Atlas. The atlas, the most detailed of its kind, provides a high-resolution, three-dimensional map of the developing mouse brain, including the expression patterns of more than 2,000 genes.

The researchers tested VoxHunt using data from experiments that charted gene expression in individual cells from different types of brain organoids. Cells identified as cortical neurons, based on their gene-expression patterns, map onto a developing region that gives rise to the brain’s outer layer, the team found. Cells identified as thalamic neurons map to the diencephalon, a region that develops into the thalamus and other brain structures.

Using VoxHunt, the team identified a previously unknown cluster of cells in 1-month-old brain organoids. These cells map to structures including the roof plate, which produces molecules that are important for early brain development.

VoxHunt also maps data from experiments that chart uncoiled regions of chromatin — the complex of DNA and proteins that helps to regulate gene expression — in brain organoids. These uncoiled regions are accessible to proteins that turn genes on and off. Knowing where cells with accessible regions of chromatin map onto the reference atlas can be particularly useful for autism researchers, Treutlein says, as genes that influence chromatin structure are often mutated in people with neurodevelopmental conditions.