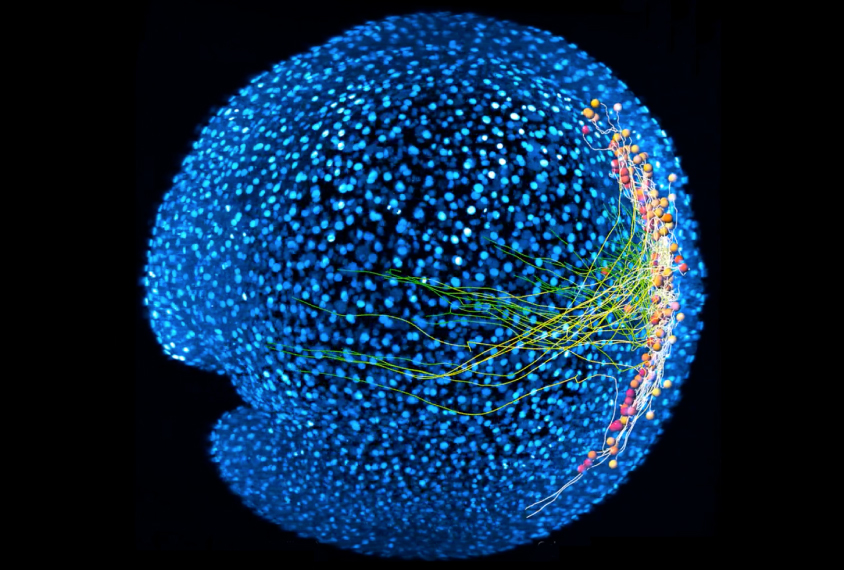 Spinal zap: A new method tracks individual neurons as they form the zebrafish spinal motor circuit and begin to fire together.

The method, applied in zebrafish, represents the first time scientists have visualized this entire process and may provide clues to how the brain develops in people with autism.

Neurons born in the fetal brain mature and differentiate into specialized cells before migrating to their final destinations. Once they reach those destinations, they make connections with other neurons and form networks that control the organism’s functioning.

Until now, researchers have had to choose: Visualize these processes in the whole brain at low resolution, or look at single cells in detail at one location and forfeit the big picture.

The new method lets them follow an individual neuron’s journey from its birth to the first time it fires in a circuit.

The researchers genetically engineered zebrafish in which every cell glows. They added chemical tags to neuronal precursor cells in the zebrafish embryos and used a technique called light-sheet microscopy to track these cells. (Light-sheet microscopy is faster than traditional microscopy and can scan large areas at the resolution of individual neurons.)

When the precursor cells began to differentiate into different types of neurons, the researchers switched to a technique called high-speed functional imaging to record neuronal activity. They used an algorithm to analyze the neurons’ activity as they formed connections and began to fire in coordination. The researchers mapped the neurons’ journeys as they assembled into the zebrafish spinal cord motor circuit. The team reported their method 3 October in Cell.

Scientists had previously assumed that interneurons — a type of neuron that inhibits neuron signaling — initiate circuit formation. The new method revealed that motor neurons instead seem to lead this process.

The researchers have shared their single-neuron data, computational methods and an open-source blueprint of their microscope online.