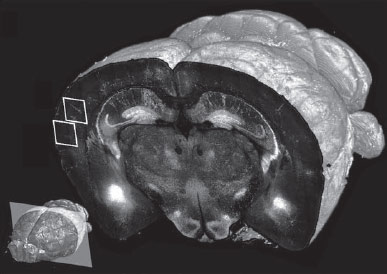 Big picture:  A new instrument automatically slices mouse brains into sections, and then photographs and reassembles them into a whole-brain image.

Big picture:  A new instrument automatically slices mouse brains into sections, and then photographs and reassembles them into a whole-brain image.

An automated instrument can reconstruct fluorescently labeled mouse brains in less than a day, researchers reported 15 January in Nature Methods1.

These whole-brain reconstructions can help researchers to piece together the complex brain circuits that underlie neurological disorders such as autism.

Manual reconstructions of the brain can take as long as seven days. By contrast, the new technique allows researchers to photograph two brains a day. Most importantly, the results are reproducible across different users and laboratories, says lead investigator Pavel Osten, associate professor at Cold Spring Harbor Laboratory in New York.

Researchers first stabilize protein interactions in the brain with formaldehyde and then immobilize the brain in a gelatin-like substance called agar. They then use the instrument to cut the brain into 280 slices, photographing the remaining tissue after each slice is removed. This generates a series of images that can be reconstructed into a representation of the entire brain.

The process is automated, minimizing misalignments that can occur with manual sectioning and speeding up the experiment.

The instrument uses a microscopy technique called two-photon tomography to look at brains that express fluorescent markers, which can be used to label subtypes of neurons or specific brain regions.

The researchers are looking at the brains of five different mouse models of autism: mice with a single nucleotide mutation in NLGN3 called R451C, mice lacking NLGN4 or CNTNAP2, and those with either a deletion or duplication of one copy of the 16p11.2 chromosomal region. Each of these mutations is highly associated with autism, but may affect different aspects of neuronal function.

Although the entire project is expected to take almost two years, Osten already sees similarities among the NLGN3, NLGN4 and CNTNAP2 mutant mouse brains that he has analyzed using the new tool. “This suggests that there are some circuits that are affected in all three models, even though the genes affected are not the same,” he says.