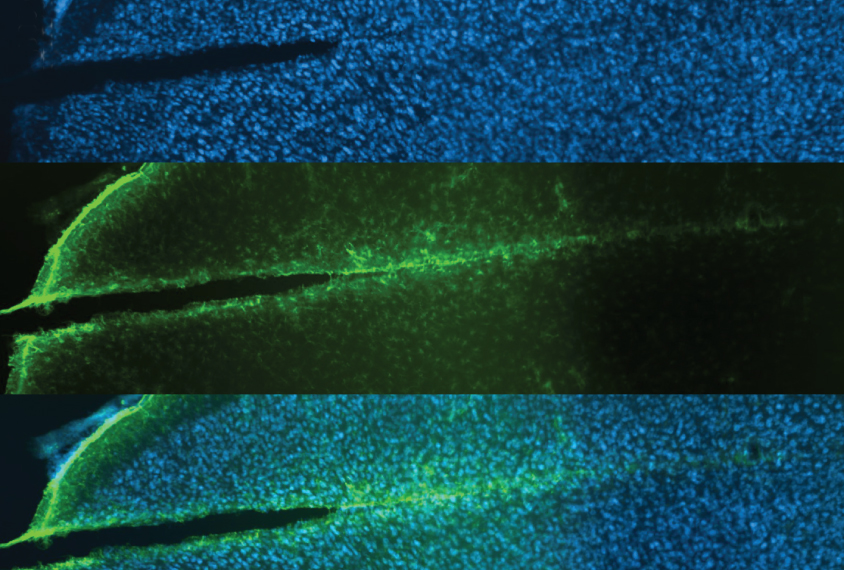 Listening in: Stained sections of rat brain tissue bear the outline of a polymer probe 160 days after its insertion.

A flexible electrode array can record the firing of hundreds of rat neurons for months on end1. The device monitors how brain regions interact, and it could be used to study how the patterns of interaction are disrupted in autism.

Most arrays are optimized to record signals either from a wide swath of neurons or over extended periods of time.

For instance, arrays made of densely packed silicon spikes can monitor more than 700 neurons at once2. But the stiff probes damage delicate brain tissue, preventing neurons from functioning normally within about two weeks. Arrays made of thin metal probes are less harmful and can record for months, but they track only about 60 neurons at a time3.

The new device, which is made from soft polymers, matches the spatial coverage of silicon devices and is pliable enough to adjust as the brain in a live animal moves, limiting tissue damage. Previous polymer-based arrays have recorded signals for at least four months, but only in about 10 neurons4.

In the new work, researchers built a 1,024-electrode device that records signals from hundreds to thousands of neurons in freely moving rats.

The researchers implanted the arrays into two outer regions of the rat brain and two interior ones.

In one test, they recorded neuronal activity for 45 to 120 minutes per day. The device collected stable recordings of 375 distinct neurons, firing on a millisecond timescale, for 160 days. They extended one test to 283 days and saw only a minor dip in recording quality.

In another test, they tracked neuronal impulses around the clock. They recorded 2,322 neurons for at least 24 hours, and 247 of these for more than a week, even while the rats performed navigation tasks that involved running about 250 meters several times each day. The work appeared 2 January in Neuron.

Scientists could use the device to shed light on the neural underpinnings of learning, memory and other brain processes that occur over long periods.

The researchers are working to translate and refine the technology for use in other species, including mice and primates. The method could be used to study the brain in various animal models of autism.