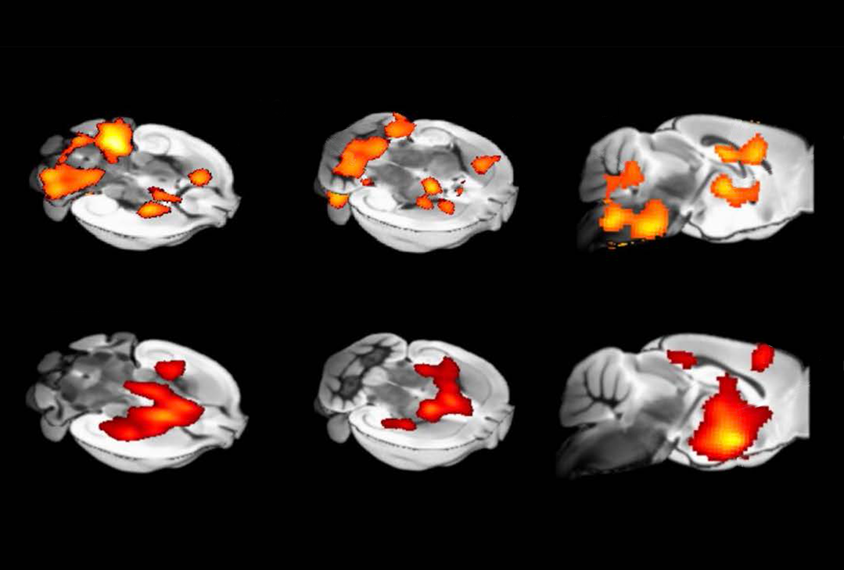 A custom-built machine can scan the brains of awake mice1. The technique may improve studies of brain activity in rodents and improve researchers’ understanding of conditions such as autism.

Functional magnetic resonance imaging (fMRI) of mice typically requires the animals to be lightly anesthetized, limiting the types of research questions scientists can ask. The scans can measure brain activity while mice are at rest but not while they are conscious. Anesthesia may also change brain activity and patterns of blood flow, skewing the images.

Anesthesia is usually needed to ensure mice remain still during scanning. In the new study, researchers instead used a bar attached to a frame to immobilize the mice.

This system allows for better comparisons of fMRI scans from mice and people, the researchers say. It may also enable researchers to draw connections between brain activity and behavior in conscious animals.

The researchers compared fMRI scans of typical mice with those of mice bred with dup15q, a duplication of a segment of chromosome 15, which is linked to autism.

The mutant mice have fewer neuronal connections in many parts of their brain, including the hindbrain and motor cortex, than the typical mice do, the team found. The work was published 5 February in Science Advances.

The researchers then evaluated the animals’ responses to the scents of unfamiliar mice, as a proxy for social interest. They fitted a nasal mask onto each mouse while it was in the scanner and piped in odors of stranger mice.

Brain regions such as the hippocampus and hypothalamus are much less active in the presence of these unusual odors in the mutant mice than in the controls.

The researchers also tested the effects of a drug, D-cycloserine, that may improve social functioning in autistic people2. Mutant mice that receive the drug engage longer with other mice than those that receive a saline placebo. The drug partially restores functional connections in parts of the mutant mice’s frontal cortex and normalizes their response to unfamiliar odors.