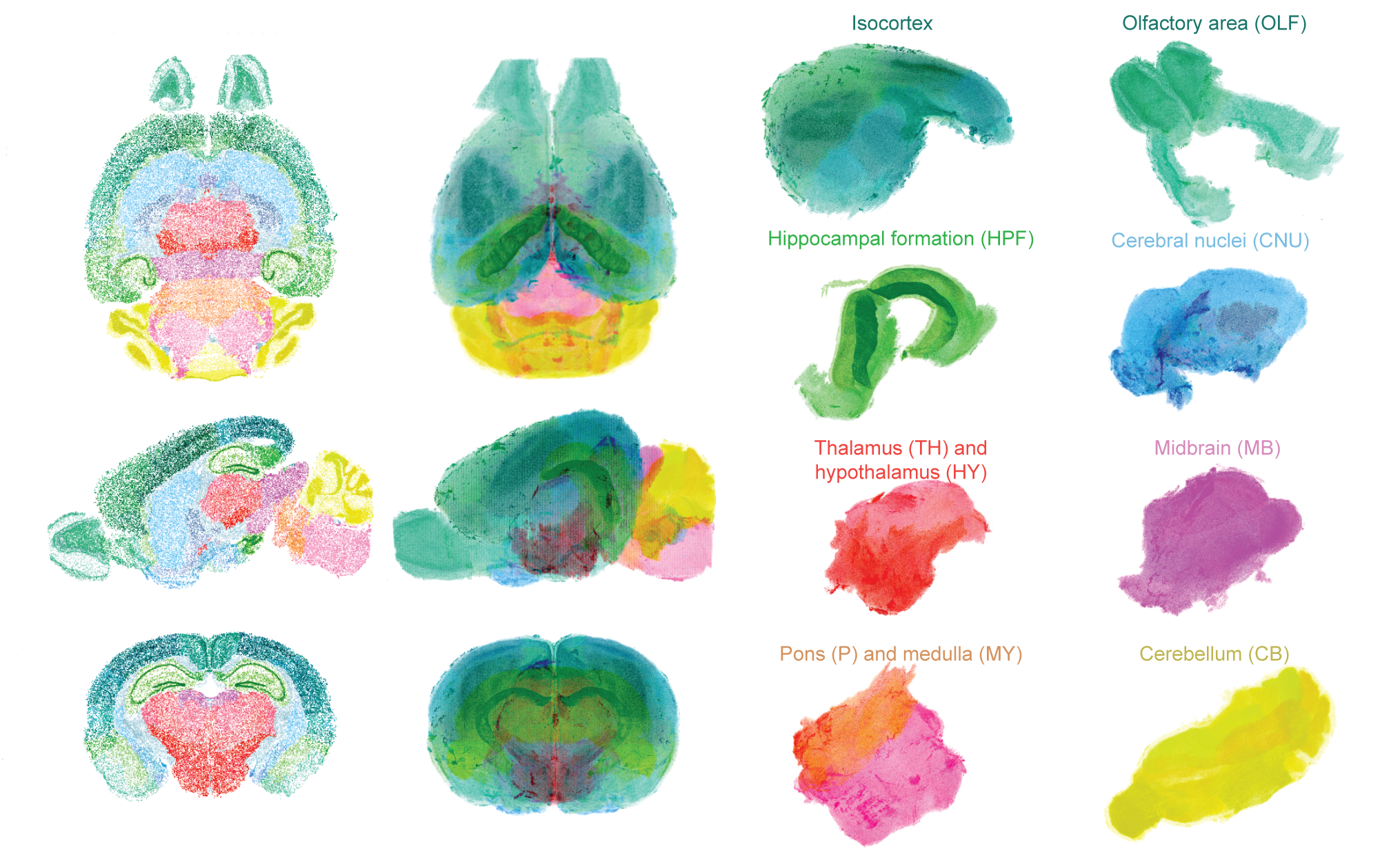 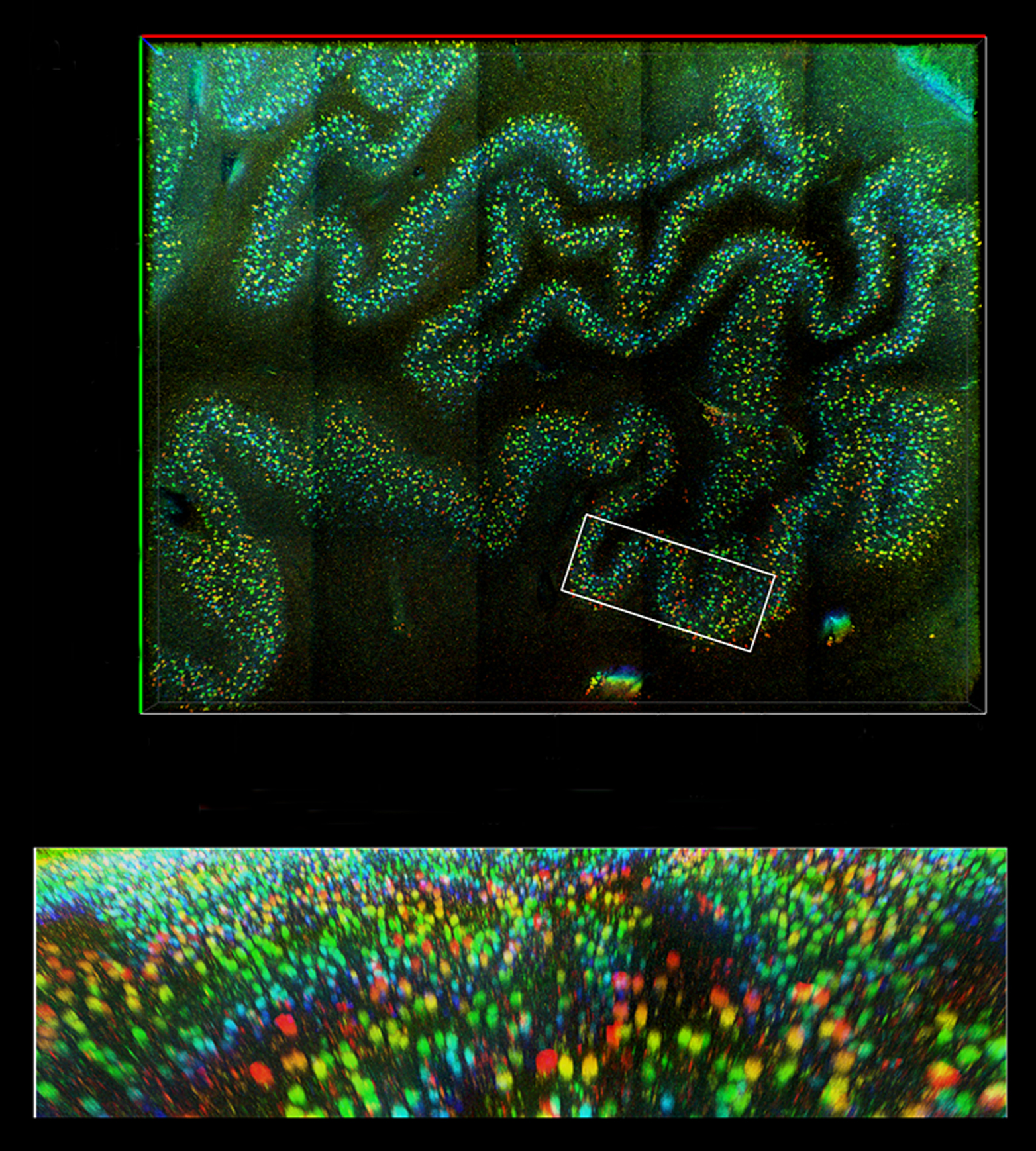 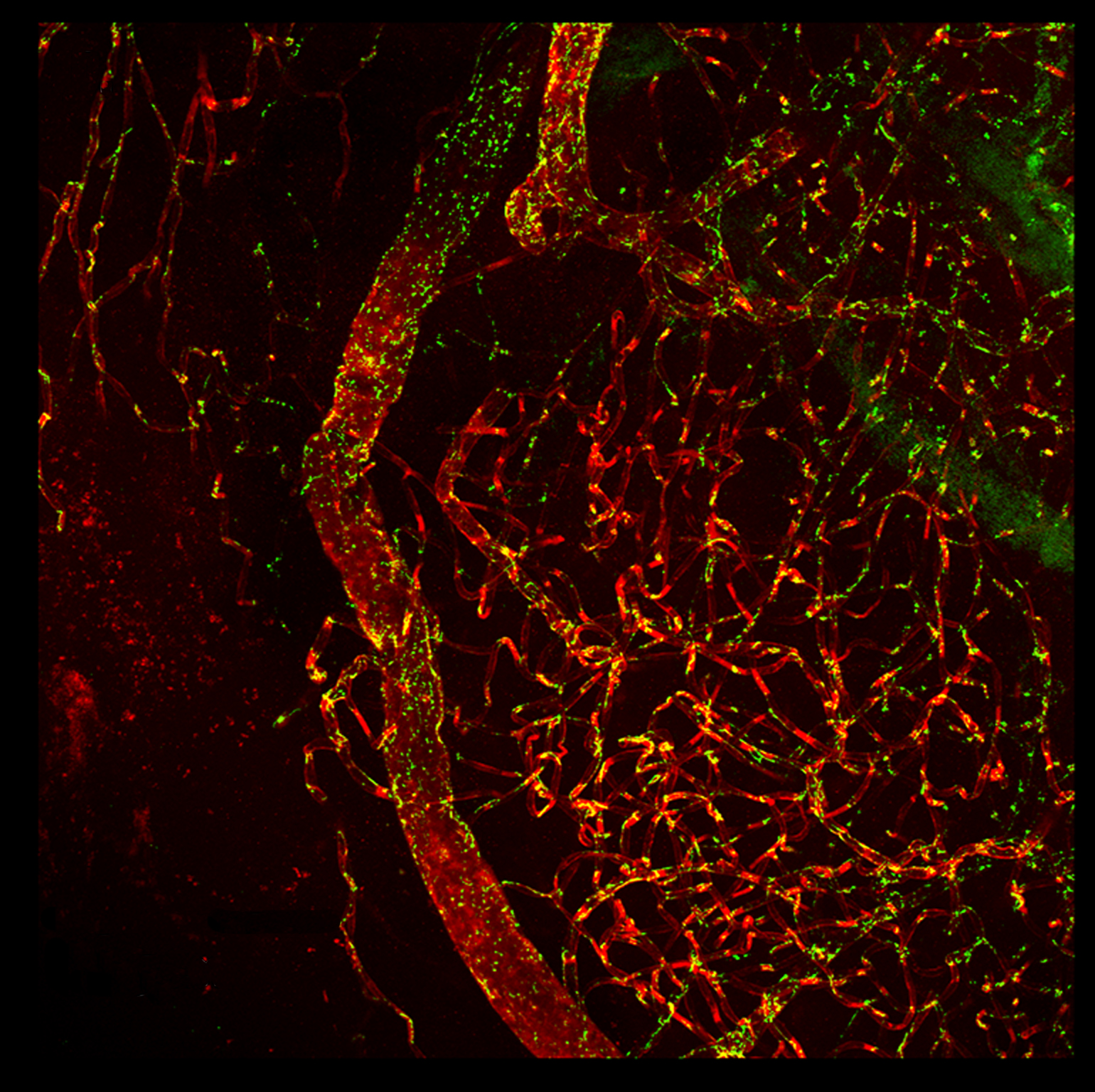 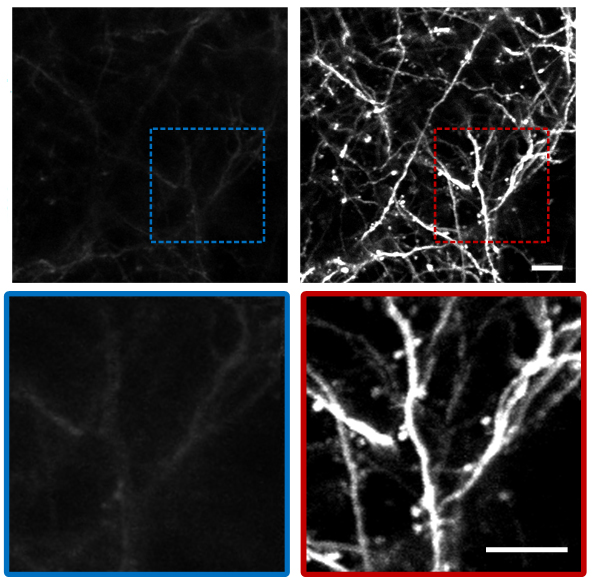 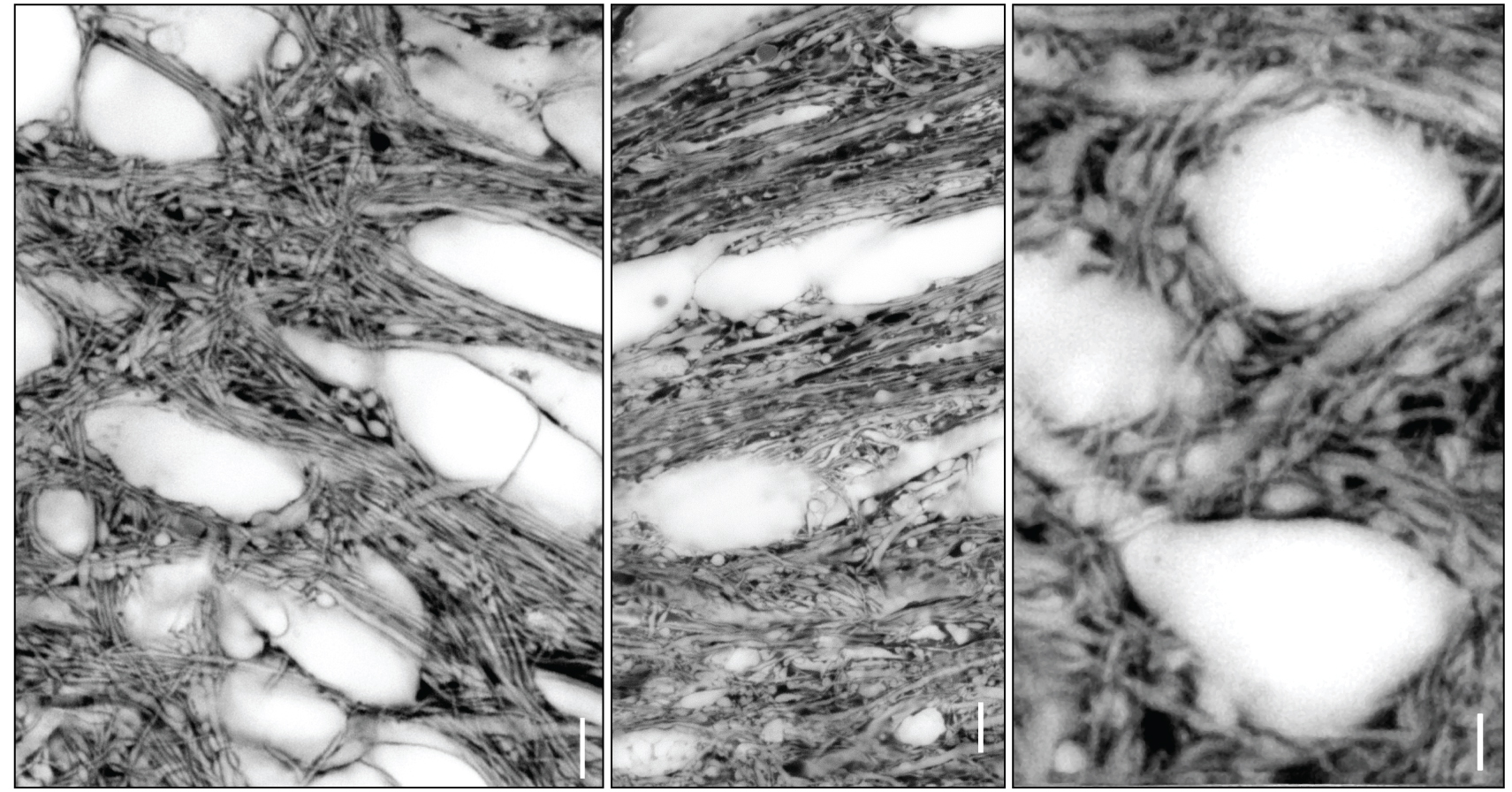 Cleared curves: A transparent slice of human brain tissue reveals folds of the medulla oblongata, part of the brainstem that controls breathing and heart rate.

Vascular view: Blood vessels thread through a slice of human cortex, the brain’s folded outer shell, that has been chemically treated to reveal deep structures.

Fluid photo: Images of the fluid between cells expose the movement of a specialized immune cell (red arrow) to address an injury (red cross).

Flipped picture: Dyeing the fluid between cells and then reversing the exposure brings out neurons and their connections.

Four new imaging techniques published over the past few months enable researchers to easily visualize cells and other features in tissue slices and living brains.

One team of researchers built a 3-D brain atlas at single-cell resolution using a chemical cocktail that expands mouse brain tissue and renders it transparent.

The team evaluated more than 1,500 chemicals before choosing two — imidazole and antipyrine — that together expand brain tissue and make it transparent without distorting the samples. They applied this chemical mix to whole mouse brains. The mice ranged in age from 1 week to 6 months.

The researchers then labeled the nucleus of every cell with a dye that makes DNA glow red in the brains of mice. They created an image of each brain using a fluorescent microscope.

An algorithm identified and counted every cell in the images to create a 3-D digital brain. The program mapped cells to coordinates in the Allen Institute for Brain Science’s Mouse Brain Atlas. The result is an ensemble of points representing cells in the mouse brain.

Existing brain atlases typically contain a lot of data because of their detailed images, making them difficult to edit. Constructing a digital brain cell by cell decreased its size to less than 3 gigabytes. The atlas also uses open-source code, making it easy to update with information about cell types, gene expression and neuronal connections.

The researchers unveiled the so-called CUBIC-Atlas 5 March in Nature Neuroscience1.

A different chemical cocktail also renders human brain tissue transparent. The mixture has three principal ingredients: one chemical that partly unravels proteins and two others that minimize scattering as light moves through structures of varying density.

Various fluorescent tags enable imaging of different cell types in brain-tissue slices. The mixture works on both fresh tissue and tissue that was preserved 50 years ago. The researchers described their method in March in Nature Communications2.

Yet another set of chemicals makes bone transparent, enabling researchers to see into the brains of living mice.

Current approaches require researchers to either cut a window into the skull or shave bone until the skull is thin enough to see through. But both methods can trigger inflammation.

For mice younger than 20 days, an enzyme called collagenase can dissolve collagen in the developing skull. For older mice, a chemical called EDTA disodium can remove calcium from bone.

Researchers applied the appropriate chemical after cutting away a portion of the scalp; 15 minutes later, the skull was clear.

Using a microscopy technique called two-photon imaging, the researchers saw protrusions on the branching arms of neurons up to 250 microns below the brain’s surface. These protrusions allow neurons to receive input from one another. The team also could see immune cells called microglia.

The mice showed no signs of inflammation, the researchers reported in Light: Science & Applications3. The treated tissue regrows, and the method can be repeated.

The brain’s extracellular space makes up 15 to 30 percent of its volume. The space holds ions, nutrients and signaling molecules, but its function is not well understood due to a lack of techniques to study it.

The researchers used a technique called STED microscopy, which produces sharp, white images of extracellular space and dark, crisp shadows where cells and their connections exist. Reversing the exposure highlights the cells instead of the space.

Time-lapse imaging enabled the researchers to watch microglial cells wend their way to an injury site. They also observed previously unseen volume changes in the extracellular space after they provoked seizure-like activity in brain slices.

The technique might one day work in living mice, the researchers wrote in Cell4.