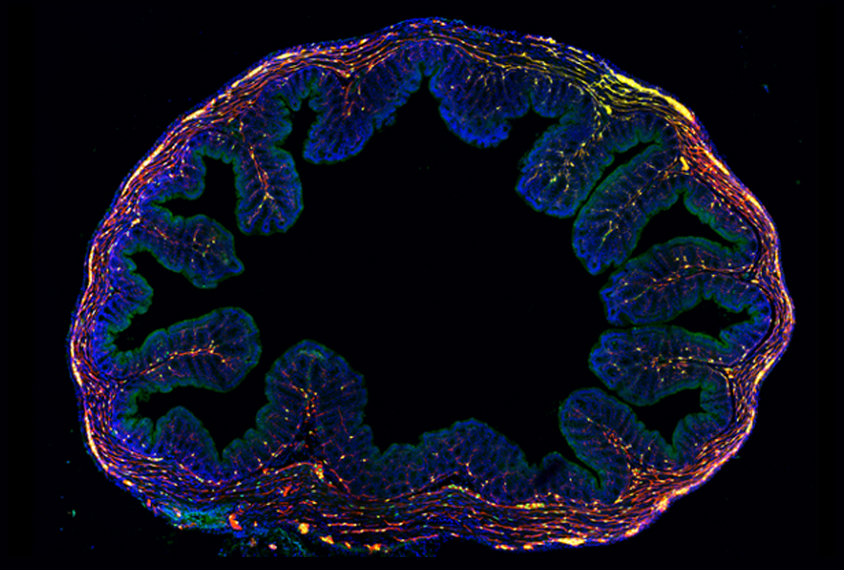 Neuron network: Gut neurons and glia (red, green) are fragile and interwoven with other cells (blue) in the colon, making them tricky to isolate.

A new atlas details gene expression in neurons and other cells from the intestines of mice and people1.

About 40 percent of children with autism or other developmental conditions have gastrointestinal issues, for which researchers have proposed many explanations. Some studies suggest that mutations in genes linked to autism affect neurons in the gut.

In addition, the team identified several genes linked to autism and other conditions expressed in human gut neurons. Autism-linked genes, such as NRXN1, ANK2 and DSCAM, are expressed at higher levels in gut neurons than in other cell types in the colon, which may help explain why gut problems often accompany autism, the researchers say.

Researchers typically examine gene expression in individual cells by plucking the cells — or their nuclei — from tissue and sequencing the messenger RNA (mRNA), the intermediary between genes and proteins, contained within. But this approach is tricky with gut neurons because the cells are rare, fragile and tightly intertwined with surrounding tissues. Also, traditional approaches for isolating nuclei may leave too little mRNA intact for analysis, the researchers say.

To overcome these challenges, the researchers developed a new, gentle method for breaking apart cells in tissue and isolating nuclei. The technique, called RAISIN, leaves the outer membrane surrounding the nucleus and the ribosomes attached to it intact. Because ribosomes translate mRNA into proteins, collecting them too boosts the amount of mRNA available for analysis.

The researchers used RAISIN to tease out cell nuclei in gut tissue samples from 29 mice. The animals were engineered to express fluorescent proteins in their gut neurons and glia, cells that support and communicate with neurons. The researchers then used standard methods to isolate individual fluorescently labeled nuclei and sequence their mRNA.

They used this information to create an atlas of gene expression, classifying 21 types of neurons and three types of glia in the mouse gut. The atlas also reveals gene expression patterns that vary according to age, sex, gut region and time of day.

The team developed another method, called MIRACL-seq, to sort and analyze isolated nuclei that cannot be fluorescently labeled, such as those from people.

MIRACL-seq is based on earlier droplet-based approaches that separate nuclei into microscopic droplets containing DNA strands that bind to the mRNA and act as unique barcodes. Researchers can sequence each droplet’s mRNA, along with its attached barcode, to measure a cell’s gene expression.

Droplet-based approaches are generally inefficient for rare cell types, such as gut neurons. In the new study, however, researchers optimized MIRACL-seq to capture eight times as many nuclei per experiment as usual.

Using RAISIN and MIRACL-seq in tandem, the team examined colon and small intestine tissue from 10 additional mice, none of which expressed fluorescent proteins in gut neurons, and healthy colon tissue from 16 people with colorectal cancer. They used these data to refine their mouse atlas, to create a human atlas and to draw comparisons between the two.

The atlas could help researchers probe the diverse functions of the gut nervous system, the researchers say. It could also shed light on gut-brain connections.