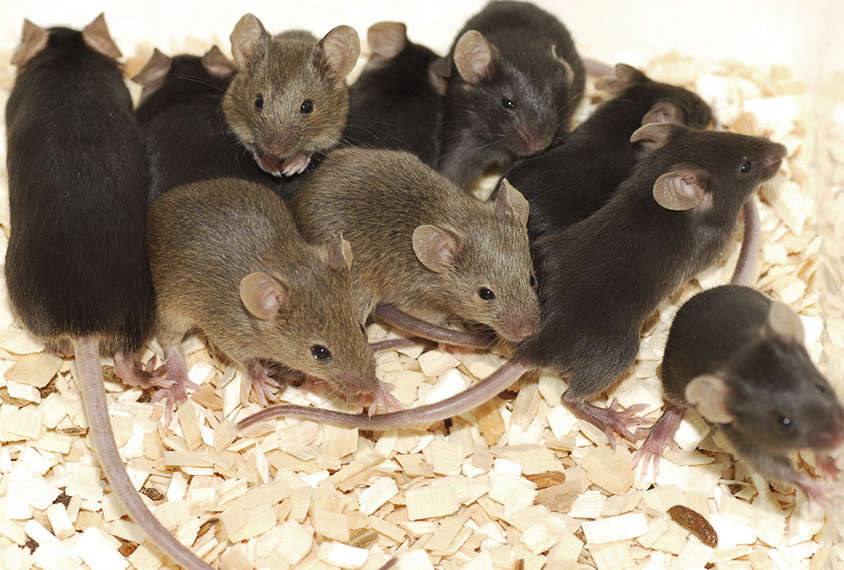 Gut reaction: Mice with a mutation in an autism gene called NLGN3 may show social deficits as well as changes in their gastrointestinal tracts.

Mutations in the gene NLGN3, found in some people with autism, alter mice’s gut nervous system, two new studies suggest1,2. One of these mutations also affects the population of microbes that live inside their gut.

The same genes play a role in the nervous system of both the brain and the gut, so mutations in those genes affect both systems, says lead researcher Elisa Hill-Yardin, associate professor at RMIT University in Bundoora, Australia.

“This is really backing up what families have known for a long time,” she says. “What we might be able to do is treat the gut problems, and it may affect core behaviors.”

NLGN3 is a member of the neuroligin gene family, which is known to be expressed in the gut, but this study is the first to look at how mutations in this gene affect the gut and its microbiome.

“These are important studies,” says Jane Foster, associate professor of psychology at McMaster University in Hamilton, Canada, who was not involved in the research. “[They point to] a completely different therapeutic target than targeting the central nervous system,” she says.

The work also implicates a type of chemical receptor in gut problems related to the mutations. Drugs that target this receptor — for a signaling molecule called gamma-aminobutyric acid (GABA) — might help treat gastrointestinal problems in people with autism, the researchers say. Several of these drugs, such as benzodiazepines, are already available as treatments for anxiety, insomnia and seizures, among other conditions.

However, drugs that work on GABA pathways could either improve or worsen gut problems in people with an NLGN3 mutation, says Kara Gross Margolis, professor of pediatrics at Columbia University, who was not involved in the study.

“When we’re giving patients medications for their brains, we really have to think about their guts as well,” Margolis says.

Mutations in three genes in the neuroligin family are implicated in autism. In 2003, researchers found a mutation in NLGN3 called R451C in two brothers with autism3.

Mice with this mutation express the gene at about 10 percent of typical levels. And they have impaired social interaction and repetitive behaviors, along with changes in brain activity.

Hill-Yardin and her colleagues studied the small intestines of male mice with the mutation, using a red dye to track movement. Food moves faster in the mutants than it does in controls, the researchers found, perhaps because the mutants’ small intestines contain more neurons.

The team also placed colons from the mice into a bath of saline solution. The gut typically contracts for three hours in this bath, driven only by its own nervous system; the frequency of the contractions reflects how quickly food moves through the gut.

Previous studies show that neurons in the brains of mice with the R451C mutation respond more strongly than those of controls to the signaling molecule GABA4.

To determine GABA’s role in the gut, the researchers added drugs to the bath that block either of two types of GABA receptors: A or B. They found that only drugs that block the A receptor have an effect. These drugs decrease the frequency of contractions, suggesting that the A receptors mediate the mutation’s effect on gut movement.

The team also collected feces from mutants and controls at 5 and 9 weeks of age and found that, at 5 weeks, the microbiomes of the mutant mice differ from those of controls. By 9 weeks, however, the difference is smaller, perhaps because the two sets of mice eat each other’s feces, Hill-Yardin says. The results appeared in April in Autism Research.

In a paper published in May in the same journal, the group studied male mice missing the NLGN3 gene, which is on the X chromosome. This mimics the deletion of the gene seen in two people with autism5,6.

The changes to the guts of these mutant mice are subtle. The mice’s guts contract faster and their colons have a slightly larger diameter than those of controls, but it is unclear what health effects these differences have.

“When there’s a little bit of NLGN3 there, it probably creates a bit more havoc” than having none, Hill-Yardin says. When the gene is absent, another neuroligin might step in and take its place, she says.

However, both studies used only male mice, which is a limitation, says Foster. It would also be useful to examine how R451C affects other genes it interacts with in the neuroligin pathway, she says.

Hill-Yardin’s team next plans to determine whether modifying mice’s gut function influences their behavior. They also plan to look at the effects of NLGN3 mutations on gut neurons involved in secretions.