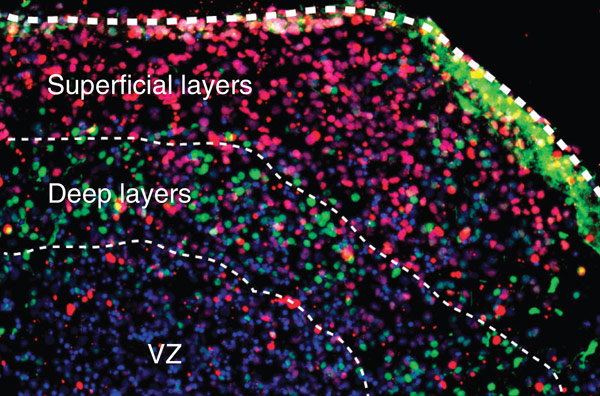 A new cell culture method allows researchers to easily transform skin cells into spheres of firing neurons. The approach, described 25 May in Nature Methods, yields networks of mature neurons that mimic those of the fetal brain at a stage pivotal to the understanding of autism1.

Researchers can create so-called induced pluripotent stem (iPS) cells by reprogramming adult cells from skin, blood or hair. These renewable iPS cells can develop into virtually any type of cell in the body.

For almost a decade, researchers have been growing neurons derived from iPS cells. But the cells require a lot of coaxing to form connections, or synapses. They also grow in flat carpets called monolayers that are a poor stand-in for the three-dimensional structure of the developing brain.

The new method overcomes both of these hurdles. “That’s what we were aiming for — a system that spatially and cyto-architecturally recapitulates the brain, but is also functional,” says lead researcher Sergiu Pasca, assistant professor of psychiatry and behavioral sciences at Stanford University in California.

Because of the of the structures’ likeness to the brain’s neuronal networks, researchers can use them to probe how these networks may go awry in autism.

Pasca is not the first to culture neurons in three dimensions. Other groups have made small brain structures by suspending clumps of cells in firm, protein-rich gels. But Pasca and his colleagues took a different approach, setting colonies of iPS cells afloat in a precisely prepared chemical soup.

They poured this soup, developed through many rounds of trial and error, into special laboratory dishes to which cells can’t adhere. Within hours of entering the broth, the edges of the iPS cell colonies begin to curl inward until they join to form almost perfectly round balls, called spheroids. Within days, the cells develop into nerve-cell precursors and then neurons.

The free-floating spheroids are easy to manipulate. Scientists can slice and study them like whole brains, take them apart for analysis of single cells or turn them into monolayer cultures for high-throughput drug screening. The spheroids survive in the laboratory for up to nine months with little more than a change of medium every few days. This longevity may be key to the neurons’ maturity and their layered arrangement.

The neurons sit in strata similar to those that make up the outer portion of the brain, called the cerebral cortex. They are all excitatory neurons, the researchers say, meaning that the method offers a reliable way to generate a pure population of a subtype of neurons that can then be studied in detail.

After two and a half months in culture, the cells show patterns of gene expression characteristic of neurons about 19 to 24 weeks after conception. Star-shaped cells called astrocytes are scattered among the neurons. In the brain, these cells help neurons form synapses. They are also thought to play an active role in some autism-linked disorders, such as Rett syndrome.

The spheroids crackle with communicative electricity. The researchers cut the spheroids into razor-thin slices and probed them with electrodes to show that the neurons are wired in a functional network. Researchers often use this slice electrophysiology technique in animal studies, but this is the first time they have applied it to three-dimensional cultures of human neurons.