Thousands of children younger than 13 detained under U.S. border policy 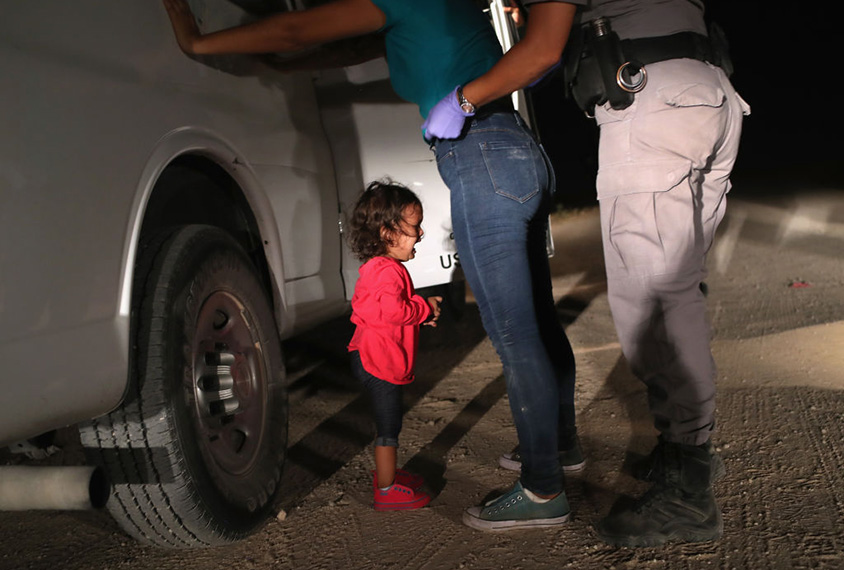 The Trump administration has detained 2,322 children 12 years old or younger amid its border crackdown, a U.S. Department of Health and Human Services (HHS) official told Kaiser Health News on 20 June. They represent almost 20 percent of the immigrant children currently held by the U.S. government in the wake of its latest immigrant prosecution policy.

Their welfare is being overseen by a small division of the HHS — the Office of Refugee Resettlement (ORR) — which has little experience or expertise in handling young children.

The number of children has exploded in the past six weeks since the Trump administration moved to stop parents and their children at the U.S. border, separate them and detain them in different facilities. A total of 11,786 children under age 18 are currently detained, the official said.

President Donald Trump signed an executive order on 20 June that seeks to detain parents and children together. The order also changes oversight of detention from the HHS to the Department of Homeland Security. But it’s unclear whether the children currently detained by the HHS will be transferred and whether the order will comply with a court standard for the treatment of children in custody, known as the Flores agreement.

Since 2003, the ORR has been charged with sheltering and finding suitable homes for ‘unaccompanied alien children’ — generally teenaged immigrants who reach the United States without a parent or guardian.

But its responsibilities have morphed and multiplied since April because the immigration crackdown means that the ORR is now responsible for detaining not only more children, but minors who are far younger than those who had arrived in the past, experts say.

“The children are younger and will be there for a longer time and are deeply traumatized by being forcibly separated from their parents,” says Mark Greenberg, a former administration official at the HHS’ Administration for Children and Families, which oversees the ORR. “All of that makes it much more difficult to operate the program.”

The complex crisis is magnified by the inexperience of some of the political appointees leading the response, say critics who include former officials from both Republican and Democratic administrations of the past decade.

ORR Director Scott Lloyd is a lawyer whose career has been focused on anti-abortion efforts. He led the Trump administration’s legal efforts to prevent abortions for detained teenaged immigrants. Lloyd’s main immigration experience before leading the ORR was research for a report on refugees for the Knights of Columbus, a Catholic service organization with an anti-abortion stance, according to a deposition he gave in a lawsuit filed by the American Civil Liberties Union.

Kenneth Wolfe, the HHS spokesman who provided the figures, declined to address how many people are currently working at the ORR or whether the ORR had secured additional staff or expertise to cope with the influx of young children. He also would not say how many of the 2,322 children aged 12 and younger have been separated from their families.

The administration had previously refused to provide the ages of the children separated from their families — saying only that about 2,300 children have been separated and detained since the policy took effect.

The detention conditions, which include children being held in chain-link holding pens and ‘tent cities,’ have ignited a political firestorm over possible abuse in the treatment of children as young as 4. Some of these younger children — including toddlers — are being sent to ‘tender age’ shelters, according to media reports. The care is also costly: Tents alone cost the HHS $775 per person per day, according to media reports.

Republicans, including former first lady Laura Bush, have called on the administration to stop the policy. Trump has blamed Congress for the detentions, but top White House advisers were actively promoting family separations as a policy shift.

News reports have described children as young as 5 being scolded for playing, one teenager teaching others how to change a small child’s diaper, and caretakers not being permitted to touch children. ProPublica reported that more than 100 children detained are younger than 4.

The ORR, experts add, is already at a disadvantage.

“It’s significantly challenging to create that capacity, and quite expensive,” notes Robert Carey, a former ORR director from the Obama administration. “All the aspects of care are dramatically different based on age. … You need people who are trained in early childhood development or care.”

That’s a heavy lift for an office that, experts stress, was never built to serve as a long-term housing system.

It’s not clear, Carey and others say, that the administration has had sufficient time or support to adapt.

Many ORR employees, Carey says, are career staffers with deep knowledge about immigration and child welfare, with whom he frequently worked while in office.

“The kids are going into the custody of ORR without adequate resources,” says Shadi Houshyar, who directs early childhood and child welfare initiatives at Families USA, an advocacy group. “It’s definitely going to result in some potentially damaging decisions being made. The capacity, training and fundamental orientation — while understanding the needs of children — is not the orientation that ORR has.”

Although the ORR has a history of placing teenagers who arrive on their own with relatives in the U.S., that challenge is heightened by the policy of separating children, who are young and may understand little of the experience or be able to identify relatives who could take them in.

Making matters more complicated, when families are separated, parents and children are tracked by different federal agencies — the parents by the U.S. Department of Homeland Security and the children by the ORR. Children are also tracked and treated the same as minors who arrived on their own. Together, that makes reunification more difficult. And that’s a problem experts worry will persist, even if family separations cease.

“It does not look like they’ve figured out this process,” says a former HHS official, who requested anonymity because she could face professional ramifications for speaking publicly. As a result, she adds, “the time the child stays in ORR could be significantly longer” — which in turn adds to trauma and causes other long-term problems.

Kaiser Health News’ coverage of children’s healthcare issues is supported in part by the Heising-Simons Foundation.