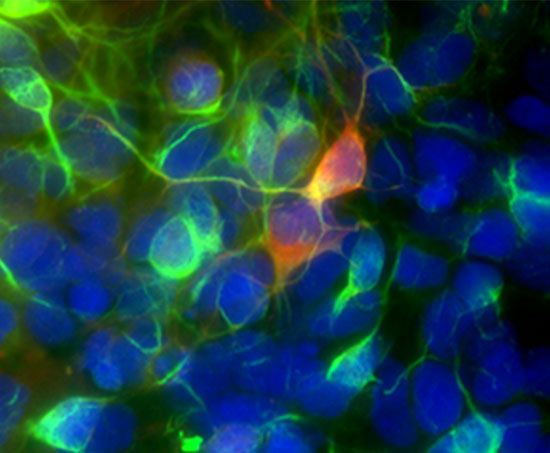 C. Marchetto and A. Muotri Flawed function: Stem cells derived from people with Rett syndrome form neurons that are less healthy than those derived from controls.

Researchers have developed the first stem cell system that makes it possible to study the early development of neurons from people with Rett syndrome, a rare disorder on the autism spectrum.

With the approach, reported 12 November in Cell, the scientists show that stem cells derived from the skin of people with Rett syndrome generate fewer functional neurons than do those from healthy individuals1.

The assay replicates some features of neurons in people with Rett syndrome and in mouse models of disease, suggesting that it is a valid tool to study the syndrome and screen for therapeutics.

“It has been a dream for many neuroscientists to study the early steps of neural differentiation, and to understand what goes wrong to give rise to mental disorders or psychiatric disorders,” says lead investigator Alysson Muotri, assistant professor of molecular and cellular medicine at the University of California, San Diego.

Rett syndrome is caused by missing or mutated MeCP2 protein, and is characterized by progressive deterioration of motor, social and intellectual skills, beginning around 6 to 18 months of age.

With the new assay, researchers can, for example, study therapies tailored to an individual’s specific genetic mutation.

“This allows the possibility of the same individual’s skin cells to be transformed into neurons that have the same genotype,” says Mriganka Sur, head of brain and cognitive science at Massachusetts Institute of Technology, who was not involved with the work.

Using the new system, the researchers tested two drug candidates and showed that they can both rescue the defects. One of the drugs, insulin-like growth factor 1, or IGF1 — approved to treat children with short stature — has already been shown to alleviate symptoms of Rett in a mouse model of the syndrome2.

Researchers in Boston are set to begin testing a synthetic form of IGF1 in a phase 2a clinical trial of people with Rett. “I think that the most compelling thing from our standpoint is that you can give IGF1 to these neurons and basically rescue the phenotype,” says clinical trial leader Omar Khwaja, director of the Rett Syndrome Center at Children’s Hospital Boston, who was not involved with the new study. “It’s even further evidence that the trial should go ahead.”

Back to the beginning:

In 2007, scientists first showed that it is possible to revert human skin cells into an embryonic state by adding four genes that are needed to prevent differentiation3. The resulting stem cells, dubbed induced pluripotent stem cells or iPS cells, can differentiate into all other kinds of cells in the body, including neurons.

In the new study, researchers created iPS cells from skin biopsies of five healthy individuals and four people with Rett syndrome, each carrying a different type of mutation in MeCP2.

When they induced the stem cells to become neurons, the researchers noticed that the neurons generated from people with Rett syndrome have smaller cell bodies than those from controls. Rett neurons also have fewer dendritic spines — neuronal branches that receive signals from other neurons — and make fewer connections, or synapses, with neighboring cells.

The deficits appear within two months of the neuron’s life, suggesting that cells could show abnormal development before symptoms of the disorder arise, Muotri says. Others are more cautious, noting that it’s difficult to judge whether the timing of neuronal development in the laboratory reflects what goes on in human brains.

“We know that things happen faster in a dish,” says Huda Zoghbi, professor of pediatrics and neurology at the Baylor College of Medicine in Houston, Texas, who was not involved with the work. “We don’t know what that translates to in vivo.”

The researchers also observed that Rett neurons have fewer synapses that use glutamate, a chemical messenger that makes neurons more likely to fire. Exposing the neurons to IGF1 for a week increased the number of glutamate synapses.

“The fact that one can reverse this autistic phenotype is encouraging,” Muotri says. “The cells are plastic enough that you can move them back to the normal stage — that’s pretty cool.”

In some cases, however, the treatment stimulated Rett neurons to levels above those of healthy neurons treated with IGF1, suggesting that Rett neurons are more sensitive to treatment. It will be important to pay attention to these findings before moving into clinical trials, experts say.

Although the finding is not statistically significant, Khwaja’s team plans to carefully monitor the trial participants for signs of over-excitability in the brain, such as seizures.

“You don’t want to have hyperexcitability of the brain, you want to get it just right,” Zoghbi says.

Conversely, inhibitory signaling — which dampens neuronal firing — may be key to understanding Rett. A new mouse model of the syndrome reported by Zoghbi’s group last week in Nature lacks MeCP2 only in neurons that release gamma-aminobutyric acid, or GABA, the major inhibitory messenger in the brain. The mice show many features of Rett, the group found 5.

It will be interesting to see if the physiological findings in the mouse can be recapitulated in the iPS cell system, Zoghbi says.

In the new study, Muotri and his collaborators also tested gentamicin, an antibiotic that has been shown to restore MeCP2 levels in cells with a specific type of MeCP2 mutation 4. A low dose of the drug increases MeCP2 levels in Rett neurons and increases the number of synapses that use glutamate, the team found.

Gentamicin can be toxic, but some researchers are trying to synthesize safer forms of the drug. These and other candidates are being screened using the new iPS cell assay, Muotri says.

His team is also studying neurons derived from people with autism, although results are not expected for two or three years.