Small snippets of genes may have big effects in autism 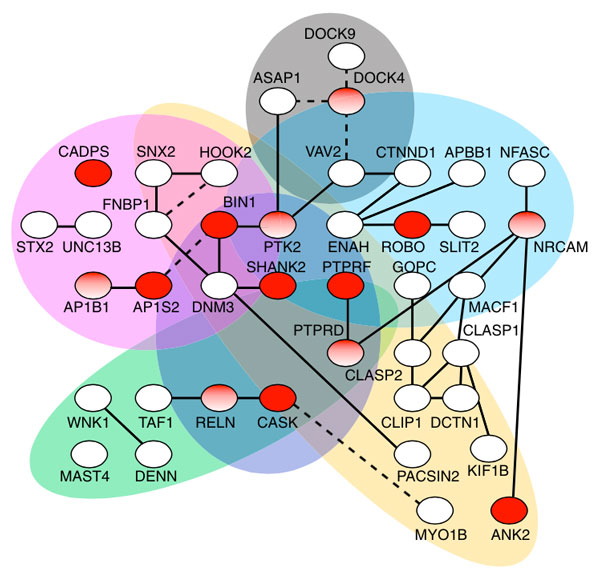 Small pieces of DNA within genes, dubbed ‘microexons,’ are abnormally regulated in people with autism, suggests a study of postmortem brains published 18 December in Cell1. These sequences, some as short as three nucleotides, moderate interactions between key proteins during development.

“The fact that we see frequent misregulation in autism is telling us that these microexons likely play an important role in the development of the disorder,” says lead researcher Benjamin Blencowe, professor of molecular genetics at the University of Toronto.

Genes are made up of DNA sequences called exons, separated by swaths of noncoding DNA.These exons are mixed and matched to form different versions of a protein. This process, called alternative splicing, is thought to be abnormal in autism.

Many sequencing studies tend to skip over microexons because they are not recorded in reference sequences. Although researchers have known about microexons for decades, they were unsure whether the small segments had any widespread purpose.

The new study confirms microexons’ importance, suggesting that these tiny sequences can have big effects on brain development.

“It’s really a new landscape of regulation that’s associated with a disorder,” says Blencowe. “We have a big challenge ahead of us to start dissecting the function of these microexons in more detail.”

Blencowe and his team developed a tool that flags short segments of RNA flanked by sequences that signal splice sites. They used the tool to identify microexons in RNA sequences from various cell types and species throughout development.

In the brain, microexons are highly conserved across people, mice, frogs, zebrafish and other vertebrates. Alternatively spliced microexons are more likely to be present in neurons than in other cell types, suggesting that they have an important, evolutionarily conserved role in neurons.

The researchers analyzed patterns of microexon splicing in the postmortem brains of 12 people with autism and 12 controls between 15 and 60 years of age.

Nearly one-third of alternatively spliced microexons are present at abnormal levels in autism brains compared with control brains, they found.By contrast, only 5 percent of exons longer than 27 nucleotides are differentially spliced in autism brains.

Genes with microexons that are misregulated in autism tend to be involved in the formation of neurons and the function of synapses — the junctions between neurons.Both of these processes are implicated in autism.

Microexons are particularly likely to be misregulated in autism-linked genes, such as SHANK2 and ANK2. What’s more, the expression of a gene called nSR100, which regulates splicing of microexons,is lower in the brains of people with autism than in those of controls.

One future goal is to determine the biology underlying these differences, says Daniel Geschwind, director of the University of California, Los Angeles Center for Autism Research and Treatment. nSR100 belongs to a module of genes that includes transcription factors — which regulate the expression of other genes — and those that modify chromatin, which helps package DNA into the nucleus. Many of these genes have known links to autism.

To look at microexon splicing throughout development, Blencowe and his team sequenced RNA from mouse embryonic stem cells as they differentiated into neurons. Microexon levels tend to spike after the cells finish dividing, hinting at a role in the late stages of neuronal maturation.

Studying microexon regulation at various stages of normal development in people is another logical next step, says Lilia Iakoucheva, assistant professor of psychiatry at the University of California, San Diego, who was not involved in the study. “Then, of course, we can study gene expression in autism brains and then talk about what’s regulated correctly and what’s misregulated.”

As a complement to the postmortem data, the researchers could also look at how microexons are regulated in developing neurons derived from people with autism, says Chaolin Zhang, assistant professor of systems biology at Columbia University in New York, who was not involved in the study.

“We should not underestimate the potential of more detailed characterization of these splicing variants,” he says. “They really expand the genome and [its] complexity in an exponential way.”

Yang Li, a postdoctoral fellow at Stanford University in California also applauds the attention to the microexons. “There’s still not enough recognition that different [forms of proteins] can have very different functions,” he says. “This is especially true in the brain.”

In an independent study published in December in Genome Research, Li and his colleagues reported that microexons in the brain tend to encode amino acids in locations that are likely to affect protein-protein interactions2. They also found that the autism-linked RBFOX gene family regulates microexon splicing in the brain.

“I definitely think that microexons are important because of how conserved they are in terms of brain function,” says Li. “But I don’t know if they cause autism.”