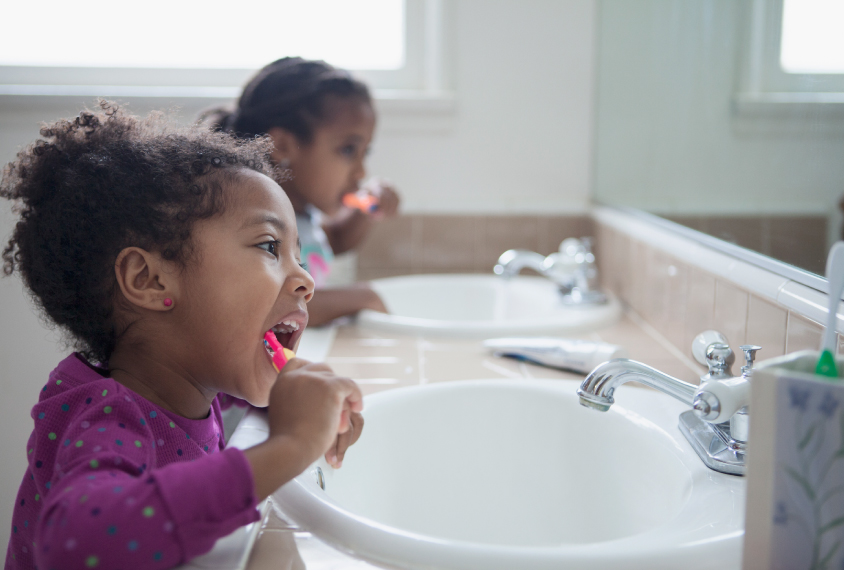 Tricky tasks: Autistic children who show a lot of repetitive behaviors may have trouble learning life skills such as brushing their teeth.

How well autistic children perform basic tasks of daily living — dressing, grooming and the like — at about age 6 depends on their language skills, age of diagnosis and the extent of certain autism traits between ages 2 and 4.

The severity of their autism also predicts how quickly they learn the tasks, according to a new study1. The work also shows that their skills improve over their preschool years, in line with previous work.

Many studies have focused on daily living skills in autistic adolescents and adults. But relatively few have examined these skills in young children, and only two have looked specifically at how daily living skills evolve over time in young autistic children2,3. One found that the rate at which children acquire the skills decreases over time; the other reported that the rate increases.

The new work helps resolve this discrepancy by analyzing observations from a larger group of children.

“What we are finding is a discrepancy, particularly in individuals with average IQ or higher, where their daily living skills are much lower than you would predict by IQ,” says Laura Klinger, associate professor of psychiatry at the University of North Carolina at Chapel Hill, who was not involved in the research. “It’s a really important intervention target that perhaps we haven’t focused on in the past.”

Di Rezze and his colleagues analyzed data from 278 autistic boys and 53 autistic girls in Canada. The data were collected as part of a long-term study spanning five sites, in which autistic children are followed from diagnosis into adolescence.

The researchers looked at the children’s scores on one section of a test called the Vineland Adaptive Behavior Scales; this section measures daily living skills such as brushing teeth and getting dressed. They included scores taken at four time points: just after diagnosis, 6 months later, 12 months later and at the end of their first year of school, around age 6.

Each of the children’s scores increased over time, but the rate of improvement varied.

The researchers divided children into two groups based on the severity of their traits, as measured by the Autism Diagnostic Observation Schedule. The 10 percent of children with the least severity improved more quickly than the other 90 percent. However, the researchers did not find a statistically significant link between the scores at age 6 and severity at various ages.

The team found other variables that are predictive. Children who have more repetitive behaviors tend to have worse daily living skills at age 6 than those with fewer behaviors. Some studies have shown that repetitive behaviors interfere with children’s ability to learn from their environment, Di Rezze says.

The preschool years are important because they provide an early indication of what’s to come, experts say.

Di Rezze’s team is studying how the school and home environment, including supports and services, affect children’s daily living skills over time.