A new engineered protein that glows in the presence of serotonin enables researchers to track the neurotransmitter’s levels and location in the brains of living mice, according to a new study. This ‘serotonin sensor’ could help elucidate serotonin’s role in autism, experts say.

Serotonin helps regulate mood, circulation and digestion, among other functions. Some people with autism have elevated levels of serotonin in their blood. Other evidence links serotonin to social behavior in mice.

“Serotonin is wildly important both for basic research and human health. And for the longest time, ways to measure it were very indirect,” says co-lead researcher Loren Looger, a Howard Hughes Medical Institute investigator at the HHMI Janelia Research Campus. “Only with sensors like this can one follow it in vivo, which is critical.”

Unlike other tools for measuring serotonin, the sensor can also show changes in serotonin activity over time, making it an exciting tool for autism research, says Jeremy Veenstra-VanderWeele, professor of psychiatry at Columbia University, who was not involved in the study.

“This tool will make it possible to understand the relationships between serotonin release and complex behaviors, including in different genetic mouse models related to autism,” he says. “I imagine that this tool will come into fairly broad use.”

Broad dissemination of the tool could help neuroscientists unravel the dynamics of serotonin release over time, says co-lead researcher Lin Tian, associate professor of biochemistry and molecular medicine at the University of California, Davis.

The new sensor originated from one described last year that detects a different neurotransmitter, acetylcholine. Looger and his team used a computer algorithm to redesign the acetylcholine-binding portion of the sensor protein so that it could attach to serotonin instead.

To test the design, the team used a hollowed virus to insert the gene encoding the protein into the striatum of mice. Two weeks later, they viewed slices from the striatum — a hub for serotonin activity — and saw the protein’s green glow. Electrically stimulating neurons in the slices to release serotonin increased the glow, as did bathing the slices in serotonin.

The researchers also injected the sensor-delivering virus into brain regions that are regulated by serotonin — namely, the amygdala and prefrontal cortex. These two regions process fear. The team trained the mice to associate a sound and light with a mild electric shock to the foot. Optical recordings of the animals’ neurons showed a rise in serotonin while the sound and light played, followed by a sharp dip when the shock arrived. 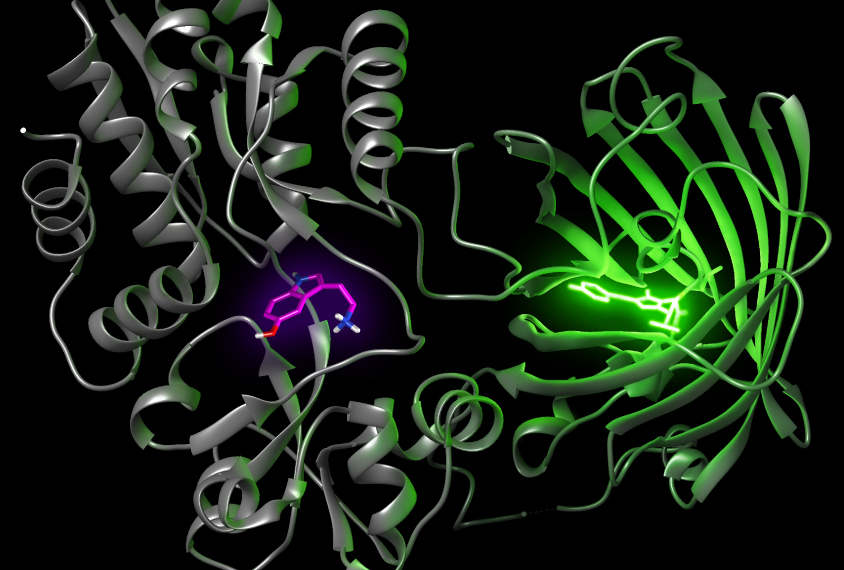 Happy glow: An engineered protein lights up in the brains of mice when their neurons release mood-modulating serotonin.

In a third test, they injected the sensor into these same two brain areas in the mice, as well as the bed nucleus of the stria terminalis, which is involved in stress responses and social behaviors. Live recordings of groups of neurons showed serotonin release in all three brain areas during social interactions with an unfamiliar mouse. Animals that had access to an exercise wheel for six weeks before the interactions — an activity known to ease stress — showed even higher serotonin spikes in the prefrontal cortex.

The sensor also revealed levels of serotonin in the animals’ brains, glowing in step with electrical recordings of their serotonin neurons: Serotonin activity rose when the animals woke and dropped as they transitioned through certain stages of sleep.

The work appeared in December in Cell.

For instance, for mice to prefer social stimuli over being alone, they must release serotonin in the nucleus accumbens, a brain area involved in processing social reward, according to a 2018 study. Artificially increasing serotonin levels in this brain region restores social behavior in an autism mouse model.

The serotonin sensor could provide researchers with “an opportunity to look at the actual pattern of release that’s involved in shaping that sort of preference,” Veenstra-VanderWeele says.

The brains of most animals use serotonin in similar ways, so the tool might also illuminate the neurotransmitter’s role in autistic people and could help pave the way for more effective treatments.

“The ability to detect serotonin in the brain is a really useful tool for translational neuroscience,” says Gül Dölen, associate professor of neuroscience at Johns Hopkins University in Baltimore, Maryland, who was not involved in the work. “Serotonin is an evolutionarily ancient neurotransmitter that has been implicated in encoding social behaviors in a wide variety of species, which has the potential to be targeted for treating social impairments in autism.”

For now, the sensor is not sensitive to small bursts of serotonin, Looger says. His team plans to improve its sensitivity going forward.