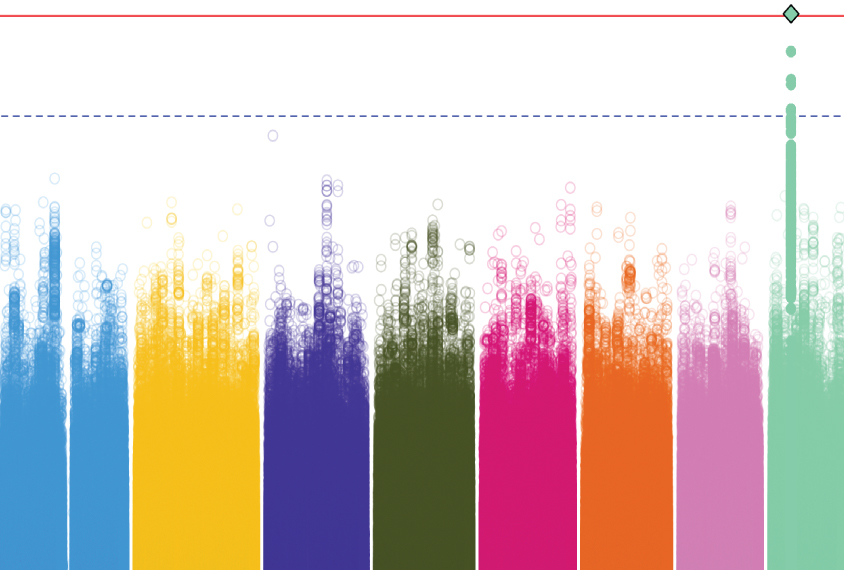 New associations: Variants in a region of chromosome 8 (light green) may influence a person’s odds of having autism.

Lowered expression of a gene called DDHD2 may increase a person’s likelihood of autism, according to a new analysis1.

The researchers arrived at this conclusion via a genome-wide association study (GWAS), an approach used to identify common variants — in the form of single-letter changes to DNA that are found in more than 1 percent of the population — linked to autism.

Scientists have identified many rare variants associated with autism, but together these account for only a small fraction of all cases and often occur spontaneously, so they cannot fully explain why autism tends to run in families.

Common variants, by contrast, account for more than 50 percent of autism’s heritability, says co-lead researcher Hyejung Won, assistant professor of genetics at the University of North Carolina at Chapel Hill. “That’s why we thought it would be super important to understand this class of variation.”

The new analysis identifies two new regions of the genome that harbor common variants tied to autism. One region controls the activity of DDHD2, linking the gene to autism for the first time. Mice missing DDHD2 have motor and cognitive impairments, according to earlier research2.

Because the gene has no previous association with autism and the result is based on a relatively small sample, this finding “should be interpreted with caution,” says Tinca Polderman, associate professor of child and adolescent psychiatry at Amsterdam UMC in the Netherlands, who was not involved in the work.

Won and her colleagues based their analysis on data from 6,222 autistic people in a genetic registry called SPARK. (SPARK is funded by the Simons Foundation, Spectrum’s parent organization.) They also generated an equal number of ‘pseudocontrols’ by using data from the typical parents of autistic children enrolled in SPARK, looking only at the copies of genes, or alleles, the parents did not pass on to their children. This technique differs from other autism GWAS, which use genetic data from unrelated typical controls.

After examining single-letter variations, or single nucleotide polymorphisms (SNPs), at nearly 9 million sites across the genome, the researchers found two that appear significantly more often in people with autism than in those without the condition. Both variants occur in the same region of chromosome 8, where DDHD2 is located.

Won and her colleagues pooled the SPARK data with a 2019 GWAS of more than 18,000 autistic people and 27,000 controls. The combined dataset revealed four other regions of the genome that have statistically stringent ties to autism, three of which were originally unveiled by the 2019 work.

Next the team sought to understand how these variants influence individual genes and, in so doing, a person’s likelihood of having autism. They evaluated variants from all five autism-linked regions using a bioinformatics tool they developed called H-MAGMA3. The tool links SNPs to genes based on their 3D proximity to one another in fetal brain tissue samples.

This analysis flagged 263 genes, including 5 that have known ties to autism — KMT2E, RAI1, BCL11A, FOXP1 and FOXP2 — and 14 that show different patterns of expression in postmortem brain samples from people with autism versus controls, including DDHD2.

They then tested 98 variants near the SNPs on chromosome 8 to gauge their impact on gene expression, using a ‘massively parallel reporter assay’ (MPRA) — a technique that reveals whether a variant can influence the expression of a ‘reporter gene,’ which lights up in cultured cells. One variant in particular strongly dampens gene expression, they found.

Additional analyses of gene-expression data from typical fetal and adult brains, and from postmortem brain samples from autistic people, suggests that this variant dampens the expression of DDHD2 in the brain. The results were published in August in Translational Psychiatry.

“My largest concern with this study is the relatively small sample size,” Polderman says. For this type of study to have sufficient statistical power, it should include data from at least 25,000 autistic people and at least that many typical controls, she says. Although the study examined data on more than 24,000 people, the findings on DDHD2 came from only about 6,000 people.

But the study has other strengths, experts say.

One real strength is in the additional analyses — and in particular the MPRA analysis — aimed at interpreting the GWAS signals, says Jakob Grove, associate professor of biomedicine at Aarhus University in Denmark, who was not involved in the new work but led the 2019 study.

“I expect we will see more of that,” he says. “GWAS hits are intrinsically hard to interpret.”

Future hunts for autism-linked variants using GWAS will require larger samples, Grove says. Still, he adds, “it is very comforting to see that adding a sizable 6K or so cases and a measure of ingenuity bring about new genes and new knowledge. To me that indicates that the field is on a good trajectory and that we are making steady progress.”