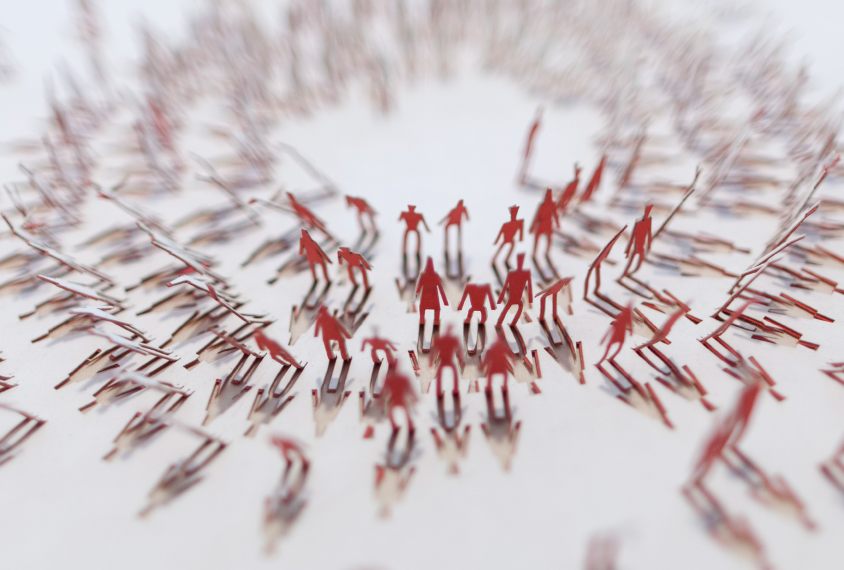 Strength in numbers: Common genetic variants together account for up to half the risk for autism.

A new analysis of DNA from more than 20,000 people with autism identifies 12 regions in the genome that harbor inherited risk factors for the condition. The findings appear today in Nature Genetics1.

The study is the largest-yet exploration of inherited variants that influence autism risk. It focuses on common variants — those present in at least 1 percent of the general population.

Rare, spontaneous mutations account for only about 10 percent of autism cases, and they cannot explain why autism runs in families; common variants are, by contrast, thought to account for up to half of the risk for autism.

Until now, the largest attempt to link common variants to autism involved roughly 7,400 people with the condition. Published in 2017, that study identified just one possible candidate, on chromosome 10.

In November 2017, the same team posted the new study to the preprint server bioRxiv. In this study, they linked five new regions to autism and tied seven others to both autism and another brain condition or cognitive trait.

Still, the new findings represent “the tip of the iceberg” for common variants implicated in autism, because the study is small compared with those investigating other psychiatric conditions, says co-lead investigator Anders Børglum, professor of medical genetics at Aarhus University in Denmark. The largest study of variants linked to schizophrenia, for example, includes 37,000 people with that condition.

Børglum and his colleagues analyzed DNA from 13,076 people with autism and 22,664 controls enrolled in the iPSYCH project, a study of genetic risk for five brain conditions in the Danish population. They also incorporated data from 5,305 people with autism and an equal number of controls from a similar international project, the Psychiatric Genomics Consortium.

The team used a tool called PsychChip to reveal single-letter variations in the genetic code at 9.1 million sites across the genome. They performed a genome-wide association study (GWAS), searching for single-letter variants that occur more frequently in people with autism than in controls. They found that 88 variants are associated with autism.

They confirmed 53 of these variants in an independent sample of 2,119 autistic people and roughly 142,000 controls. Applying statistically stringent criteria, they identified five variants in all that meet the definition of an autism risk factor. Each variant exerts a small effect — altering risk for the condition by 20 percent or less.

“They have good replication here, so these results are rather robust,” says Tinca Polderman, assistant professor of complex trait genetics at Vrije Universiteit Amsterdam in the Netherlands, who was not involved in the study. This sort of replication is the gold standard in the field, she says, but this is the first time it has been done successfully in a GWAS of autism.

When the researchers compared their autism variants with GWAS data for 234 other traits or conditions, they found significant overlap with variants implicated in schizophrenia, depression, high intelligence and high educational attainment. Their analysis of the overlap revealed another seven variants that passed their rigorous threshold for autism risk.

“Some of [the new variants] are linked to autism and these other phenotypes, and some of them are linked only to autism,” says co-lead investigator Mark Daly, chief of the Analytic and Translational Genetics Unit at Massachusetts General Hospital in Boston.

The newly identified variants lie within or near 15 genes, many of them expressed in the brain. The most strongly implicated is KCNN2, a gene that controls potassium ion flux in neurons. And some of the genes, including KMT2E and PTBP2, are known to carry de novo mutations implicated in autism.

Many of the genes are expressed during mid-fetal development, when autism genes are typically most active.

“This is a very good validation that what they’re capturing is true and meaningful, even though the effect sizes are small,” says Hakon Hakonarson, director of the Center for Applied Genomics at the Children’s Hospital of Philadelphia, who was not involved in the study.

Still, the autism variants the researchers flagged aren’t necessarily causal. As sample sizes increase, researchers should be able to better establish the ones that are, says Thomas Bourgeron, professor of genetics at the Institut Pasteur in Paris, who was not involved in the study. “Very soon we will see what is rubbish and what is less rubbish,” he says.

This result jibes with the observation that rare, de novo mutations in autism are predominantly found in people with below-average intelligence.

The researchers calculated a ‘polygenic risk score’ for each participant by summing the effects of their common variants. Individuals who score in the top 10th percentile have nearly three times the odds of having autism as those in the lowest 10th percentile, they found.

An even larger number of samples should enhance the predictive power of the polygenic risk scores and might even enable researchers to pinpoint variants that distinguish people with different forms of autism, Børglum says.