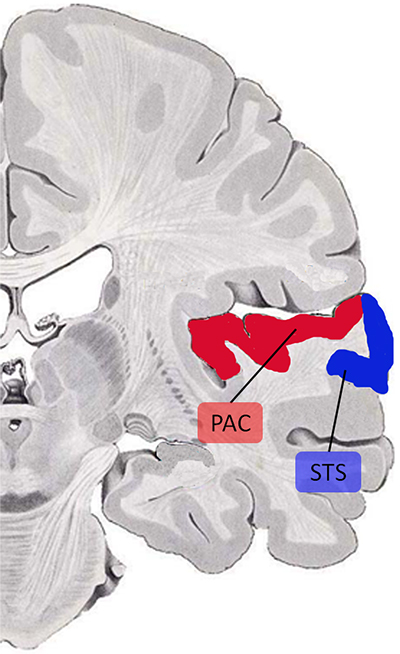 People with autism show differences from controls in the levels of microRNAs, small noncoding bits of RNA, in the social and sound-processing parts of the brain. Unpublished results from the postmortem study were presented Wednesday at the 2013 Society for Neuroscience annual meeting in San Diego.

MicroRNAs, or miRNAs, bind to messenger RNAs, which code for protein, and flag them for degradation. Each miRNA can interfere with the production of several proteins. For example, a 2011 study linked the lack of miR-125a to denser dendritic spines, the signal-receiving branches of neurons, and to higher levels of postsynaptic density-95, a protein associated with autism.

Postmortem brain studies have shown that some miRNAs are expressed differently in the brains of people with autism.

In the new study, researchers analyzed the postmortem brains of ten individuals with autism and eight controls, aged 4 to 60 years, from Autism BrainNet, formerly known as the Autism Tissue Program. (The resource is partly funded by the Simons Foundation, SFARI.org’s parent organization.)

The researchers measured miRNA expression in the primary auditory cortex, which processes sounds, and the superior temporal sulcus (STS), a brain region that integrates sensory input and social cues. Both of these regions have been implicated in autism.

Of the more than 5,000 miRNAs and other small noncoding RNAs that the researchers screened, they found 3 miRNAs that are dysregulated in these regions in people with autism compared with controls.

The three differentially expressed miRNAs in the STS and the primary auditory cortex each have about 900 targets, which are implicated in 36 pathways and processes, says Bradley Ander, assistant project scientist in Cynthia Schumann‘s lab at University of California, Davis, who presented the work.

Ander divided the pathways into four functional categories. The STS miRNAs that are dysregulated in people with autism are involved in the insulin signaling pathway, immunity, cell cycle and, interestingly, brain signaling.

“A lot of them are related to synapse function and neurotransmitter transmission,” Ander says.

The miRNAs dysregulated in the primary auditory cortex are involved in more general signaling pathways, including the mammalian target of rapamycin (mTOR), a pathway associated with cancer and fragile X syndrome.