Risk of epilepsy in autism tied to age, intelligence 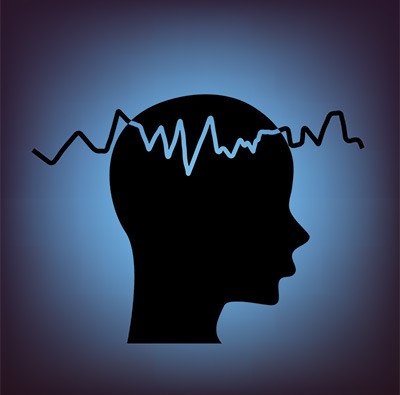 Electrical storm: About half of people with autism have unusual electrical brain waves even when they don’t have epilepsy.

Children with autism who are older than 13 years and have low intelligence are at the greatest risk of having epilepsy, says one of the largest epidemiological studies on the issue to date1.

Children are typically diagnosed with epilepsy after having at least two seizures — uncontrolled surges of electrical activity in the brain. About 2 percent of the general population has epilepsy2. Most studies peg its prevalence among people with autism at 30 percent.

The new study, published 4 July in PLoS One, breaks down this prevalence by age. It finds that among children with autism, up to 12.5 percent of children aged 2 to 17 have epilepsy. The rate is largely driven by epilepsy in children aged 13 to 17, who have more than double that prevalence.

The study also found that low intelligence — defined as having an intelligence quotient (IQ) below 70 — is associated with a cluster of symptoms seen in people who have both epilepsy and autism. The symptoms include difficulty with daily living, poor motor skills and language ability, regression and social impairment.

Many of the previous studies on epilepsy in autism are based on small numbers or bias the sample by recruiting participants from clinics specializing in epilepsy, says Eric Morrow, assistant professor of biology at Brown University in Providence, Rhode Island, and lead investigator on the new study.

To eliminate this bias, the study tapped four large American autism databases, with 5,815 children in total, and found that 289 of them have epilepsy.

“There is a new style of research in autism now emerging, which is trying to build larger and larger datasets,” Morrow says. “The overriding thing that we’re all trying to contend with in autism is the huge heterogeneity.”

The new study’s large numbers give credence to its findings, but other researchers point out that the datasets — the 2007 National Survey of Children’s Health and three genetic databases, the Autism Consortium, the Autism Genetic Resource Exchange and the Simons Simplex Collection, a dataset run by SFARI.org’s parent organization — are not intended to investigate epilepsy rates.

The Simons Simplex Collection, for example, designed to find genetic differences in people with autism, excludes people who have fragile X syndrome and most people with autism who have an IQ below 75. Both of those groups are known to have high rates of epilepsy. As such, the registry records an epilepsy prevalence of only 2.9 percent, the lowest among the four datasets.

The other three datasets yield average epilepsy rates of 12.5 percent, 7 percent and 5 percent, respectively. The 2007 National Survey of Children’s Health, a phone-based survey, may have the highest rate because it relied on parent reports for the autism diagnoses and did not verify them with any tests.

“Before, the ranges were all over the place,” says Orrin Devinsky, director of the New York University Comprehensive Epilepsy Center, who was not involved in the study. “I think this study gives values that make sense and probably, in part, may reflect some aspects of the patient populations that they were taken from.”

Most children develop epilepsy during the first three years of life. But children with autism show a second spike in epilepsy in early adolescence. This makes age an important factor when studying prevalence, Morrow says.

“If you’re going to measure the prevalence of a particular condition, in this case, epilepsy, you want to know whether you’re through the age of risk,” Morrow says.

Although the exact prevalence of epilepsy varies among the four datasets, each shows the same trend of greater prevalence with age.

When the rates are broken down by age, in the three genetic datasets, about 10 percent of children aged 13 and older have epilepsy. That rate jumps to 26 percent in the 2007 National Survey of Children’s Health.

“The older the participant, the greater the percentage of epilepsy, at least in the first two decades [of life],”Morrow says.

A smaller study of 101 children with autism, published 20 July in the Journal of Autism and Developmental Disorders, found that those who have repetitive behavior or aggressive conduct are also more likely to have unusual electrical activity in their brains than those who do not show such behaviors3. The results are less pronounced in children with autism who do not have intellectual disability.

Other studies have found an association between epilepsy and low intelligence in children with autism.

“It’s not that surprising that if you have more global disruption in the form of a lower IQ and autism, you’d be at higher risk for having epilepsy,” says Elliott Sherr, professor of neurology and pediatrics at the University of California, San Francisco, who was not involved in the study.

In addition to intellectual disability, many children with autism have co-occurring conditions such as language delay or attention deficit hyperactivity disorder, which can make it challenging to diagnose epilepsy.

“It can be very difficult to separate out what’s a language problem, what’s an attention problem and what’s a problem related to autism from what’s a seizure,” Devinsky says.

Given that epilepsy may affect about one-third of children with autism, he says, “one of the issues for the future is to come up with more standardized criteria of what is epilepsy, specifically in the autism population, which has not been done.”