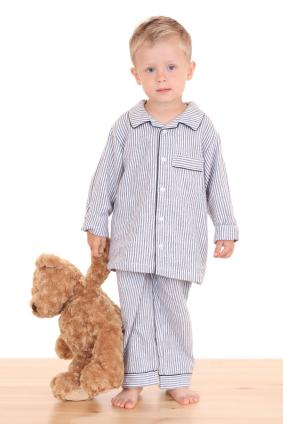 Clock wise: There may be molecular links between circadian rhythms and synaptic activity.

For parents of children with autism, bedtime can be a boondoggle.

Some children with autism replay cartoons in their head or talk incessantly during the three to five hours it can take them to wind down and go to sleep1. In fact, up to 83 percent of parents report some type of sleep disruption in their children with autism ― notably difficulty falling asleep or frequently waking in the middle of the night2.

Although the biological underpinnings of these sleep disorders are unknown, some studies ― including ones on the growing number of animal models ― indicate that the disruptions may hold molecular clues to the interconnected pathways involved in autism.

The best evidence for a biological link between sleep disruptions and autism comes from animal models of fragile X syndrome, a related disorder resulting from a single mutation in the FMR1 gene. The disorder accounts for between two and six percent of all autism cases.

In one model of the syndrome, for example, fruit flies lacking FMR1 are restless sleepers. “The first thing we found was a robust circadian defect,” says Thomas Jongens, geneticist at the University of Pennsylvania.

Mouse mutants that lack both the FMR1 gene and a related gene, FXR2, also exhibit a complete lack of circadian behavior. But, unlike in the flies, not even light cues activity in these mice, according to David Nelson, molecular geneticist at Baylor College of Medicine in Houston.

FMR1 and FXR2 may help maintain normal clock behavior, Nelson says. His mice have short sleep periods, another common feature reported in individuals with autism. “We’ve been trying to understand the contribution of other genes to the phenotype seen in mice lacking the FMR1 gene,” he says.

Translating this to humans, there may be some fraction of people with fragile X syndrome who have variations in genes other than FMR1.

“It’s common in vertebrates that multiple members of a gene family have overlapping functions, so we want to see if other genes step in and assume FMR1 functions,” Nelson says. “The better we understand what FMR1 is doing, I think the more likely it is we’ll identify additional target genes in the same pathways doing some of the same jobs ― hopefully finding candidate genes for similar disorders.”

The role that any of these genes play in the circadian clock is still unclear, but some researchers say there are obvious links between synaptic and circadian pathways.

Work in fruit flies has shown that synapses in the flies form and degenerate cyclically every 24 hours, and that motor activity at these synapses is subdued at appropriate points in the circadian cycle because of fewer connections between muscles and motor neurons, notes Brad Nicholas, geneticist at the University of Wales in Bangor.

There may also be more complicated interconnections between synaptic transmission and circadian clocks.

For example, the RAB3A gene, which has a regulatory role in synaptic transmission, also alters circadian period and response to sleep loss in mice4. A simple assumption is that, in mammals, it is important to have proper synaptic transmission for the circadian clock to function, says geneticist Maja Bucan at the University of Pennsylvania School of Medicine.

More recently, Bucan and her colleagues have found that of the 3,000 genes whose expression is sleep- or circadian-dependent, a subset are also important for synaptic development and function5.

Several of these genes may turn out to be deleted or duplicated in autism, but it is not clear that this leads to sleep anomalies associated with the disorder, Bucan says. “We have all the tools to address the link between autism and sleep disturbances,” she adds.

Thomas Bourgeron, a geneticist at the Institut Pasteur in Paris, has documented what he calls the “neuroligin autism pathway” based on the role of neuroligins, proteins including SHANK3 that bind the pre- and post-synaptic neurons together, and help form functional synapses6.

Bourgeron is known for laying the foundation for the theory that synaptic abnormalities are at least partly responsible for autism. It’s not fully understood exactly what neuroligins do at the synapses, but Bourgeron says circadian abnormalities such as a deficiency in melatonin ― a hormone that helps regulate the 24-hour sleep/wake cycle ― may modulate their function.

Interestingly, circadian disruptions have not been documented in either of the two recently proposed mouse models of autism involving mutated neuroligins7,8.

But another autism mouse model9 that lacks a portion of the post-synaptic receptor known as GABA-A shows disturbed rest and activity patterns10. These mutant mice are able to maintain circadian rhythms, but their REM sleep is lower than that of their normal counterparts11.

The most consistent results linking abnormal circadian rhythms to autism are based on observations that blood melatonin levels are often lower in children with autism than in developmentally normal children. Melatonin has also been shown to be a successful treatment for children with autism who have sleep disorders12.

Last year, Bourgeron and others reported abnormal melatonin synthesis in several individuals with autism ― and suggested that the defective last gene in the melatonin synthesis pathway, dubbed ASMT, is a risk factor for autism13. But a follow-up study in Europe last year did not find any significant link between ASMT gene variants and autism14.

The only existing evidence that clock gene mutations are linked to autism comes from a study that found that genetic variants in 2 of 11 clock and clock-related genes are associated with autism15. The study was based on too small a sample size to be definitive, however.

Some researchers say synaptic pathways may control the circadian clock’s output rather than disrupt the clock altogether.

Jongens, who developed the fruit fly model of fragile X syndrome, is mapping which neurons require activity of DFMR1 for normal circadian rhythms in Drosophila.

The gene is most likely involved in the transformation of information from these neurons to the brain, Jongens says. “In circadian speak, at least in the fly model, it’s a classic output pathway defect,” he says.

Because sleep anomalies are a common symptom in neurological disorders, gathering evidence between sleep disorders and autism is tricky. “In every psychiatric disorder, someone has found a problem with melatonin so nobody believes these results anymore,” notes Bourgeron.

But some ― clinicians and geneticists alike ― are convinced that sleep disorders are as characteristic of autism as are repetitive behaviors and language delay. Sleep may also be a more quantifiable trait by which to segregate different subsets within the disorder for genetic studies.

“Being able to subtype autistic traits can help refine our genetics research,” says Beth Malow, a neurologist at Vanderbilt University. “Sleep is one way to do that, and I think it could be viewed as prominently at language delay.”