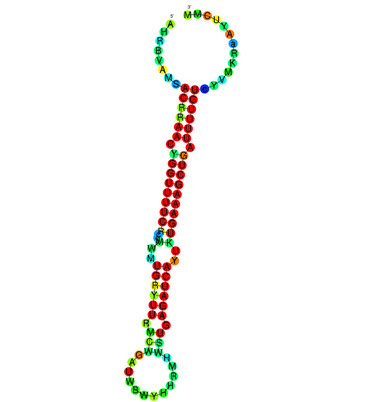 Researchers have charted the expression of tiny pieces of RNA — called microRNAs or miRNAs — in postmortem brain tissue from people with autism, according to unpublished research presented Tuesday at the 2011 Society for Neuroscience annual meeting in Washington, D.C.

miRNAs help turn genes on and off, providing an extra layer of regulation on top of the DNA sequence. Dozens of miRNAs are expressed differently in several regions of autism brains compared with controls, the study found. What’s more, preliminary analyses suggest that these miRNAs target genes and pathways linked to autism.

In the autism field, “we have a lot of information on transcriptomes: what genes are up-regulated or down-regulated,” says lead investigator Carlos Pardo, associate professor of neurology and pathology at Johns Hopkins University in Baltimore.

“But those genes are up-regulated or down-regulated because of microRNAs,” Pardo says. “[miRNAs] are the master regulators of gene expression.”

In the new study, Pardo’s team analyzed miRNA expression in seven autism brains and ten age- and gender-matched controls from the Autism Tissue Program and the University of Maryland Brain Bank.

The researchers focused on five regions of the cerebral cortex: the mid-frontal gyrus, mid-temporal gyrus, anterior cingulate gyrus, fusiform gyrus and the occipital cortex. The first four areas are known to be involved in autism, whereas the last has a minimal role.

The researchers found 43 miRNAs expressed at either higher or lower levels in autism brains than in controls. Of these, 18 are expressed in the mid-frontal gyrus, 12 in the anterior cingulate, 8 in the fusiform gyrus, 3 in the mid-temporal region and 2 in the occipital cortex.

Using a more fine-grained analysis, the study found that, for example, miRNA-222, which is expressed at lower-than-normal levels in the mid-frontal gyrus, is expressed mainly in layers 2 and 5.

The researchers then looked at the genes and pathways affected by the dysregulated miRNAs. For instance, miRNA-222 targets GRIN2A, a gene linked to autism and schizophrenia, as well MeCP2, the gene mutated in the autism-related Rett syndrome. The same miRNA also affects the expression of genes that encode receptors for gamma-aminobutyric acid and NMDA. A pathway analysis shows that miRNA-222’s target genes are involved in neurological disease, developmental disorders and nervous system development.

For example, miRNA-21, which is expressed in the anterior cingulate gyrus, targets genes involved in both neurological development and immune response pathways.

“That is something that we’ve talked a lot about recently, where you have a lot of immune-related functions showing up in autism,” says Arun Azhagiri, a postdoctoral fellow in Pardo’s laboratory. For example, a study earlier this year found that immune-system genes tend to be expressed at lower levels in autism brains than in controls.

The researchers are doing a detailed comparison of gene expression and miRNA expression in autism brains, he says.