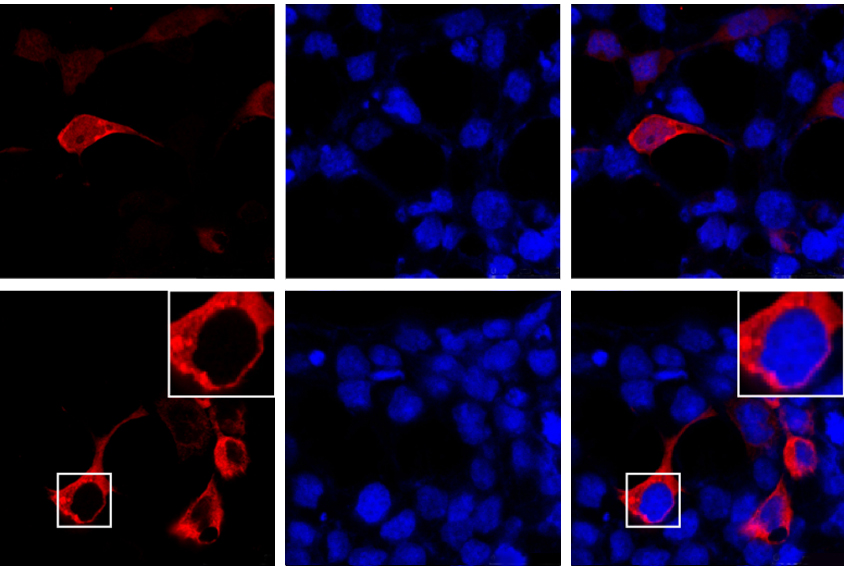 Detailed look: Some mutations in the autism gene NCKAP1 interfere with a cell’s ability to transport NCKAP1 protein into and out of its nucleus.

Many people with mutations that disrupt a gene called NCKAP1 have autism or autism traits — along with speech and language problems, motor delays and learning difficulties — according to a new study. The results, from a large international team of researchers and clinicians, clarify how mutations in NCKAP1 affect people and solidify its position as a top autism gene.

Sequencing studies over the past decade have turned up three autistic people with de novo, or non-inherited, variants that likely disrupt NCKAP1, putting it on a list of genes strongly tied to autism. Other work has shown that mice that do not express the gene have atypical brain development.

But those reports contain little information about the outward characteristics of people with NCKAP1 mutations — which are challenging to study because variants in the gene are rare, says Hui Guo, associate professor of life sciences at Central South University in Changsha, China.

In the new work, Guo teamed up with scientists and clinicians across the globe to identify and characterize 18 additional people with NCKAP1 mutations.

“This study demonstrates that international cooperation among many institutions is becoming fundamental to advancing our understanding of rare variants,” says Abha Gupta, assistant professor of pediatrics at Yale University, who was not involved in the study.

Painting a detailed picture of traits associated with NCKAP1 mutations can also improve a person’s chance of being diagnosed and provide guidance about expected outcomes, she says.

Guo asked colleagues who collect genetic data for other research to sift through their records for people with NCKAP1 variants. He also used GeneMatcher, a site that connects researchers to clinicians interested in the same genetic variants.

For each person Guo and his colleagues identified, they followed up to assess that individual’s clinical traits; they either contacted the person directly or asked medical professionals to review the person’s records.

The researchers also collected genetic and clinical information about family members of the people with NCKAP1 mutations to determine if the variants had been inherited.

In all, the team identified and characterized the traits of 21 affected people across seven countries.

“That’s a lot of work, considering how rare an NCKAP1 variant is,” says Megan Dennis, assistant professor of biochemistry and molecular medicine at the University of California, Davis MIND Institute, who was not involved in the study.

The people in Guo’s cohort ranged in age from 7 to 23 years at the time they were assessed.

The researchers diagnosed autism in 10 out of 15 participants who had been previously assessed for the condition; 2 others have autism traits but no formal diagnosis; the remaining 3 have no reported autism traits. Another 12 participants have difficulties with speech and language, 11 have delayed motor function, and 11 have intellectual or learning disabilities.

According to the clinical assessments, nine of the participants have had sleep problems and seven have experienced seizures, both of which are also associated with autism. The results were published in The American Journal of Human Genetics in November.

Guo and his colleagues further investigated the variants’ effects on NCKAP1 function by introducing mutations from five participants into cultured human embryonic kidney cells. They tagged NCKAP1 protein with a fluorescent marker to trace its location in the cells.

NCKAP1 protein is typically present throughout the cell. Two variants, though, cause it to appear mainly in the cytoplasm, suggesting that these mutations create problems with transporting the protein into and out of the nucleus.

The team also evaluated how NCKAP1 expression varies throughout development by using the BrainSpan atlas, which catalogs gene-expression data from human brain tissue from 8 weeks after conception to 40 years of age. NCKAP1 is highly expressed during the second and third month of prenatal development, and at multiple points throughout a person’s life, they found.

They also found that the spatial distribution of NCKAP1 expression across the brain most closely resembles the spatial distribution of gene clusters associated with excitatory neurons and radial glia, and not with inhibitory neurons. This pattern suggests the NCKAP1 gene has a function that is specific for these cell types — perhaps by regulating their structure or ensuring that they differentiate properly, the researchers say.

The team further compared the brains of typically developing mice with those of mice that were treated to express less NCKAP1 protein. They injected the embryonic mice with a fluorescent protein that tags nascent cortical neurons, and then assessed where those cells ended up after two or four days. In mice that express less NCKAP1, many of the neurons did not arrive at the correct final location, the team found, suggesting that the gene may play a role in the migration of these cells. That finding, though preliminary, fits with prior work tying premature NCKAP1 expression to delayed neuronal migration.

The functional studies shed some light on the mechanisms that may underlie a genetically based form of autism, Dennis says. “But in terms of being able to have any kind of actionable clinical information, there’s still more to be done.”

Guo and his colleagues plan to characterize the traits tied to rare mutations in other top autism genes, with the goal of defining specific genetic or molecular subtypes of the condition.