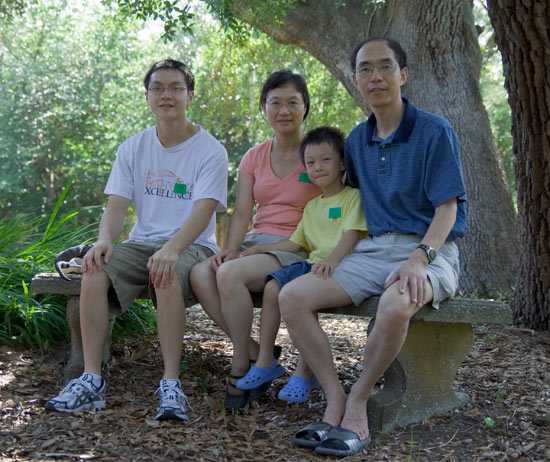 Guoping Feng never gives up. In or out of the lab, as a teenager in China or a successful neuroscientist in the US, healthy or in debilitating pain, Feng has approached every obstacle in his life with dogged persistence.

Perhaps that’s because he has faced so many obstacles in his life.

“He is sort of infinitely optimistic and infinitely energetic. Because of those two features, he has an extremely low barrier to trying out new projects, new techniques, and learning what needs to be learned,” notes Joshua Sanes, Feng’s postdoctoral advisor and director of the Center for Brain Science at Harvard University.

Feng’s perseverance has proven a boon to the hundreds of neuroscientists who rely on his most celebrated scientific achievement: two dozen mouse strains engineered to have brightly colored brain cells, allowing scientists to choose from a library of animals that each light up a specific component of the cell. In the past couple of years, Feng’s efforts have also made waves in the autism field. By creating the first robust mouse model of obsessive-compulsive disorder (OCD), Feng has found a way to study the genetic underpinnings of repetitive behaviors, one of the three core characteristics of autism.

Even these successes came only after years of failed attempts.

In early 1995, Feng was a new postdoctoral fellow in Sanes’ neurobiology lab, then at Washington University in St. Louis. Feng’s project involved trying to label cells in the mouse nervous system so that their workings could be observed under a microscope.

Using tricks of genetic engineering, Feng first induced certain cells to produce an enzyme called beta-galactosidase. Previous studies in bacteria had shown that when mixed with two other compounds, the enzyme turns blue, marking the cells that express it.

Unfortunately, Feng’s experiments with the mouse cells failed. The beta-galactosidase only works in fixed tissue, so it couldn’t be used in a live mouse brain. But the setback didn’t affect his morale.

“With most people, if something doesn’t work, they go into a bit of a funk for awhile,” Sanes says. “With Guoping, if something didn’t work, he’d start three new projects.”

“The fact that the first seven ways didn’t work did not diminish his enthusiasm for keeping at it until he finally cracked it,” Sanes says.

Now in his own lab at Duke University — and with an imminent move to the Massachusetts Institute of Technology in the spring of 2010 — Feng is applying the same tenacity to autism research.

In 2007, his team described the first well-characterized mouse model of OCD4, a condition defined by recurrent thoughts and seemingly aimless rituals. Feng’s team deleted the gene for a key protein that supports the synapse — the junction of brain cell communication — effectively turning normal mice into compulsive, round-the-clock groomers that scratch the hair right off their faces.

The behaviors Feng uncovered in the mutant mice are also seen in some people with autism. “All behaviors are basically outputs of basic circuits,” Feng says. “So even if there are many different genes and many different pathways [involved], the repetitive behaviors in autism, in [attention deficit hyperactivity disorder and] in OCD may all have a common circuitry.”

Feng is scanning the genes of children with autism for mutations in genes related to those circuits. The work will contribute to a much larger undertaking: distinguishing the rare genetic changes that are part of normal human variation from those that have unwanted functional consequences in the brain. This slow, yet steady, approach, he says, will be key to understanding the complex disorder. 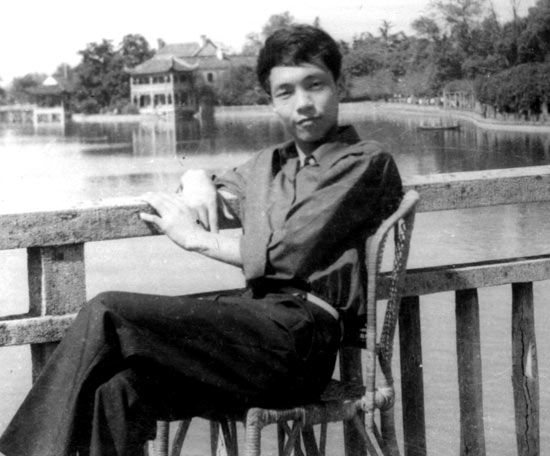 Choice or chance: China’s Cultural Revolution ended when Feng graduated from high school, and he was randomly assigned to attend medical school.
In 1976, the year Feng graduated from high school, Mao died, taking with him the forces of the revolution. Feng spent a year working as a farmer until the country’s universities slowly reopened. He was lucky to have the opportunity to go to college, but he had to apply at the same time as millions of Chinese citizens who had for a decade been denied that chance.

To meet the sudden demand, the government assigned applicants to colleges based on test scores. Feng was the only one from his high-school class of 180 students who scored above the cutoff for college placement. He was randomly assigned to medical school.

Still set on engineering, however, the then 17-year-old was extremely disappointed. “I had no choice. And I said to my Mom, ‘I really don’t want to go’,” he recalls. She eventually convinced him to go.

During a pediatrics internship in his last year of medical school, Feng became deeply frustrated by the dearth of cures for childhood cancers and other chronic illnesses.

“I was very naïve, and decided that I really needed to study pharmacology, to make more effective drugs,” he says. After getting his bachelor’s degree in medical sciences, he completed a master’s in pharmacology. “But the more you study, the more you realize that you cannot just go develop a drug without understanding the basic processes behind [the diseases],” he says.

In 1989, Feng moved 7,000 miles to begin a doctorate program in molecular genetics at the State University of New York at Buffalo. There, working in the lab of neuroscientist Linda Hall, he finally became an engineer — of fruit fly genes. His dissertation culminated in a paper, published in Cell in 1995, showing that a known Drosophila gene is crucial for neuronal firing5. 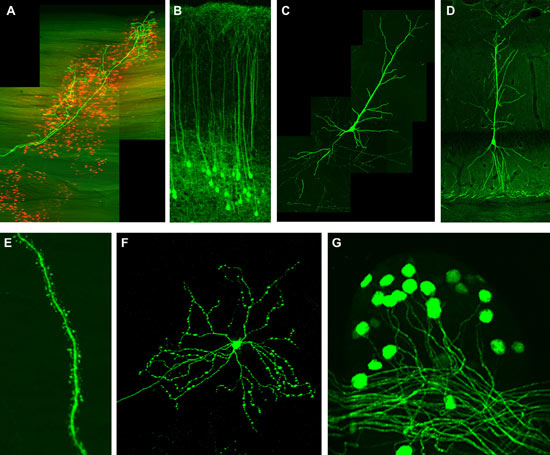 Beautiful brain: Feng is best known for creating 25 lines of mice, each of which has different subsets of glowing neurons.
By 1998, three years had passed since Feng’s failed attempt with the neuron-labeling project. Since then, a new molecule had hit the scene: green fluorescent protein (GFP), the natural substance that makes jellyfish glimmer. After GFP was first sequenced in 19926, biologists had uncovered several related fluorescent proteins, and used them to stain a variety of cells in a test tube.

Over the following two years, Feng practiced many ways to use the GFP family to tag brain cells in a living animal. He created 25 lines of mice, each of which developed different subsets of glowing neurons.

The methods paper describing the mice, published in 2000, has been cited in hundreds of publications. “These animals are in use in probably at least 200 labs. And I know that because we continue to send them out to this day,” Sanes says.

That same year, Feng launched his own lab at Duke University, where he continued to study the complex interactions of synaptic proteins and look for better ways to visualize brain cells.

Feng enjoyed the next few years settling into his new home in warm and friendly North Carolina. Around that time, he and his wife, Ning, were happily surprised to find out that she was pregnant with their second son — 14 years after the first. Just after the baby, Daniel, was born, however, Feng began having debilitating back pain.

“It was so severe, he talked about not holding Daniel for several years,” says Maria Donoghue, who met Feng when they were both working in Sanes’ lab, and is still a close friend. The pain worsened to the point where Feng could no longer come into the lab. Undaunted, he advised his team from home.

“I called him every couple of weeks to check in, and every time he’d say, ‘Oh, things are great’. Meanwhile, he’s lying on the floor of his living room,” Donoghue recalls. He refused most pain medications, she adds, “because he didn’t like what it did to his intellect.”

While he was on medical leave between 2004 and 2006, Feng published more than a dozen papers. He eventually had successful surgery, although he still has mild back pain. In addition to running his lab, he now travels often — including at least one trip to China every year — and works in the garden.

“I love seeing seeds grow — it’s an interesting developmental process,” he says with a chuckle. “I always tell my wife that when I retire, I’m going to buy a farm.”

Many projects in Feng’s lab focus on the role of scaffolding proteins that assemble near a synapse. A couple of years ago, studying one family of these proteins — called SAPAPs — inadvertently led him to psychiatric disease.

Feng had planned to create mice carrying specific mutations in SAPAP genes, to see whether and how various synaptic changes affect the animals’ behavior. Anticipating subtle differences, he formed a large collaboration with scientists who specialize in measuring mouse behaviors. As it turned out, for the mutants lacking SAPAP3, he didn’t need any help from the experts.

“The behavior was so obvious — they’re basically grooming their skin off. It’s very gross,” Feng says. The mice are the first robust animal models of compulsive behavior.

Since then, Feng has partnered with several teams of geneticists to search for SAPAP3 variations in people. Earlier this year, one such collaboration reported that SAPAP3 variants crop up in 4.2 percent of people with OCD or trichotillomania — compulsive hair-pulling — compared with 1.1 percent of healthy controls7. A later study found that human SAPAP3 variants are also associated with pathologic nail-biting and skin-picking8.

Feng is looking for mutations in SAPAP3 and about 20 other synaptic genes in 400 samples from the Simons Simplex Collection, a gene bank of children with autism and their families.

Although he hasn’t collected enough data for statistical analysis, Feng says these variations are likely to be associated with autism. SAPAP3 interacts directly with SHANK3, another synaptic protein that several studies have tied to autism.

SAPAP3 and SHANK3 are expressed almost exclusively in synapses located in the striatum — the deep, central brain region that is known to go awry in people with OCD. Some studies have also found abnormally large striatal volumes in people with autism.

If the synaptic gene variants turn out to be more common in autism than in controls, Feng plans to tackle the bigger project of determining exactly how these aberrations affect striatal circuitry, and how those changes in turn lead to the telltale behaviors of autism.

Not surprisingly, he’s up for the challenge.

“It will probably take us a long time to reach that goal, with a lot of trial and error,” he says. “But I’m very optimistic.”