It is nearly sunset, and Alysson Muotri ducks into a small, cluttered room in his expansive laboratory at the Sanford Consortium for Regenerative Medicine in La Jolla, California. An incubator the size of a mini-fridge houses unusual residents — and he wants to make introductions.

“This is the factory of mini-brains,” says Muotri, cracking a smile. His colleague holds a glass tray up to the light, and pink spheres the size of caviar whirl into view.

The spheres are 3D balls of human cells, called brain organoids — and Muotri spends his days thinking up ways to use them to study the human brain’s complexity.

The cells of these spheres form layers, just as human brains do, and show brain-like activity, passing electrical signals from one cell to the next. But they do not have the anatomical complexity of a real brain. They also cannot think or feel — at least, not yet.

Muotri coaxes stem cells to develop into globes of about 1 million cells of the types seen in the brain. He aims to understand how these quasi-brains mature — and how their patterns of activity match up to those in a human brain. To the extent they do, he hopes to use them to unravel what goes awry in autism and related conditions — and find leads for treatments.

Muotri created his first brain organoids in 2014 with stem cells from the father of an autistic boy. Two years later, he found that organoids made using stem cells from autistic children have different network dynamics than those from neurotypical controls. He has made organoids from cells toting Neanderthal DNA and those infected by the Zika virus. In July, he helped send the first brain organoids to space. The ultimate goal, he says, is to create organoids that can learn.

Some critics contend that Muotri is prone to overinterpreting his data, but most of his colleagues admire his determination to push the limits of this technology, even when that work is controversial.

“His name carries a lot of weight in trying to do things with organoids that no one has yet done,” says Ferid Nassor, assistant professor of stem cell and genetic engineering at Institut Sup’Biotech de Paris in France. “He is really trying to push the boundaries with what can be done.”

Muotri’s steadfast optimism has won over many skeptics, in fact — and won him several awards and many millions of dollars in grants.

Muotri was preoccupied with how things work even as a child. He remembers his “first deep thought,” around age 7, when he tried to figure out how a lightbulb works: “My idea was that the lightbulb was not there to send light but to suck up the darkness,” he says.

As a teenager in São Paulo, Brazil, he often immersed himself in nature, capturing fireflies in jars so he could “have light forever.” He created a time-lapse series of photos of flickering light from fireflies — one of many projects that earned him the nickname ‘The Scientist’ from family members.

As an undergraduate at the University of Campinas in São Paulo, he excelled in molecular biology, although he was always interested in the brain — and in memory in particular. But Brazil was not a hotbed of neuroscience research, so Muotri studied cancer for his graduate work at the University of São Paulo, picking up the basics of cell biology.

While at the university, Muotri tried to develop a topical gene therapy for xeroderma pigmentosum, a rare skin disease that causes extreme sensitivity to sunlight and often leads to cancer. The project required making models of skin in a dish. He traveled to biologist Alain Sarasin’s lab in France in 2001 to learn a technique that involves mixing stem cells from the skin with ‘feeder cells’ that provide support as the stem cells multiply and produce layers of skin.

But he soon realized that if he wanted to pursue neuroscience, he would need to leave Brazil altogether. In 2002, he joined Fred Gage’s team in San Diego, California, a nexus of developmental neuroscience, as a postdoctoral researcher.

“He likes to be out there on the edge,” says Gage, president of the Salk Institute for Biological Studies in La Jolla, California.

The transition from skin to brain involved a steep learning curve for Muotri. Besides, embryonic stem cells were in limited supply, as was funding for the research, because of a 2001 federal law that banned public funds for studies using the cells.

At Gage’s lab, Muotri’s work was confined to a specially equipped room supported by private donors. The plan was to turn stem cells into neurons, but that was hardly straightforward.

“Nobody knew exactly how to do that,” Muotri says. Simply keeping the stem cells alive was a challenge.

After three years of effort, Muotri reported in 2005 that he and his colleagues had transplanted human embryonic stem cells into the brains of mouse embryos. They found functioning human neurons integrated into networks in the newborn mice’s brains1.

In his haste, Muotri had missed a step: He had not sought approval from the Salk Institute’s institutional review board, which vets human research for potential harm. He received a warning.

Among the happy people was cell biologist Larry Goldstein, who was convinced Muotri’s work would speed up the stem-cell field.

“I’ve been around the block a few times; I know a lot of scientists, and I know which ones are unusual in their creativity, drive and insight — [Muotri] is one of them,” says Goldstein, scientific director of the Sanford Consortium for Regenerative Medicine.

Three years later, Goldstein recruited Muotri to join him at the University of California, San Diego, where he is a professor. 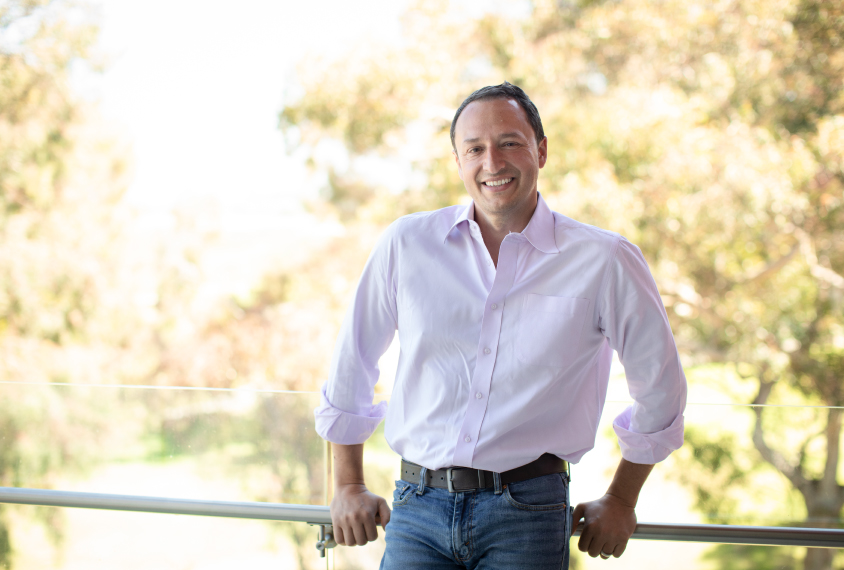 Bold plans: While others debate the merits of his scientific ambitions, Alysson Muotri likes to be out on the edge.

In his new lab, Muotri moved away from embryonic stem cells, and their ethical issues, to a type called ‘induced pluripotent stem cells,’ which are made using skin and other body cells as a starting point.

In 2010, he reported that stem cells made from the skin cells of people with Rett syndrome, an autism-related condition, generate fewer neurons than those from typical people. One television interview about this work caught the attention of Andrea Coimbra, a Brazilian woman whose son Ivan, then 5, has severe autism.

“I decided to tell him that I was living better after knowing his work and his research,” Coimbra recalls. After exchanging emails for a year, Coimbra and Muotri met at a scientific conference in Brazil — and fell in love. They married in 2016.

As he got to know Ivan, Muotri became more and more invested in finding ways to translate his work into therapies for autism.

Organoids and stem cells are not the only tools Muotri is using to study autism and to screen therapies. In unpublished work, he has found differences in neuronal activity in organoids grown from cells with the Rett syndrome mutation. After four months of growth, when the organoids are the size of mustard seeds, their cells show an electrical pattern that resembles one seen in preterm infants2. This suggests, he says, that the organoids are good models of human development.

Some researchers say this conclusion is hasty.

Muotri shrugs off the criticism. Not only that, he has set his sights on an even more ambitious project: creating an organoid that can learn.

The idea of an organoid learning or having consciousness elicits skepticism from some experts, however.

Suggesting the balls of cells have the ability to recapitulate any kind of complex thought crosses a line, says organoid expert Flora Vaccarino, professor of neuroscience at Yale University.

But others say that setting such goals pushes boundaries of science in ways that only make science better.

“As science progresses, it leaves questions that make people think, give people pause,” says Hongjun Song, professor of neuroscience at the University of Pennsylvania. “That is very good for the field.”

While others debate the merits of his ambition, Muotri is forging ahead. A video stored on his phone features a 1-foot-wide spidery robot cloaked in neon wires scuttling back and forth across a room. Unseen, the robot’s biological puppeteer directs its every move: The robot’s limbs move in response to a computer which, in turn, receives signals from an organoid in an incubator.

The robot steps at random, often bumping into walls, suggesting that the signals are not coordinated. Someday, Muotri says, he will create organoids that produce meaningful signals. With sensory feedback from the robot (say, from hitting an obstacle), the organoid might alter its firing patterns — ‘learn,’ that is — to direct the robot around the obstacle.

“Maybe he has some kind of trick up his sleeve,” says Nassor. “I believe if someone can actually do something like that, it might be in Muotri’s lab.”