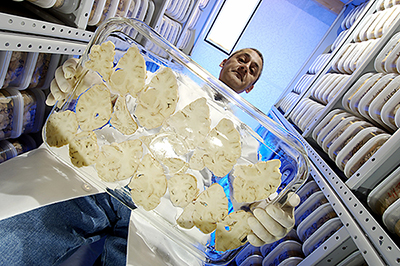 An analysis of genes expressed in the postmortem brains of people with autism has identified three molecular pathways linked to the disorder. The findings, published 10 December in Nature Communications, add to mounting evidence that the myriad causes of autism converge on common biological processes1.

“Each of these individuals probably has autism for a very different reason, yet you do see a very clear commonality,” says Dan Arking, associate professor of genetic medicine at Johns Hopkins University in Baltimore, Maryland, and one of the study’s lead investigators.

The researchers sequenced RNA in postmortem brain tissue samples from 32 people with autism and 40 controls between the ages of 2 and 82. The samples came from the brains’ outer layer, called the cortex, which plays a role in language and social skills. These are often impaired in autism.

The brains of people with autism show higher expression of genes involved in immune responses than do the brains of controls. They also show changes in the expression of some genes that play a role in signaling.

“Given that gene expression is known to be very variable, the fact that this molecular signature of autism observed in autism brains is robust across distinct methods and cohorts is a very important result,” says Irina Voineagu, senior lecturer of biological sciences at the University of New South Wales in Sydney, Australia. Voineagu was involved in the 2011 study but not the new work.

Like the older study, the new research focuses on networks of genes, called modules, that show a similar pattern of expression across brains. Each module comprises genes that characterize a particular cell type or are involved in the same function, such as communication between neurons. Arking and his colleagues identified 12 modules, 3 of which are expressed at different levels in the brains of people with autism than in controls.

The module that shows the greatest activation in people with autism, known as mod5, contains 759 genes. Many of these genes are related to activated microglia — immune cells in the brain that become activated in response to injuries and infections. These cells also help to shape synapses.

The 667 genes in mod6 are slightly more active, on average, in people with autism than in controls. By contrast, mod1 genes show decreased expression overall in people with autism. Mod1 holds 1,646 genes linked to signaling by gamma-aminobutyric acid (GABA), a chemical messenger that inhibits brain activity.

The researchers found a strong link between the dampening of mod1 and the activation of mod5 in people with autism. This suggests that microglia activation and neuronal dysfunction may go hand-in-hand, Arking says.

The third module, mod2, which contains 1,319 genes, is the only one enriched with autism candidate genes, including ADNP, ANK2, DSCAM and GRIN2B. Neither the module overall, nor any of the known candidate genes, differ in expression between people with autism and controls.

This comes as a surprise to Valerie Hu, professor of biochemistry and molecular biology at George Washington University in Washington, D.C. Hu was not involved in the new work, but has done several gene expression studies, including some comparing the gene expression profiles of blood cells from people with autism and controls. “We definitely see overlap between [autism candidate] genes and our differentially expressed genes,” she says.

Study co-leader Andrew West was less surprised. “There might be hundreds or even a thousand genes linked to autism,” says West, associate professor of neurology and neurobiology at the University of Alabama at Birmingham. “But that we would see each one in every brain deregulated in some type of common way, I don’t think aligns with the heterogeneity of the disease.”

Overall, the findings align well with those from the 2011 study. Both studies point to an enhancement of immune pathways and a dampening of neuronal signaling in the brains of people with autism.

However, whereas the older study linked the immune pathways to both activated microglia and star-shaped cells called astrocytes, the new work fingers only microglia. “We have a larger sample size, which allows us to narrow down the relevant genes that are involved,” Arking says.

The new study suggests that autism-linked mutations tend to strike genes involved in neurons’ functions. By contrast, the activation of microglia-related genes appears to be unrelated to mutations.

However, it is too early to say how neuronal dysfunction and microglia activation are related, if at all. “Are microglia responding to alterations in neuronal or synaptic function? Or could they be playing a more early and direct role in driving some of that dysfunction?” says Beth Stevens, assistant professor of neurology at Boston Children’s Hospital, who was not involved in the study. “I think that question is still out there.”

The findings fit with those from an imaging study published last year, which found that microglia are more activated in people with autism than in controls. It is still unclear whether microglia activation is helpful or harmful in the brains of people with autism. “This study raises a lot of important questions for us in the field to try to understand,” Stevens says.

The study also suggests that the many causes of autism act through common pathways, which may one day serve as targets for therapy.

“I thought it was a high possibility that autism is so heterogeneous that we wouldn’t identify any particular process that seems to be conserved,” West says. “The fact that we do gives a lot of hope that you can find a targeted and rationally derived approach to alter these states.”