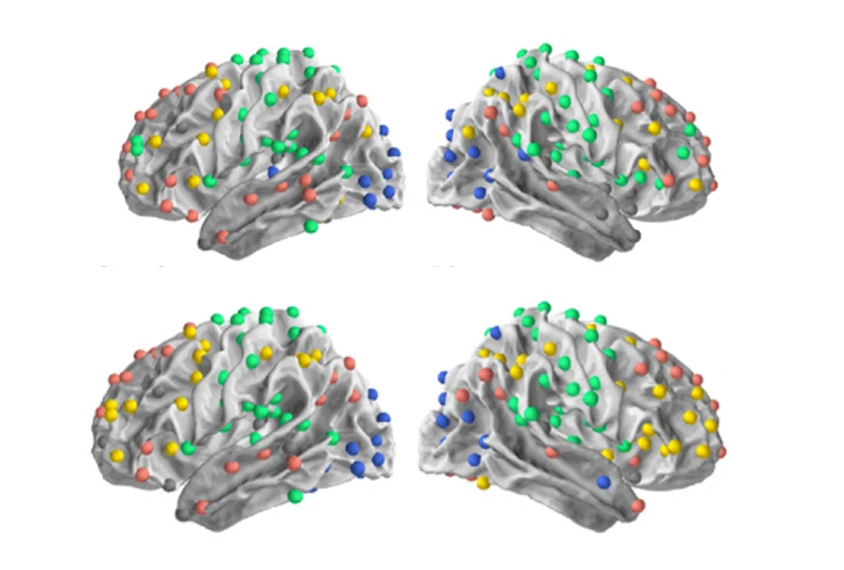 Brain power: Older autistic adults (top) have stronger connections in the visual network than their typical peers do (bottom).

Autistic adults may not experience the typical age-related decline in brain regions related to vision, according to a new imaging study1.

However, connections between other brain regions are weaker in older autistic adults than in younger ones, a pattern also seen in neurotypical people, the study found.

Imaging studies in children have found differences in patterns of brain connections between typical and autistic children, but few studies have examined connectivity in autistic adults2.

The fact that brain connections in adults with and without autism are broadly similar suggests that connectivity in autistic people may catch up in adulthood, says Hilde Geurts, professor of neuropsychology at the University of Amsterdam in the Netherlands, who led the new study.

Autistic people may “overcome some of their challenges while keeping their specific strengths,” she says.

The study offers important clues to how the brain changes with age in autism, says Annika Linke, assistant research professor of psychology at San Diego State University in California, who was not involved in the research. “They are one of the first to look at how aging and [autism] interact,” Linke says.

The researchers used functional magnetic resonance imaging (fMRI) to scan the brains of 31 autistic men, 13 autistic women, 30 typical men and 15 typical women. The participants were 30 to 74 years of age.

The team scanned the participants’ brains while they completed two cognitive tasks and again while they were at rest. In one task, they pressed a button to differentiate between images of complete and incomplete human faces. In the other, they tracked a moving image on a screen and had to determine whether the image was red or green.

In the default mode network and the frontoparietal control network, those younger than 50 in both groups tend to have stronger connections than those who are 50 or older, the team found. That matches the typical trajectory in adulthood, with neuronal connections declining in strength as a person gets older. The study was published in January in Molecular Autism.

In the visual network, however, the researchers observed a different pattern: There, older autistic people have stronger neuronal connections than typical people of the same age.

This is consistent with the idea that autistic people have superior visual abilities, although some studies have found evidence to the contrary. Geurts and others reported in 2016 that older autistic adults have stronger visual skills than their neurotypical peers do3.

The new results may reflect the neuronal roots of this difference, although Geurts cautions that it is challenging to draw a direct line from brain activity to behavior.

The team also found that, unlike the participants in the typical group, the autistic participants’ performance on cognitive tasks did not slow with age. Other studies have reported fast reaction times to such tasks in autistic adults4.

The study included relatively few participants. Still, the results suggest that autistic people are more resilient in some ways than their neurotypical peers, says John Van Horn, professor of psychology and data sciences at the University of Virginia in Charlottesville, who was not involved in the work.

However, because the researchers scanned the participants’ brains at only one point in time, it is impossible to say how the brains change over time. “It would be really nice to be able to find some samples where they have been followed throughout their lifetime, which I realize is a tall order,” Van Horn says.

Geurts and her colleagues are studying how cognition and mental health change with age in autistic adults.