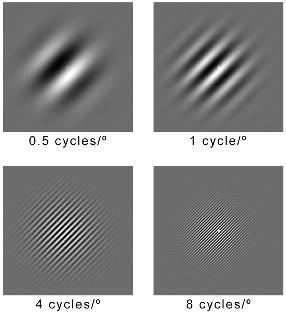 Eagle eyes: When children with autism look at these ‘Gabor patches’, their brain response is about 20 milliseconds faster than in controls.

In the 1970s, when animal scientist Temple Grandin began her research on livestock behavior in Tempe, Arizona, she noticed that cattle are often spooked by seemingly insignificant visual details, such as a yellow hose on the ground or light reflecting off a piece of metal.

Grandin, who was diagnosed with autism in 1950, says that she has always had extraordinary vision, but “never really thought anything of it”. When she sits at a boring meeting, for instance, she says she often studies the tiny pattern variations in the carpet beneath her; when she drives at night, she sees so clearly that she sometimes forgets to turn on the headlights.

This ‘eagle-eyed’ vision, characteristic of many people on the autism spectrum, stems at least in part from abnormal variations in the early stages of visual processing, according to two reports published in the January issue of Biological Psychiatry.

The first report, published by researchers at the University of Sheffield in England, found that when children with autism look at simple line diagrams, the aggregated response of all of their brain cells occurs fractions of a second sooner than in healthy controls1.

In the second study, psychologists at the University of Cambridge’s Autism Research Centre found that compared with healthy controls, high-functioning adults with autism score twice as high on standard tests of visual acuity ― the ability to resolve fine detail in an image2.

“When a person with autism walks into a room, the first thing they see is a stain on the coffee table and 17 floor boards,” says Elizabeth Milne, a lecturer in cognitive neuroscience at the University of Sheffield who led the first study. These new studies agree with previous work showing that people with autism have “a tendency to focus more on local details, often at the expense of the bigger picture,” she says.

Many anecdotal reports3,4 have described extra-sharp vision among people with autism but, so far, no large epidemiological study has estimated its prevalence.

“Now people are starting to show more of an interest in the lower level,” says Milne, referring to early aspects of visual processing, such as the response of retinal cells to a light stimulus, or a brain cell’s first response to a single black line.

“There really is room for more of this kind of low-level visual testing in people with autism, but that has to be done in collaboration with visual psychophysicists,” says Steven Dakin, a reader in visual psychophysics at University College Londonʼs Institute of Ophthalmology who was not involved in either study.

“The balance of evidence of there being a difference in visual processing in people with autism is overwhelming,” he says. “But the story is almost certainly more complicated than a simple difference in acuity.”

In humans, rays of light travel along a biological path with many stops before the brain transforms them into a meaningful image.

Once it enters the eye, light hits specialized cells of the retina, called photoreceptors, which convert it into electrical signals. Neurons in a small region at the back of the brain, called the primary visual cortex or V1, receive these electrical signals. Depending on their type, the V1 neurons fire selectively for aspects of ‘low-level’ perception, such as the angle of the light stimulus or the direction in which it is moving. They then pass the signals on to neurons in other brain regions that are selective for aspects of ‘high-level’ vision, such as perceiving a face as a face, rather than as an assemblage of shapes.

Ring of vision: In this test of Landolt rings, the visual acuity of the autism group is more than twice as high as the control group, on par with that of eagles.

Previous vision research on people with autism has used paradigms that assess the participants’ ability to identify, think about or mentally manipulate visual images.

For instance, in the ’embedded figure’ paradigm, participants must scan a complex image containing many different shapes, and find a smaller shape embedded within it. Studies have repeatedly found that people with autism perform faster and more accurately on the task than do healthy controls5.

Similarly, in the ‘block design’ test, in which participants arrange three-dimensional blocks with different colored sides to match a drawing, people with autism consistently perform better on the task than do healthy controls6.

Milne’s new study is one of the first to assess less cognitive, and more sensory, aspects of visual perception. Using electroencephalography (EEG) ― a non-invasive method of measuring the aggregated activity of millions of neurons via electrodes on the scalp ― she measured the brain response of 18 children with autism and 18 healthy controls as they looked at images of parallel black lines, called Gabor patches, on a computer screen.

“We wanted to use a very simple stimulus with no social component that could be a potential compound,” Milne says. “Cells in area V1 respond most vigorously to black and white striped lines.”

When children with autism look at the Gabor patches, the EEG response is about 20 milliseconds faster than in healthy controls, Milne found. The response in the autism group is also less affected by spatial frequency ― high-frequency patches have many parallel black lines on a white background; low-frequency patches have only a few ― than in the control group.

“Speculating to the neural level is a bit difficult to do with any certainty, but it seems that the autistic brain is less sensitive to the different types of stimuli,” Milne says.

The second new study focused on another measure of low-level visual processing: visual acuity. Sitting in front of a computer screen, 15 adult males on the autism spectrum and 15 healthy controls took a common eye test using an image called a ‘Landolt ring’, an O shape with a small gap. In the test, participants look at progressively smaller versions of the Landolt ring and identify the position of the gap in the ring; the smaller the ring they can correctly spot, the better their visual acuity.

The study’s results are striking and unexpected: The visual acuity scores of the autism group are more than twice as high as the control group, on par with that of eagles.

“We didn’t expect to find such great differences between the groups,” says Emma Ashwin, a doctoral student at the Autism Research Centre who did the research. “It was definitely a very exciting finding.”

People with autism might have enhanced visual acuity because of densely packed photoreceptor cells in their retinas, the researchers suggest. But others are skeptical.

“There are limits on that packing density, and I would be surprised if those limits could be expanded sufficiently to accommodate the increase in acuity that they’re reporting here,” says University College Londonʼs Dakin.

Dakin also notes that the study has significant methodological flaws. For instance, the Landolt ring test is usually conducted with participants sitting or standing three meters away from the image. In this case, they sat just 60 centimeters from the computer screen.

At that distance, the participants would have to be looking at extremely small versions of the stimuli, Dakin says. At a 60-centimeter distance, in order to verify the autism group’s average acuity score of 2.79 ― roughly equivalent to a 20/7 vision, meaning that those participants can see clearly at 20 feet what average people see clearly at 7 feet ― the Landolt ring would have to be only slightly bigger than a single pixel of the computer screen. “The whole ‘C’ would have to fit onto that, and you just can’t do that,” he says. At the standard three-meter distance, the difference in acuity between the two groups is unlikely to have been significant, he adds.

Moreover, because the test was repeated on each participant 150 times, Dakin says that some of the difference between the two groups may be due to attention rather than visual acuity. “It’s probably just that people with autism are better at staying on task,” he says. “Normal observers get bored when shown an easy stimulus.”

Ashwin says she learned of the “potential technical issue” with the 60-centimeter viewing distance only after she completed the experiments, but says it doesnʼt compromise the validity of the results. Because the distance to the computer, and the program measuring the acuity, were the same for all participants, “it would be very weird for [the program] to find such marked group differences,” she says. Still, her team plans to redo the experiments using a longer viewing distance.

Also unresolved is how any difference in visual perception is linked to autism’s core social and communication deficits.

One possibility is that people and social situations are complex and dynamic ‘wholes’ made of many parts ― such as moving mouths, eye contact, or body language ― any of which could distract people with autism. If people with autism can’t see the social ‘big picture,’ Ashwin says, then, “processing in this higher social level could be impaired.”

In 2005, Dakin and Uta Frith, emeritus professor at the Institute of Cognitive Neuroscience at University College London, proposed that the connection between abnormal visual acuity and social deficits in autism could stem from abnormalities in the superior temporal sulcus ― a ridge on the brain’s temporal lobe that is involved in processing motion and in integrating sights and sounds7.

The ridge is instrumental in perceiving faces and biological motion, both of which have been shown to be impaired in autism.

“It’s part of a bigger view that perceptual processing deficits in autism ought to do with putting information together, integration,” Dakin says. “So it may be a problem across [sensory] modalities.”