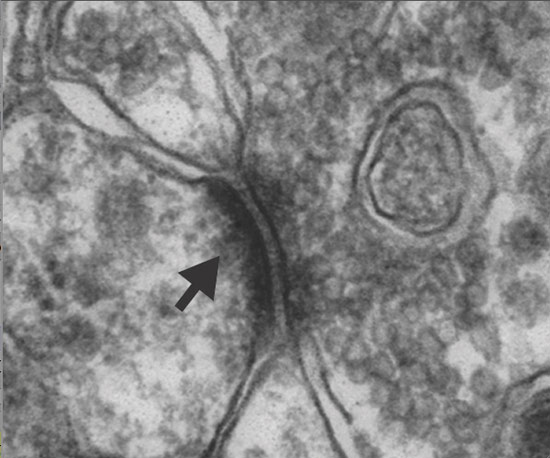 Researchers have created a mouse carrying a deletion in SHANK3, an autism candidate gene, they reported yesterday in Nature1. This is the second model of SHANK3 mutations but shows markedly more behavioral and brain defects compared with the first.

Guoping Feng and colleagues report that the mice have impaired social interactions, ugly skin lesions caused by obsessive grooming, and abnormal molecular machinery at the synapse, the junction between neurons.

Looking at neurons in the striatum — a deep brain region that is involved in planning and movement — the researchers found a dearth of several synaptic proteins, and abnormally long and thorny neuronal branches. The striatum receives many messages from the outer region of the brain. These connections are weak in the mutant mice, the researchers found.

The striatum has been shown to regulate compulsive and repetitive behaviors, but this is among the first studies to tie the region to social interactions, notes Feng, professor of brain and cognitive sciences at the Massachusetts Institute of Technology.

“We hadn’t found a really robust gene that allows us to figure out what’s the circuitry and brain region responsible for the social deficit [in autism],” he says. “That’s why I think this is really exciting.”

SHANK3 lies on the tip of chromosome 22, in a region that is missing in Phelan-McDermid syndrome, a rare disorder that causes mental retardation, speech delays and, often, autism.

The gene made a splash in the autism field in 2007, when French researchers identified several children with autism who carry SHANK3 mutations3. Since then, at least five different groups have tried to engineer mice lacking the gene.

The first to publish on a SHANK3 mutant mouse, in December4, was Joseph Buxbaum, professor of psychiatry at Mount Sinai School of Medicine in New York. That mutant shows faulty connections in the hippocampus, but relatively mild social impairments.

SHANK3 is unusual in that there are several spots along the gene that transcribe different parts of the protein. Buxbaum’s group, like most of the others, zeroed in on a region at the front end of the gene that encodes a section of ankyrins, subunits of the SHANK3 protein. This effectively blocks transcription of part of the gene, but not all of it.

“Everybody tried that same strategy, and that strategy fails,” says James Pickel, director of the Transgenic Core Facility at the National Institute of Mental Health.

In the new study, Feng made two different mutants, one based on the old strategy and a second that disrupts a spot in the middle of the gene called the PDZ domain. The second approach damages nearly all of the protein, and the animals are more severely affected.

By the time they’re 3 to 6 months old, about one-third of these mutants develop severe skin lesions on the face or the back of the neck. Videotapes of the cages show that the wounds are self-inflicted: the animals compulsively groom the hair off of their skin.

They also have significant social problems, as assessed by the famous ‘three-chamber’ test. In this test, when a healthy mouse is placed in a room with two adjacent chambers, one containing another mouse and one with an empty cage, it eagerly explores the chamber with the mouse. By contrast, Feng’s mutants prefer the empty cage.

In the second phase of the test, researchers add a second new mouse in place of the empty cage. Healthy mice are immediately curious about the new playmate and move into its chamber. The mutants instead go to the middle room, avoiding both of the other animals.

“For the social interaction abnormalities, the data look quite convincing. These are not subtle,” notes Laurence Tecott, professor of psychiatry at the University of California, San Francisco, who was not involved in the work.

Still, the argument would have been stronger if the researchers had ruled out the possibility that pain from the skin lesions affects the animals’ social behaviors, he says. “If I had a large, inflamed skin lesion like that, I might not be as social, either.”

On rare occasions, the mutant mice also have seizures during human handling. If the animals have subclinical seizures that aren’t noticeable to the naked eye, that also could influence their social interactions, Tecott notes.

Despite these caveats, the new study reveals an array of behavioral and molecular insights on a very promising gene, experts say.

Because people with autism carry different kinds of mutations in SHANK3, it’s particularly useful that the study directly compares two types of disruptions.

“They have done the same experiments with both lines of mice, and they found distinctly different consequences on behavior,” says Jacqueline Crawley, chief of the Laboratory of Behavioral Neuroscience at the National Institute of Mental Health, who carried out the behavioral tests on Buxbaum’s SHANK3 mice. “That is really important to the field, because we need to understand the consequences of having a SHANK3 mutation in one part of the gene versus another part of the gene.”

Another boon to the field is the study’s focus on the striatum, a region that has not received a lot of attention.

Part of the brain’s ‘reward system,’ the striatum is activated during pleasurable activities, such as receiving money or looking at a happy face. Some imaging studies have found that children with autism have abnormally low striatal activity.

“There could be a social reward to interacting with other people,” Feng says. “If you don’t have a [healthy] reward system, then you might see humans and objects in the same way.”

A 2005 imaging study also showed that in people with autism, a larger-than-normal striatum correlates with repetitive behaviors2. Another report found that in individuals with autism, the striatum gets larger rather than smaller with age.

In the new work, the SHANK3 mice showed a small but statistically significant increase in the volume of the caudate, a subregion of the striatum, compared with controls.

“[The new study] might bring a real shift in where we think the mechanisms of autism are,” Pickel says. Most autism researchers have focused on the hippocampus, a region involved in learning and memory, he says. “But there’s a lot of higher processing through the striatum to the cortex. So it might be that that’s where things are going wrong.”