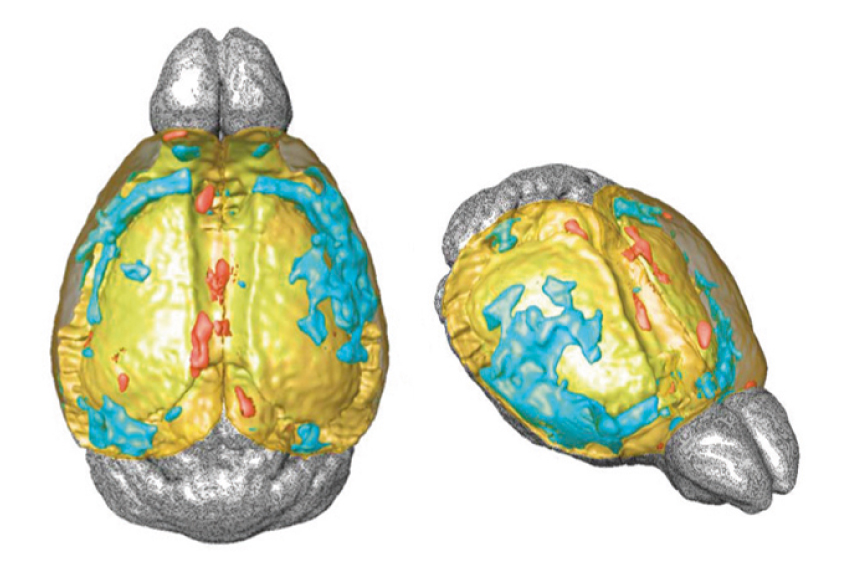 Slim pickings: Mice that carry a mutation in the CUL3 gene have unusually thin cortical tissue (shown in yellow) across their brains.

Autism-linked mutations in the CUL3 gene may alter brain structure by disrupting the ‘skeletons’ of neurons, according to a new study.

Like all cells, neurons contain long strands of protein that help them keep their shape. These strands, collectively called a cytoskeleton, also help ferry substances within cells and enable developing cells to migrate through the brain.

Mice engineered to have a CUL3 mutation that resembles one seen in an autistic person show atypical expression of a variety of cytoskeleton proteins, the new work shows. These mice exhibit some autism-like social behaviors — for instance, unlike wildtype mice, they display no preference for a novel mouse over a familiar one. In addition, various cortical regions in the CUL3 mice are smaller than in wildtype mice, and their cortices are, on the whole, thinner.

The brain and behavioral differences observed in these mice may be linked to cytoskeletal abnormalities, says lead investigator Lilia Iakoucheva, associate professor of psychiatry at the University of California, San Diego.

Mutations in CUL3 could lead to cytoskeletal changes via RhoA, an enzyme linked to autism, Iakoucheva says. RhoA carries out some of the effects of mutations in KCTD13, an autism-related gene that works with CUL3, according to past work by her team.

The new study represents an important step forward in understanding the link between Rho enzymes and autism, says Froylan Calderón de Anda, research group leader at the Center for Molecular Neurobiology Hamburg in Germany, who was not involved in the work. “Little by little, we are adding to this puzzle.”

The protein encoded by CUL3 helps mark other proteins — including RhoA — for destruction. So Iakoucheva and her team measured how the CUL3 mutation affects RNA and protein levels in the brain.

They found changes in genes and proteins associated with a host of cellular functions — but a consistent pattern emerged: “Almost everything we looked at strongly pointed toward a deficit in cytoskeleton,” Iakoucheva says.

The CUL3 neurons also had unusually short dendrites, the branches of the neuron that receive signals. Short dendrites could reflect deficits in the cytoskeleton, and they may impair the cells’ ability to form synapses with other neurons, the researchers say. In line with this idea, the neurons showed much less spontaneous activity than their wildtype counterparts did.

Treating the CUL3 neurons with a substance that inhibits RhoA enabled the dendrites to grow to a normal length.

Because the short dendrites seem to alter neuronal activity patterns, they may partially account for how a CUL3 mutation causes behavioral differences. But Iakoucheva and her colleagues also found additional possible contributors. They documented a range of differences between CUL3 and wildtype mice, such as increased cell death, altered neuron development and a thinner cortex.

It’s unlikely the cytoskeleton can account for all of the differences between CUL3 and wildtype mice, Iakoucheva says. “It’s probably only one side of the coin.”

Iakoucheva and her team have some theories. The cytoskeleton plays a critical role in neuronal migration, the process by which new neurons travel to their permanent locations in the brain. Defects in migration might hinder neurons from reaching the cortex, which could explain why CUL3 mice have thinner cortices than their wildtype counterparts, Iakoucheva says.

Unpublished work by a different team supports this idea and describes a number of migration deficits in a different set of CUL3 mice. For instance, these animals have atypical levels of cytoskeletal proteins and actin abnormalities like those that Iakoucheva’s team found. But unlike in Iakoucheva’s mice, the actin-binding proteins in these mice are upregulated.

There may be a simple explanation for the discrepancies between studies, says Lin Mei, professor of neurological diseases at Case Western Reserve University in Cleveland, Ohio, who led the work that homed in on EIF4GI. Iakoucheva’s model, which he calls “beautiful,” was designed to mimic a human mutation. Mei’s mice, on the other hand, lack CUL3 entirely in neurons and astrocytes.

“I don’t think there’s any conflict,” he says. “The insight [Iakoucheva’s team] provided actually gives us a hint about which areas we should focus on.”