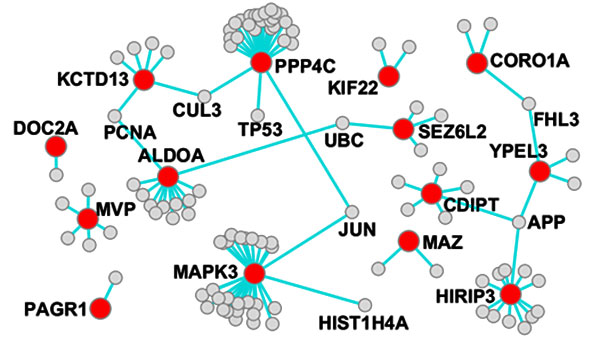 Hot hubs: Researchers have mapped the binding partners of proteins encoded by the 16p11.2 region (red).

Missing a swath of chromosome 16 with strong ties to autism disrupts proteins that are crucial for early brain development, according to a study published 18 February in Neuron1.

The findings open the door to targeted interventions, says lead researcher Lilia Iakoucheva, assistant professor of psychiatry at the University of California, San Diego. “Getting to this more specific pathway is very valuable,” she says.

To tease out the role of genes in the 16p11.2 region, the researchers mapped where and when these genes are expressed in the brain. They identified possible binding partners for the corresponding proteins at the same time and place.

One such binding partner, CUL3, lowers the levels of RhoA, a protein that guides neurons to their correct home in the brain. The researchers speculate that when the 16p11.2 region is missing, RhoA production increases midway through fetal development, when CUL3 is normally expressed. This in turn disrupts the development of the brain’s outer layer.

Other autism-linked mutations are known to affect RhoA, making it a possible point of convergence for the disorder.

“Being able to target a particular site in the brain and target a particular time point in brain development is just fabulous,” says Nicholas Katsanis, professor of cell biology at Duke University in Durham, North Carolina, who was not involved in the study. “That was the coolest thing about the paper.”

The new study takes a novel approach by using available information on protein interactions and the timing of gene expression.

The researchers used these data to map the binding partners for proteins encoded by 16p11.2. They then used BrainSpan to pinpoint when and where in the brain the protein partners might work together. This repository houses data on protein expression, collected from 57 postmortem brains from people of various ages.

The results suggest that deletion of 16p11.2 has the greatest impact on a developing fetus between 16 and 20 weeks of gestation. This jibes with previous findings that some of the strongest autism risk genes are at work during this time.

“This represents an important complement to the oft-asked question of what autism genes and proteins do — that is, when and where they are doing it,” says Matthew State, chair of psychiatry at the University of California, San Francisco, who was not involved in the study.

One gene in the 16p11.2 region, called KCTD13, is thought to underlie the large head size associated with 16p deletion. Iakoucheva and her team confirmed that KCTD13 interacts with CUL3, which keeps RhoA levels in check.

Previous studies have reported mutations in CUL3 in people with autism2,3. The new study shows that these mutations disrupt CUL3 binding to KCTD13. It also strengthens these proteins’ link to RhoA.

The findings finger the RhoA pathway in two different causes of autism: deletion of 16p11.2 and mutations in CUL3.

“It’s very nice to have a different group come in with a completely orthogonal approach and land in the same patch that we’re in,” says Katsanis. In 2012, Katsanis showed that dampening KCDT13 levels in zebrafish leads to a 20 percent increase in head size. Boosting the gene’s expression does the opposite. “For me, this says that using different model organisms and different approaches can lead to biological truth.”

Although the new study focuses on 16p11.2, Iakoucheva and her team studied variants in six other regions linked to autism and other developmental disorders. Each of these regions has a distinct expression pattern in time and space.

For example, proteins encoded by the chromosomal region 22q11.2, which is linked to schizophrenia, tend to be the most active up to adolescence. This is intriguing, as schizophrenia usually manifests in adolescence.

“The finding is also an important confirmation of what I think many people suspect — that there will be different points of convergence for different genetic risk factors,” says State.