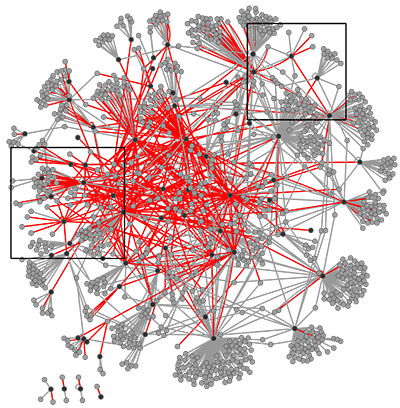 Network expansion: The new map increases the number of interactions (red) thought to occur between autism-linked proteins (gray) by 51 percent.

Researchers have mapped interactions between hundreds of variants of proteins made from known autism risk genes, they reported 11 April in Nature Communications1. The highly connected network reveals that autism genes tend to interact with each other and with many more partners than suspected.

Dubbed the Autism Spliceform Interaction Network, the map is the first to chart relationships between variants of the proteins linked to autism. Understanding the relationships between these variants may reveal the molecular pathways involved in autism. The researchers presented preliminary results from the study at a conference in early 2013.

Each gene can produce multiple versions, or isoforms, of its protein through a process called splicing. In this process, messenger RNA pieces together different segments of the gene to form alternate protein templates. Each of the resulting proteins can perform a different function.

“Splicing is a process of generating protein diversity, and the brain is one of the tissues with a high level of alternative splicing events,” says lead investigator Lilia Iakoucheva, assistant professor of psychiatry at the University of California, San Diego. This may be one reason for the brain’s tremendous plasticity, its ability to change in response to experience.

Researchers typically build networks of gene interactions using a single protein variant for each gene. These reference proteins act as stand-ins for all of the variants made by the gene. Researchers can then use the networks to find additional targets for drugs based on the interaction partners of the initial target.

However, the simplified networks may miss many interactions between proteins that are key to the disorder. For example, Iakoucheva and her colleagues found that the variants can interact with entirely different suites of partners than a reference protein does.

“By including the different variants of the same protein, we got a higher-resolution view of the network,” she says.

The new map may also help to uncover the roles of proteins by revealing how they interact with other proteins of known functions.

“This is the first step to allow us to begin to understand the interactions between the diversity of different protein isoforms in the brain — in general, not just in autism. We haven’t really looked at that before,” says Huda Zoghbi, director of the Neurological Research Institute at Texas Children’s Hospital, who was not involved in the study.

Zoghbi created an interactome, or network of interacting proteins, for autism-related syndromes such as Rett and fragile X. She also constructed one for inherited ataxias, disorders that interfere with balance and coordination.

Zoghbi notes that the new network provides a framework for identifying key genetic segments that, when disrupted, can derail specific interactions, potentially leading to autism.

To create the network, the researchers mapped all the protein variants that can be made from 124 known autism candidate genes. Looking for gene expression in fetal and adult postmortem brain samples they found 373 proteins corresponding to the candidate genes. More than 60 percent of the isoforms the researchers produced were not listed in any protein reference database.

The researchers supplemented this initial group with protein variants built from a collection called the ORFeome 5.1. This expanded their library to 422 protein variants made from 168 genes. They used these isoforms to fish for any new interactions with yeast proteins, and among the isoforms themselves.

Because each isoform is made from a slightly different combination of a gene’s segments, the interactions help researchers pinpoint the specific parts of an autism gene that are important in the disorder.

For example, five of the seven interactions between isoforms of GTF21, a gene linked to autism, did not include its reference version. This means the researchers identified five new genes that GTF21 influences. Most of the protein interactions of STX1A, another autism-linked gene, also involved new isoforms.

Overall, they found new interactions with the proteins of 31 genes, including 11 previously implicated in autism, such as FOXP2, BZRAP1 and DLGAP2. The rest are genes such as GOLGA2, which is involved in the transportation of lipids and TCF4, which is involved in nervous system development.

“By considering the different variants that are not used as a reference, they can identify additional connections between genes,” says Chaolin Zhang, assistant professor of systems biology at Columbia University Medical Center, who was not involved in the study. “This helps us to understand whether these genes work together to converge on certain molecular pathways,” he says. “It helps us understand the common functions of the genes mutated in autism.”

The study is solid in that it is based on a physical screen of the proteins, rather than a literature search, and it generated high-quality data, says Zoghbi. “The beauty of the study is twofold.”