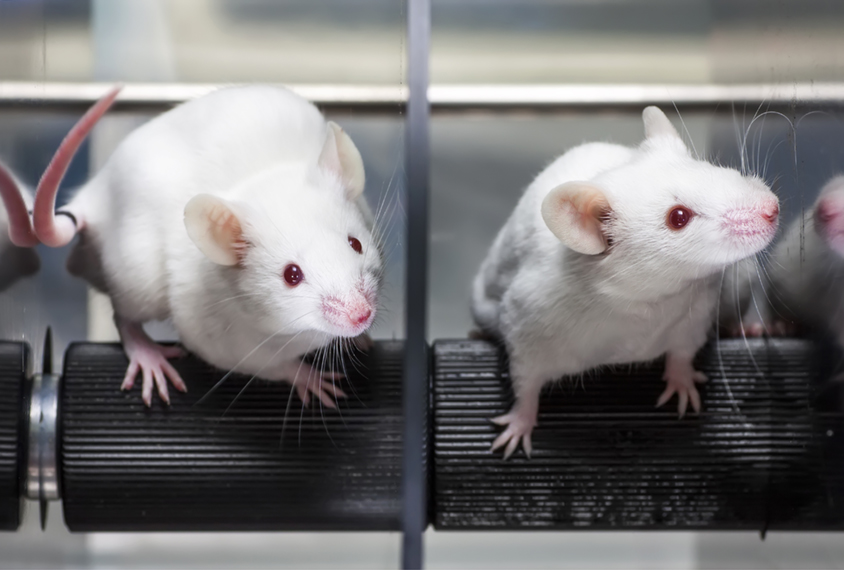 Balancing act: An extra copy of the gene involved in Rett syndrome reverses traits, such as poor motor control, in male mice modeling the condition.

Therapies that boost levels of the protein MECP2, which is deficient in most people with Rett syndrome, may not help everyone with the condition, according to a mouse study presented virtually yesterday at the 2021 Society for Neuroscience Global Connectome. (Links to abstracts may work only for registered conference attendees.)

The unpublished study adds to evidence that the optimal level of MECP2 in cells is a matter of careful titration. But it also suggests that therapies targeting MECP2 levels hold promise for people with conditions other than Rett syndrome.

Rett syndrome is an autism-linked neurodevelopmental condition that involves repetitive hand movements, breathing difficulties and developmental delay. Most cases are caused by mutations in the gene MECP2 and loss of the protein it encodes, a transcription factor that regulates the expression of thousands of other genes.

Trying to restore the protein levels, however, gets tricky because too much MECP2 can be harmful: People who carry an extra copy of the MECP2 gene have a constellation of traits, known as MECP2 duplication syndrome, that includes seizures, muscle spasms and sometimes severe intellectual disability.

In the new study, researchers crossbred mice that have an extra copy of MECP2 with mice carrying a mutated copy of the gene. The mutation, known as R133C, results in a partially functional form of MECP2 protein and is seen in about 7 percent of people diagnosed with Rett syndrome.

“In humans, that mutation results in a milder phenotype,” says study leader Colleen Niswender, professor of pharmacology at Vanderbilt University in Nashville, Tennessee.

Both male and female mice with the partially functional copy of MECP2 have characteristics similar to those of other mouse models of Rett syndrome. When held upside down by their tails, for example, they clasp their hind limbs close to their body rather than splaying them out like wildtype mice. They also have coordination deficits, decreased anxiety and problems with learning and memory.

The mice with an extra copy of MECP2 have opposite characteristics to those of Rett syndrome mice. For example, the R133C mice fall off an apparatus that tests balance and coordination sooner than wildtype mice do, but the MECP2 duplication mice stay on for longer.

“I think this gives caution that MECP2-targeted therapies may not be one size fits all for the clinical population,” says Sheryl Anne Vermudez, a graduate student in Niswender’s lab who presented the findings. “It might be one of those where we have to tailor treatments for each patient, depending on what mutation they have.”

The researchers also crossbred mice that have an extra copy of MECP2 with mice lacking one copy of TCF4, which codes for another transcription factor implicated in a condition called Pitt-Hopkins syndrome. Pitt-Hopkins and Rett syndromes share many traits.

Mice lacking one copy of TCF4 are hyperactive, have decreased anxiety and show learning and memory deficits. But inheriting an extra copy of MECP2 normalizes these traits.

“When we decided to do these studies, I was sort of like: I don’t know what’s gonna happen here,” Niswender says. “So it was very interesting when the behaviors were basically reversed” by extra MECP2 in both the TCF4 mice and the male R133C mice.

The researchers analyzed gene expression in the hippocampus and striatum of the TCF4 mice. Extra MECP2 does not impact the level of TCF4 messenger RNA produced by cells, the researchers found. However, a preliminary analysis suggests that it normalizes expression of some of the genes disrupted in the TCF4 mice. It’s not yet clear what mechanism accounts for this, Vermudez says.

The researchers are conducting similar studies exploring the effects of an extra copy of MECP2 in a mouse model of CDKL5 disorder, which causes seizures, low muscle tone and developmental delay.